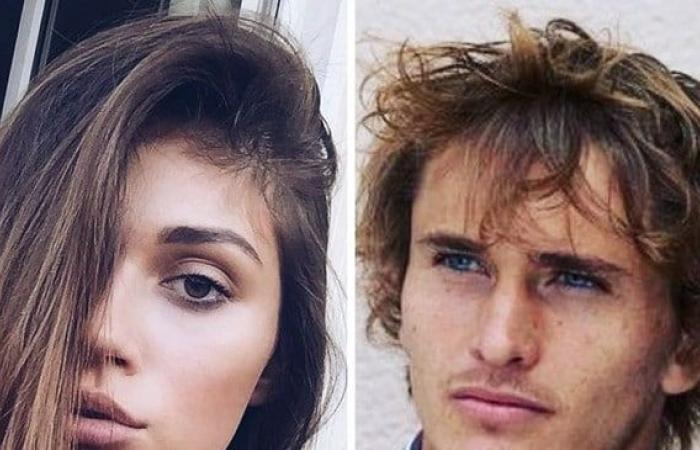 Tennis star Alexander Zverev has denied his ex-girlfriend’s allegations that he tried to strangle her and hit her head against a wall at the 2019 US Open.

Olya Sharypova, 23, dated the German world no.7, also 23, a few years before their split last year, claiming she was a victim of domestic violence on Instagram this week.

The Russian photographer didn’t specifically name Zverev, but when she was contacted by the Russian Outlet Championship, she confirmed that he was the subject of her post.

Sharypova claimed Zverev tried to strangle her with a pillow in an attack before the tournament where Zverev reached the fourth round made her fear for her life.

Zverev called the allegations “unfounded” and “simply not true” in a statement published on Twitter.

“The unfounded accusations of my ex-girlfriend Olya Sharypova, which I read in the media today, make me very sad,” wrote Zverev. “We have known each other since childhood and have shared many experiences. I am very sorry that she makes such statements. Because the allegations are just not true.

“We were in a relationship that ended a long time ago. I just don’t know why Olya is making these accusations now. I really hope we can both find a way to be sensible and respectful of one another again. ”

Sharypova’s translated post – accompanied by a recording of her in front of the Colosseum in Rome – read: “I was a victim of domestic violence! The first time this happened at the beginning of this relationship there was an argument and I was hit against the wall with my head with so much force that I sat on the floor.

“In August of this year I ran out of the hotel barefoot. I stood on the streets of New York with no idea where to go or what to do. They tried to choke me with a pillow, hit my head against the wall, turned my hands and at that moment I was really scared for my life. This was a far cry from the first and not the last situation I grew up in a relationship. It was the worst thing because at some point I couldn’t breathe.

“To be honest, I remember that time very well because there were no colors of life, a fog, and a lack of understanding. I was a different person, believed in love and tried to keep it. But people don’t change, as time shows. ”

When asked by Championat whether Zverev – known as Sasha – was the person in question, Sharypova said: “On that day, I only went for a walk with Daria Medvedeva (wife of Russian tennis star Daniil Medvedev) and my boyfriend.

“We lingered a bit and Sasha got mad about it. When I got home we had an argument. Our disputes always started from scratch. I wrote on Instagram that he tried to strangle me with a pillow, twisted my arms. I tried to run out of the room several times but he wouldn’t let me. I was afraid that someone would see and hear us. But in the end I managed to break free and ran away barefoot.

“At first I was hiding in a hotel, but Sasha went downstairs and found me. We stood near the side entrance. I sobbed and tried to leave and he wanted me to go back into the room and we could talk. But I understood that there would be no dialogue at that moment. I was scared and wanted to run away. But Sasha pressed me against the wall and said he wouldn’t get anything in return.

“Fortunately, people showed up at that moment and I hurried out onto the street with them. I was alone, barefoot in the middle of the street. After this situation, Sasha wrote to me and called me. At first I didn’t want to see him, but I decided we still need to talk. I arrived at the hotel and waited for him in the lobby because I didn’t have a room card.

“While we were corresponding with Sasha, we started swearing with him again. I sat in the hotel toilet and cried. And when he got to the hotel he just threw my things in the lobby. ”

Sharypova claimed in both her post and interview that Zverev’s alleged violence was not a one-off and occurred multiple times during their relationship.

Sharypova is also an accomplished tennis player and has been featured on social media by Russian-born Australian player Daria Gavrilova.

Zverev, who reached this year’s US Open final last month, also insisted he was ready to “live up to my responsibilities as a father” after another ex, Brenda Patea, claimed this week she was pregnant with his child and want sole custody of the baby.

Patea announced in an interview with Gala Magazine via Bild that she was 20 weeks pregnant.

“I’m 20 weeks pregnant and expecting Alex to have a baby,” she said. “That is out of the question for me (joint custody). The child was not planned, but I will do everything I can to ensure that it grows up in a harmonious environment. I am in the fortunate position of being able to raise the child on my own. ”

She added on Instagram, “The allegations I am talking about are related to custody. Yes, I am seeking sole custody of the child and for good reason, but they are private. I have no contact with Alex, but I want to make it very clear here that I will not forbid him to seek contact with the child, on the contrary! ”

In his Twitter statement, Zrevev wrote: “I’ll be a father when I’m 23 years old. And I’m really looking forward to the child. Although Brenda and I are no longer together, we have a good relationship and I will live up to my responsibilities as a father. Together we will take care of the little person who is about to grow. ”

These were the details of the news Tennis news: Alexander Zverev, Olya Sharypova allegations, update, answer, testimony, father,... for this day. We hope that we have succeeded by giving you the full details and information. To follow all our news, you can subscribe to the alerts system or to one of our different systems to provide you with all that is new.