Unanimous or unfair? Opinions were divided about Sam Bennett’s descent... 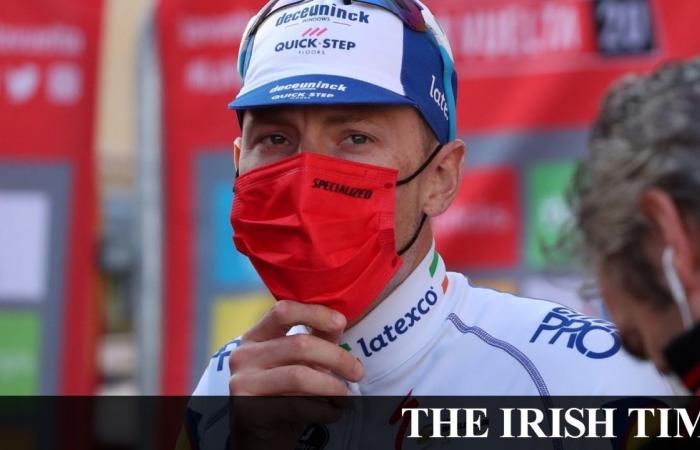 It is a rare thing for the UCI stewards to decide to find harmony between the riders and teams that it affects, and even less so for any of them to change their minds about it.

The goal of Stage 9 of the Vuelta a España on Thursday is further evidence of this – the UCI, the governing body of world cycling, said their commissioners’ decision to relegate Sam Bennett after his first win was “unanimous” while Bennett’s team manager Patrick Lefevere from Deceuninck-Quick-Step described it as “bullshit”.

Bennett himself originally described the sprint finish at Aguilar de Campoo as “somewhat sketchy”. The Irish driver took his second stage win after he was just ahead of his former team-mate from Bora-Hansgrohe Pascal Ackermann.

After reviewing the repetition of the overhead race, the UCI decided that Bennett could put his head and shoulders in contact with Latvian rider Emils Liepins from Trek-Segafredo, who was less than 1 km from the line, not just once but twice. Bennett then relegated to the rear of the main group of the stage, in this case to 110th place, coupled five points from the point classification and fined 500 Swiss francs – a little less than 500 euros.

Later on Thursday evening, the UCI made its own brief statement on the relegation: “The relegation rider of the UCI Commissaires Panel, Sam Bennett (Deceuninck-Quick-Step) shouldered another rider 500 m before the 9th stage of La Vuelta. The unanimous decision was based on television footage and was made under Article 2.12.007 of the UCI Regulations, which sanctioned “deviations from the chosen line or irregular sprint”. Both the driver and the sports director of the team were heard by the jury. “

Only Lefevere, the 65-year-old from Belgium who is currently considered the most successful general manager in cycling, still hasn’t bought him and produced a series of tweets on Thursday night after initially celebrating Bennett’s 50th career win and a 100. Grand Tour stage win for Deceuninck-Quick-Step.

“What bullshit,” he tweeted. “He (Bennett) was in the lead and the @trek driver wants to pull him out. But we have long known the incompetence of security of @Uci var (Video Assisted Referee). “

Lefevere, who himself won a stage of the Vuelta in 1978, directed his displeasure to Luca Guercilena, the Italian general manager of Trek-Segafredo: “How many sprints [HAS LIEPENS]@l_guercilena won? [WHERE]was your exit? ”

With that, Guercilena replied in a tweet of her own: “I answer just as you mention the Trek Segafredo driver. To be clear, he was put off by Ackerman first[N’S] Wheel out your ledge, then Bennett tries to put it down twice in a totally wrong and useless way. TV pictures are clear enough. No VAR is needed at all. “

Lefevere, already known for his often blunt remarks, didn’t let the matter rest, later adding, “A lead must be respected and @Sammmy_Be (Bennett) defended his line.”

The problem seemed to be twofold: Liepins was actually trying to get on the remaining Deceuninck-QuickStep train, and at the same time there was a risk of punching Bennett into the race lock on his right, just before another last gentle right turn before the last line. As it turned out, Bora-Hansgrohe mainly controlled the last pull-out train, and Liepins landed on the stage in 13th place.

The result is still a familiar scenario: On the 11th stage of the Tour de France, Commissioner Peter Sagan, also from Bora-Hansgrohe, also hit the back of the after a dangerous sprint movement during which he had to shoulder himself Banished from the field. storm in Wout van Aert from the Jumbo-Visma team.

In addition, the UCI had promised to be particularly vigilant about overly aggressive sprints after another Bennett teammate at Deceuninck-Quick Step, Dutch cyclist Fabio Jakobsen, was involved in a terrible fall at a stage of the Poland tour in August with the barriers End up at high speed and in a medically induced coma.

Bennett was also shown on race television and discussed the incident with the commissioners, but the decision was made. The second-placed Ackermann then gave his own opinion and said that the safety of the drivers should come first. The German was referring to his own relegation to the Scheldeprijs earlier this month after a bad fall in the final sprint. Bennett himself stayed out of anger on this occasion.

“I didn’t expect this because Sam was straight up front, but when I saw the video behind it it wasn’t a fair move for him,” he said. “I think after all the crashes in the last few weeks we have to take care of the others. If there isn’t a hole we have to stop. I’m sorry Sam, but they took me out in Scheldeprijs and now we have to drive fairer. “

It is easy to guess what Bennett will think about the 10th stage on Friday, the last really flat stage before the finish in Madrid on Sunday: There will be some bumpy roads near the Bay of Biscay on the 185 km from Castro Urdiales to Suances but the last 10 km are practically pancake flat.

The last time the race ended here in 2008, Deceuninck-Quick Step’s Paolo Bettini, the Italian rider and two-time world champion, won the stage, proving his last triumph as a professional rider. This time, shoulders can be included, but sparks can fly.

These were the details of the news Unanimous or unfair? Opinions were divided about Sam Bennett’s descent... for this day. We hope that we have succeeded by giving you the full details and information. To follow all our news, you can subscribe to the alerts system or to one of our different systems to provide you with all that is new.