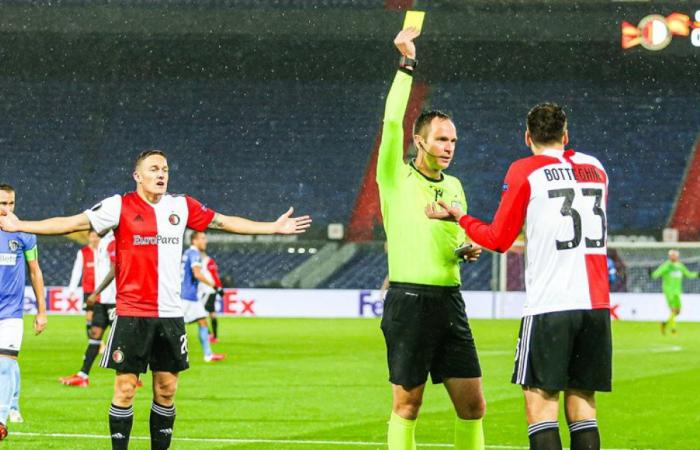 It was another exciting Europa League evening for Feyenoord, PSV and AZ. Feyenoord had to deal with a lousy referee, PSV took the full booty fifteen seconds before the final whistle and AZ played excellently in the AFAS Stadium. VoetbalPrimeur lists the conclusions.

Feyenoord
Feyenoord against Wolfsberger’s twelve men
Feyenoord’s game was absolutely not good, but it must be said: referee Srdjan Jovanovic was even more sad than the game of the team from Rotterdam. Quickly put the ball on the spot after a foul by Eric Botteghin. While there was still some respect for this decision by Jovanovic, that was not the case with two pings afterwards. They were nothing short of laughable.

Feyenoord has gained a special statistic because of the referee on duty: it was the first time that three penalties were awarded against the home team in a European match (in the main tournament). Not that they were so happy with that in Rotterdam …

Who does not finish the odds …
Gets them on the other side of the field. Against Wolfsberger it became painfully clear that Feyenoord is missing a real striker. Bryan Linssen worked his way through the eyes, but has definitely not been the happiest in the last few weeks and again missed an opportunity not to be missed. Feyenoord created a deluge of opportunities in the second half, after a very poor first act. It yielded only one goal from Steven Berghuis.

THE
AZ midfield excels
The midfielders of AZ made the difference for the Alkmaarders against HNK Rijeka. Teun Koopmeiners played as a routine of about thirty (in a positive way) against the fierce Rijeka players and used a penalty and Fredrik Midtsjö scattered great passes. Dani de Wit had an important share in AZ’s 1-0 with his depth and it was not due to his stamina: even in the final phase, De Wit kept going.

Karlsson and Gudmundsson make Boadu forget
AZ had to do without Myron Boadu, but Jesper Karlsson and Albert Gudmundsson seized their chance at the base with the Alkmaarders. The necessary threat came from both players: Gudmundsson as the starting point with two important hits, Karlsson kept his direct opponent on the wing busy and rewarded his match with a hit. Compliments to the club from Alkmaar, which again proves to have an excellent nose for talent.

Excellent Europa League start
While things are difficult in the Eredivisie for the men of trainer Arne Slot, things are still running smoothly in the Europa League. With six points from the first two games and with the tough away game against Napoli already behind us, it looks very favorable for AZ with a view to European wintering. Although, of course, you should never cheer too soon.

PSV
Wondergoal Omonia Nicosia, but was the ball still?
PSV fell behind the team from Cyprus, and how. Jordi Gomez hit a free kick from his own half, 56 meters from the PSV goal, behind keeper Yvon Mvogo. But should it have counted? The ball seemed to be rolling when Gomez kicked it, but referee Donatas Rumsas approved the goal. The VAR discussion – with the match between Feyenoord and Wolfsberger still in mind – flared up again, but there are no video referees in the group stage of the Europa League.

PSV can count its blessings
The explosion of joy after Donyell Malen’s winning goal said it all: PSV was (and is) ravaged by the corona virus, had to miss eight players from the A-selection against Omonia, but eventually managed to leave the field with three points. . The big man was Donyell Malen, who shot two behind Omonia goalkeeper Fabiano. The result on the other field was very favorable, at PAOK Saloniki against Granada, where it became 0-0. This puts PSV in second place in Group E after two games played.

The Netherlands can breathe a sigh of relief thanks to AZ and PSV: Belgium is coming into view

These were the details of the news Conclusions: Feyenoord against twelve men, excellent AZ and relieved PSV for this day. We hope that we have succeeded by giving you the full details and information. To follow all our news, you can subscribe to the alerts system or to one of our different systems to provide you with all that is new.