Ricciardo thinks Verstappen is the better driver: ‘I should say no,... 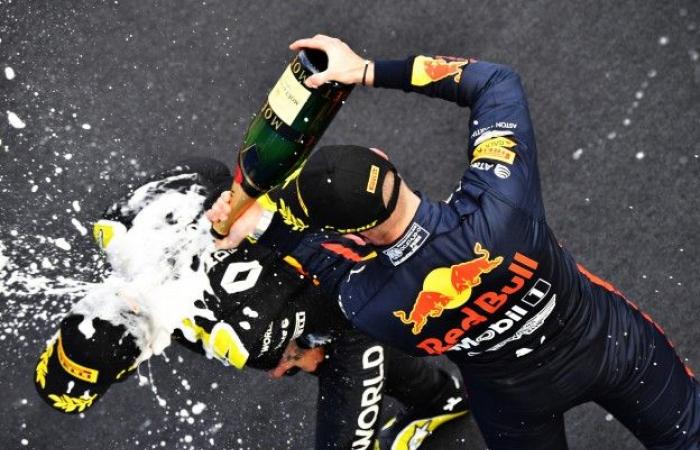 ‘He’s got it. Verstappen was born for this. Whether he drives a good or a bad car, he will make sure he finishes at the top. And he’s only getting better at the moment, ‘Ricciardo adds Men’s Health. The Australian says he has had a better relationship with Verstappen since he left the Red Bull team.

But whether the Dutch is really better than Ricciardo? Let me put it this way, I should say ‘no’, but I’ll be honest. Max is the best driver I’ve ever raced against. If you ask ten drivers if they are the best, they will all say yes, but Max is by far the best driver I have ever met. ‘

It was therefore difficult for Ricciardo to keep the good relationship that both drivers had healthy. ‘Your teammate is your only reference within the team. It is the only person with the same car as you. This driver can make your life more fun or more difficult, so it makes sense that there will be competition among themselves. Now that we are no longer in the same team, we have become more relaxed with each other. We now have more in common and I also respect him as a driver. ‘

Ricciardo has less connection with other drivers

However, Ricciardo does not necessarily have a good relationship with other drivers. He only sees a handful of drivers next to his track. ‘With a lot of drivers I wouldn’t necessarily spend time off the grid. I respect them, but they aren’t necessarily friends. I only ever see Max Verstappen and Charles Leclerc outside the circuit. But to be honest, I think most drivers are scared to befriend each other, because how will it be when we go back to racing without racing? ‘

In the meantime, the driver knows that the drivers can treat each other in a friendly manner outside the track. But on the track, the driver remains eager, despite having a good relationship with Max Verstappen, for example. ‘I now know that you no longer make a distinction when the helmet is put on.’ (Photo: Red Bull Content Pool / Getty Images)

*The article has been translated based on the content of Source link by https://www.f1maximaal.nl/max-verstappen/319006/ricciardo-vindt-verstappen-de-betere-coureur-ik-zou-nee-moeten-zeggen-maar-max-is-de-beste
. If there is any problem regarding the content, copyright, please leave a report below the article. We will try to process as quickly as possible to protect the rights of the author. Thank you very much!

These were the details of the news Ricciardo thinks Verstappen is the better driver: ‘I should say no,... for this day. We hope that we have succeeded by giving you the full details and information. To follow all our news, you can subscribe to the alerts system or to one of our different systems to provide you with all that is new.