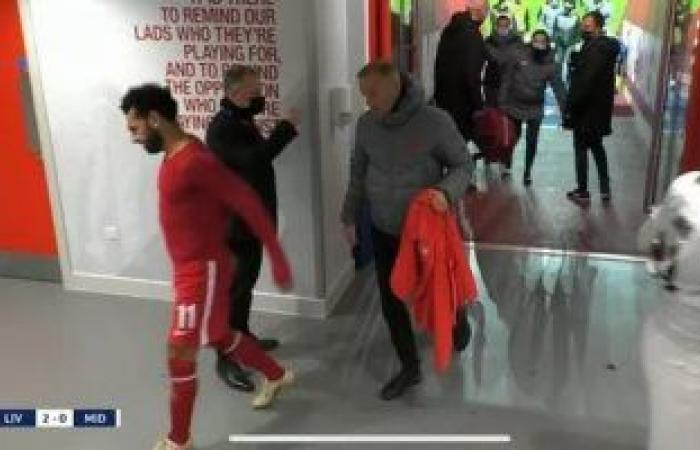 The Egyptian star Mohamed Salah, the player of the English club Liverpool, raised the concerns of the Reds fans after he was seen leaving the floor of the “Anfield” stadium after meeting the Danish Maitland, while he was limping, as the British newspaper “Daily Express” reported that Mohamed Salah appeared in the tunnel leading to the locker room He was limping, adding that it was clear to the Egyptian star that he felt pain in his right foot while leaving the field.

Mohamed Salah scored a goal in Liverpool’s victory over its guest in the Danish Maitland, with two goals free of charge, in the match that brought them together yesterday evening, Tuesday, at Anfield, the stronghold of the Reds, in the second round of the group stage of the new season of the 2020/2021 Champions League.

Mohamed Salah, the star of the national team, added the second goal of the Reds through a penalty kick in the third minute of stoppage time.

Klopp made wholesale changes in Liverpool’s main scoring, as Egyptian star Mohamed Salah was on the bench with the attacking duo Sadio Mani and Roberto Firmino, while Jota, Minamino and Origi participated from the start.

The Egyptian star, Mohamed Salah, participated with the Reds in the 60th minute of the match, as the German coach Juergen Klopp made two substitutions, involving Salah and Sadio Mani instead of Minamino and Origi.

With this result, Liverpool tops the table in Group D with 6 points, two points behind runner-up Atlanta with 4 points, after tying with Ajax III with one point, with two goals each, while Maitland trails the standings without any points balance.

Liverpool beat Ajax Amsterdam with a clean goal, scored by Nicolas Tagliavico in the 35th minute by mistake, in the match that brought them together last Wednesday, at the start of their UEFA Champions League campaign..

These were the details of the news Mohamed Salah raises fears of Liverpool fans after the match against... for this day. We hope that we have succeeded by giving you the full details and information. To follow all our news, you can subscribe to the alerts system or to one of our different systems to provide you with all that is new.