After choosing the “wrong” battle … how was Mesut Ozil “wiped... 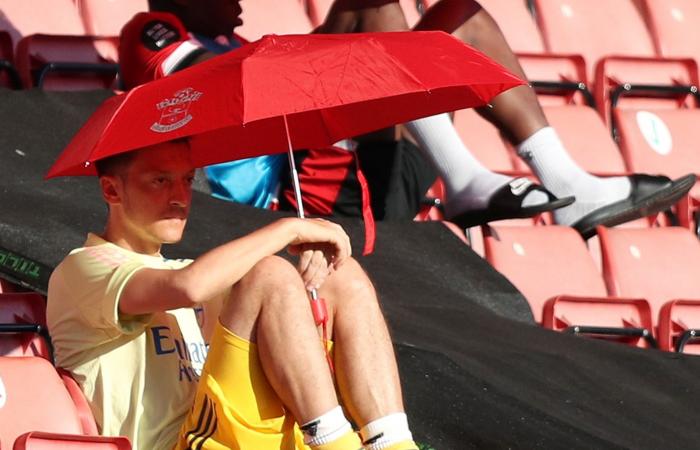 Arsenal player Mesut Ozil faces a tragic fate due to tweets he posted last December expressing his support for the Uyghurs in Xinjiang, China, and now the German player lives in “exile” after he was “wiped out” from his English club, according to New York Times report About the incident that turned the player’s life upside down.

The midfielder, who is a Muslim of Turkish origin, wrote a tweet in which he criticized China’s treatment of Muslim minorities in the region, which is located in the west of the country, and also the “lack of action” of Islamic countries to defend this Muslim minority.

Ozil wrote in Turkish: “The Koran is being burned … Mosques are closed … Islamic schools are banned … Religious scholars are killed one by one … Brothers are sent to the camps.”

“Muslims are silent. Their voice is not heard,” he added, on a picture on its background, a blue area with a crescent and star on it, which is what the Uyghurs consider a science of “East Turkmenistan.”

In his first reaction after Ozil’s tweet, the club hastened to distance itself from its player and wrote a statement saying, “Arsenal must make a clear statement because the content posted is Ozil’s personal opinion, and as a football team, Arsenal is committed not to involve itself in politics.”

The New York Times report says that a few days after the tweet, two Chinese channels broadcasting the Premier League matches in China, CCTV and PP Sports, canceled the transmission of the Arsenal match, and when Channel Two decided to transfer the team’s matches, commentators avoided mentioning the name “Ozil.”

His picture has been removed from video games in China, and by searching for his name in Internet search engines there, an “error message” appears, which means according to the report that it has been “erased” in the Chinese Internet.

The newspaper indicates that the tweet caused great problems not only in Arsenal, but also in the Premier League, because China “is the largest partner of the English League in broadcasting rights, and its largest external market, and the Premier League cannot bear the loss of this partner.”

As for Arsenal’s reaction to Ozil’s decision to speak publicly on the issue, “he was publicly distancing himself from his comments, but privately, he was punished.”

Over time, the relationship between the club and the player faltered with his club’s request for players to agree to reduce their salaries to face the repercussions of the Corona pandemic, which was opposed by the player who asked management for explanations about how the money would be saved, and whether the club’s owner would also contribute.

The player refused to reduce his salary and “he knew the danger that threatens him, which is the club’s abandonment of him, and the end of his football career in him,” which is what actually happened as the club stopped using his services in the stadiums.

Another crisis that caused “tension” between the player and the club was his entry into the case line of the famous Arsenal mascot “Green Dinosaur”, who announced that he would sponsor him with his salary after news of stopping its use in the club.

Although the English Premier League, according to the report, expresses its opinion on political issues, the latest of which is its support for the “black lives matter” demonstrations, it seems that Ozil’s mistake “is not making a political statement as much as” choosing the wrong issue. ”

The newspaper says that the club considers that “the problem caused by Ozil exceeds his talent,” so he decided to get rid of him, and offered to pay the remainder of his contract, but the latter refuses to leave.

“For months, the playmaker who won the World Cup with Germany was available for sale at a huge discount, yet no one, in Europe, was willing to buy it.”

With the transfer window closed until next January, the player finds himself “in exile … he doesn’t seem to have a way out.”

The report notes that the player’s “beginning of the end” came with a tweet that, 10 months later, led him to the situation he is today, which he “effectively erased”.

It is worth noting that Arsenal’s coach, Mikel Arteta, recently announced that he had taken the decision to exclude Ozil from his team, whether in the “Premier League” or the rest of the European championships, due to “technical reasons” and the fluctuation of the player’s level.

But the player believes that the real reason is the China issue, indicating that the English club has major commercial interests there and does not want to lose them.

China is the largest market for the broadcast rights for the Premier League matches, with Premier League clubs getting more than $ 564 million from the rights to broadcast their matches there.

China is facing increasing global criticism against the background of the vast network of camps in Xinjiang, which asserts that they are intended for “training” the population, while its critics and government organizations see that it is intended for detention.

Former detainees described the facilities as indoctrination camps as part of a campaign to eradicate Uighur culture and religion.

Washington, human rights organizations and experts accuse Beijing of detaining up to one million Muslims, especially Uyghurs, in camps in the region.

These were the details of the news After choosing the “wrong” battle … how was Mesut Ozil “wiped... for this day. We hope that we have succeeded by giving you the full details and information. To follow all our news, you can subscribe to the alerts system or to one of our different systems to provide you with all that is new.