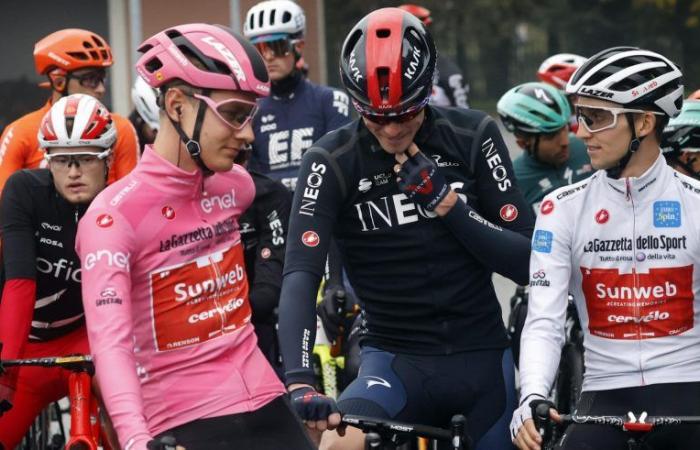 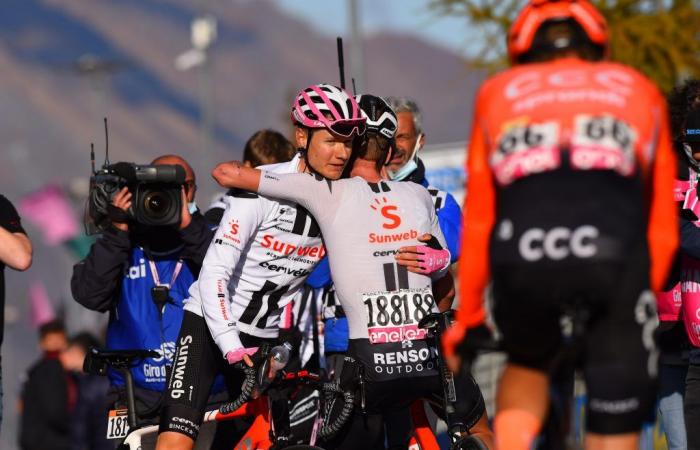 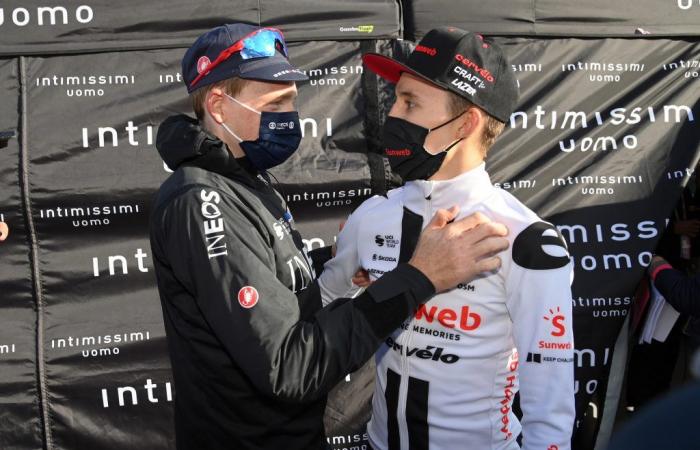 Ask Rohan Dennis about his 2011 season and the Australian will immediately show you his ugliest face. It is a cycling year that he never really wants to be reminded of. At the Rabobank promises, the Adelaide racing driver feels humiliated and disadvantaged for a year.

The team management of the young banking formation is full of praise for Wilco Kelderman and Jetse Bol. Even a talent like Tom Dumoulin does not fall into favor. The only ‘Aussie’, the only foreigner even, in the young banking team is the proverbial pimp of the formation and is told time and again that he cannot do anything at all towards these two Dutchmen.

The fact that these minorities have bothered Dennis for years is evident during the World Championships cycling in Richmond in 2015. That summer he won two time trials in the Tour de France and in the capital of Virginia he conquers the world title team time trial with BMC for the second consecutive year. .

Lamentation
Two days after that global gold, he hears someone speak Dutch in the hotel restaurant. Dennis introduces himself nicely and gets into conversation with the ‘Dutchman’ about the training team of Rabobank. The Dutchman appears to be an ex-national coach who can agree with the lamentation of how the Rabobank promises were guided.

The Australian does not say a bad word about his teammates at the time. He does show his displeasure for minutes about how he was treated by the team management in 2011 and was negatively disposed towards the Dutch riders. At the end of the conversation, he asks for the email address of his then Rabo sports director Piet Kuijs.

“I want to ask him if he followed the 2011 crop a little bit,” says Dennis. ‘Or do they know which of that team has achieved the best results among the pros? Whether that Aussie really can’t do anything? ‘

The incident in Richmond shows how Dennis must have felt hurt in 2011. How great his sporting feelings of revenge towards men like Kelderman and Bol must be, because in his first year in Europe he was never honestly approached towards these two Dutchmen. .

Elephant memory
Cyclists have an elephant memory so it should come as no surprise that the year 2011 haunted Dennis’ head in the last mountain stages of this Giro d’Italia. That he may have found extra strength on the Stelvio and on and around Sestrieres by thinking back to all the humiliations in the Rabo shirt. Dennis is such an eccentric.

On the eve of the final time trial in Milan, it is clear that Wilco Kelderman will make this 103e edition of the Giro d’Italia has lost by Rohan Dennis. The Australian has made the difference on the Gelderlander in the ride over the Passo dello Stelvio and in the ‘mountain criterion’ in and around Sestrieres. With a killer pace uphill in the service of his INEOS – Grenadiers leader Tao Geoghegan Hart, the two-time world time trial champion ensures that Kelderman is released on the two most crucial days of this round.

Uphill, Kelderman can keep his loss reasonably limited on both Thursday and Saturday. He has to release twice on the penultimate col, after which he has to climb many kilometers on his own. Just after the descent of both penultimate mountains in the valleys towards the final col, ‘moped’ Dennis turns out to be able to shift up a gear twice. Born Barnevelder then loses a minute twice on the flat roads. The decisive difference that he ultimately falls short to win this Giro d’Italia. 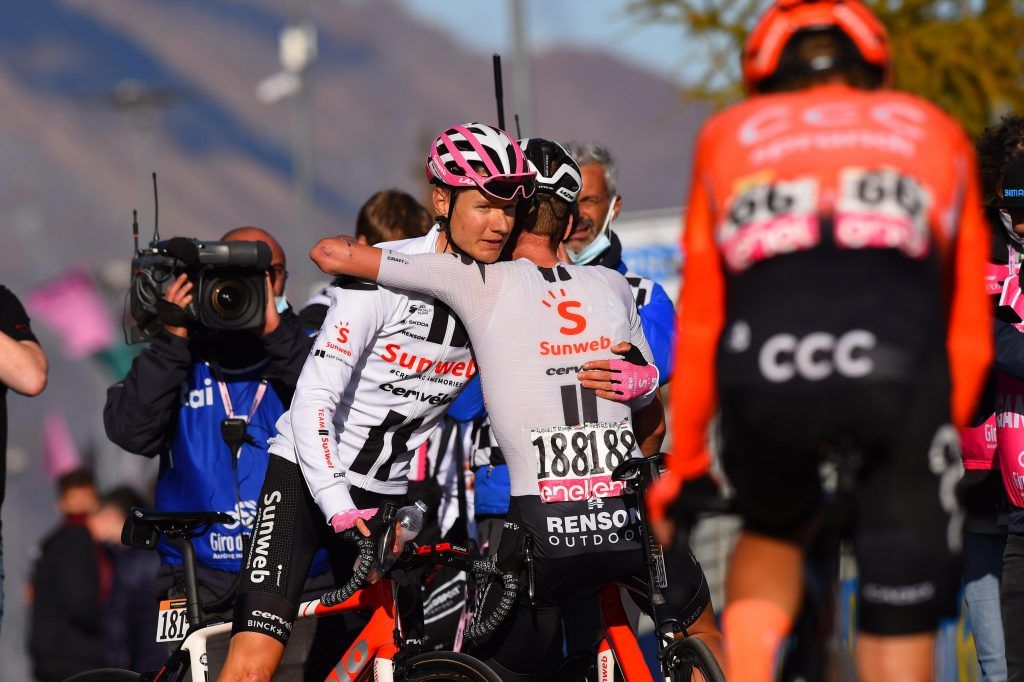 Question marks
Dennis’ performances deserve all the praise. Although there may also be some question marks behind the tactics of Team Sunweb. It is clear that their course method on their way to Laghi di Cancano last Thursday does not seem to lead to the overall victory in this Giro d’Italia.

Jay Hindley may have the pink sweater around his shoulders, but is at the same time as Tao Geoghegan Hart. The Briton, on the other hand, is the much better time trialist and only bad luck seems to be able to break him up in the 15.7 kilometer long individual test to the Milan Cathedral. Team Sunweb has only a minimal chance to conquer the ‘Trofeo Senza Fine’ for the second time in four years.

What can Iwan Spekenbrink’s team charge itself for having missed this unique opportunity to win the Giro again? Kelderman had a 2’41 and 2’42 lead for the Stelvio stage on Hindley and Geoghegan Hart respectively. In the Stelvio stage he loses 2’18 and on Sestriere 1’35. Add some bonus seconds to that, which means that he has an apparently unbridgeable gap of 1’32 on both ‘youngsters’ for the final time trial.

In my eyes, the Sunweb team management on top of the Passo dello Stelvio, where Kelderman had lost 44 seconds after he had been released five kilometers earlier, should have played the Dutchman’s card. It was clear at that time that he was only slightly less uphill, but at 2746 meters highest pass in Italy, the conclusion could also be drawn that he would not completely crack in this Giro.

Team leader car
Kelderman gets a serious mental blow when he is passed by his team leader’s car in the last part of the descent, just before the eight kilometers flat valley. At that moment, the virtual leader of the lap has to rely on the help of the neutral material car for a number of kilometers before the second car of Team Sunweb joins the front. In cycling it is unprecedented that the leader is left alone.

It can be defended that Team Sunweb wants to keep both Hindley and Kelderman in a promising position in the standings that day. However, the highest goal, the overall victory, must always come first. 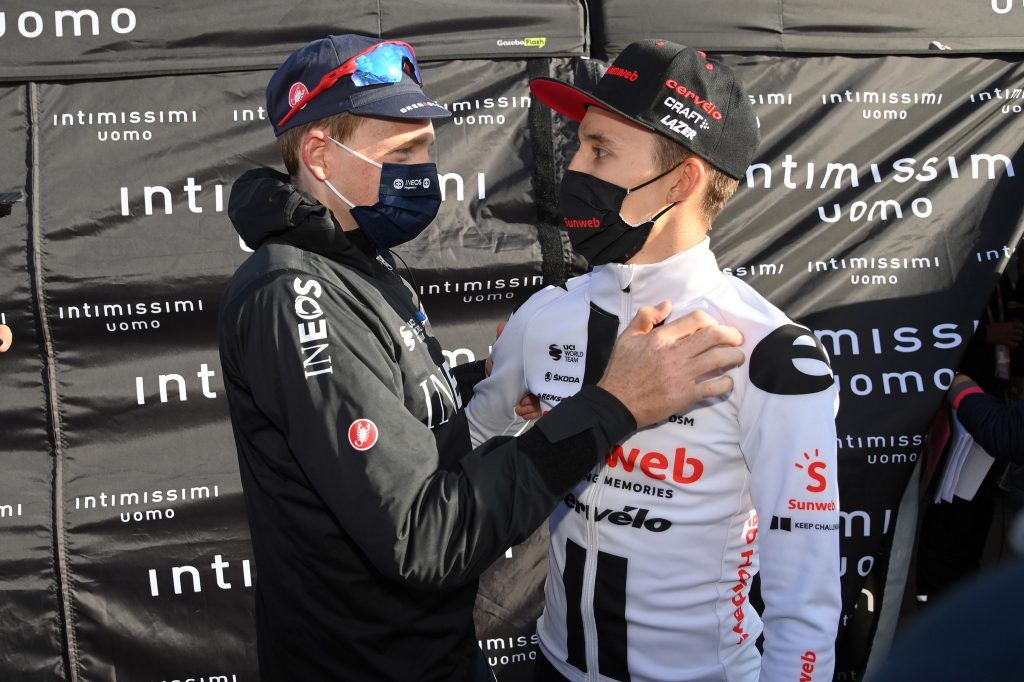 Now the team management orders Hindley to stay on the wheel of Geoghegan Hart on the final climb of Torri di Fraele. The fear prevails that Kelderman would lose even more time on the INEOS Brit in an attack by his Australian teammate. So here the technical staff is too much in two minds, which is always dangerous.

On Thursday, the young Australian was visibly stronger than Geoghegan Hart on the final climb and the team should have benefited from that. Where possible, Hindley should always have saved time on the Brit. After all, the Brit is the much better time trialist of the pair. That is why it cannot be reconciled that the team management gives Hindley the order on Thursday on the final climb to race defensively. This is probably the moment where Team Sunweb loses this Giro d’Italia.

Slottijdrit
The final time trial has yet to be driven, but the chance that the 25-year-old Tao Geoghegan Hart will achieve the overall victory in this Giro d’Italia against the clock is high. Team Sunweb can proudly watch two of their riders on the podium at the Duomo in Milan, but the pain of missing the overall victory will dominate.

Precisely in the 2020 Corona season with a field of participants that is not as strong as in other years, with dropouts of level such as Geraint Thomas, Miguel-Angel Lopez, Simon Yates and Steven Kruijswijk, among others, it was a unique opportunity for Kelderman and Hindley to win this Giro d’Italia.

A main prize with which you immortalize yourself as a cyclist. When the expected podium is celebrated tomorrow with Geoghegan Hart in pink and Hindley and Kelderman in positions two and three, the feeling will gnaw that this ‘maglia rosa’ could have gone to Deventer again.

Rohan Dennis will then be pleased to see his INEOS teammate Geoghegan Hart receive his first pink jersey of his life on Sunday afternoon, October 25, 2020 and win the Giro d’Italia in 2018 as the second Briton after Chris Froome. Maybe the Australian will then send an email to Piet Kuijs …

These were the details of the news Opinion | Rohan Dennis settles with Wilco Kelderman for this day. We hope that we have succeeded by giving you the full details and information. To follow all our news, you can subscribe to the alerts system or to one of our different systems to provide you with all that is new.