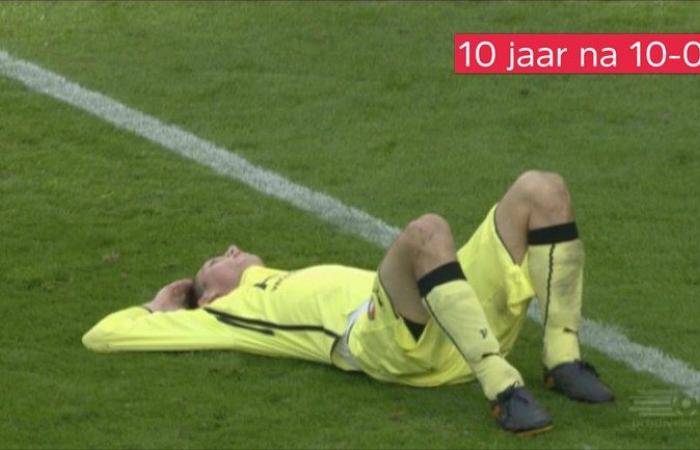 October 24, 2010 will arouse warm feelings in few Feyenoorders. It is the Sunday of the 10-0 defeat in Eindhoven against PSV. It is still the biggest defeat in the club history of the Rotterdammers. A defeat that still hurts South ten years later, becomes clear when we talk to a number of protagonists from that time.

Ruben Schaken, who had already been replaced after more than half an hour due to the red card for Kelvin Leerdam, also prefers not to go back to that one day in Eindhoven. “I just put that defeat away, you are actually bringing it back up again and I am not so happy about that”, he says with a laugh. It sounds like a farmer’s smile with a toothache.

Tim de Cler does want to talk about it. He completed the ninety minutes in Eindhoven as a left back, and saw PSV attacker Jeremain Lens slip into the 10-0 in front of him. “I never actually think about it,” De Cler says about ten years ago. “Everything that could go wrong went wrong. I can say a hundred more things about it, but I think I still have the same opinion as then immediately after the game.”

“Unbelievable how this could happen. All chances really went in then. Everything went against ten men. Everything went wrong. Loose sand. I can unleash a lot of analyzes, but one goal after another fell and there was Unbelievable, but true. You don’t really want to be reminded of it. For a club like Feyenoord it is of course very special, in a negative sense. ”

For Orlando Engelaar from Rotterdam, talking about exactly ten years ago is a lot easier. He went through the entire youth academy of Feyenoord, but wore the PSV captaincy on 24 October 2010.

Engelaar: “A bell will not ring immediately. It’s that you say it now, otherwise I would not even have known what day it was. You win 10-0. That’s good, but if we had 5-0 It would have been a fantastic day and we would have received just as many points. Of course it was special, but I don’t think you should make it bigger than that. “

Almost all my friends and family are diehard Feyenoorders, I think they haven’t spoken to me for a few weeks

“It is of course true that I have a history at Feyenoord, but by then it had been so long ago that you are not really working on it anymore”, Engelaar continues. “But after the game you will hear … almost all my friends and family are diehard Feyenoorders, I think they haven’t spoken to me for a few weeks.”

Engelaar still remembers the very young team of Feyenoord at the time. With very young talents such as Georginio Wijnaldum, Luc Castaignos, Stefan de Vrij and Bruno Martins Indi at the time, the average of all Feyenoord players who play during the match against PSV does not exceed 23.5 years.

“I think that Feyenoord was in a difficult phase, with a very young talented team”, says Engelaar. “Not yet ready for the real men’s football, it turned out. I thought it was sad, little guys from 18-19 years walked across the field with tears in their eyes. Ultimately, you play football to win, I am really very happy with that victory, but football is also sportsmanship. If you enjoy guys aged 18-19 with tears in their eyes, I don’t think you are quite well. I thought that was sad for Feyenoord and for the supporters. I grew up there so I know how it lives with those people. ”

Compassion. That is exactly what hurts so much for Feyenoord supporter Eric van Dorp. At the time, he was the chairman of the Feyenoord Supporters Association and was invited by PSV to attend the Philips Stadium on October 24, 2010. “I was sitting among the PSV supporters, in a place where everyone knew: that’s where the guests from Feyenoord come. Then you are not really comfortable with that defeat.”

“We just went to the PSV supporters home afterwards”, Van Dorp continues. “Then came the worst comment you can get. Not everyone will laugh, but they thought it was pathetic. If I hate one thing, it is that people will find it pathetic. That was the worst of that afternoon. : that they felt sorry for your cluppie. ”

Van Dorp still remembers PSV-Feyenoord well, from the stands in the Philips Stadium. “It was a very naive game. You are already 4-0 behind with a man less, but then you run forward to make it 4-4. I think only Sparta can do that, but not us. If you had said that. : this is it, we stick to 4-0, then nobody would have mentioned that game anymore. “

“But they kept running forward like a bunch of chickens without heads. Then at a certain point you become very small when everyone starts shouting ‘ten, ten, ten’. But I have one principle: I always stay put.”

De Cler, at the time of 31 years one of the few players with experience at Feyenoord, recognizes the words of Van Dorp. “It was no longer coachable, from the side and in the field. We were a very young group and not as a team. One wanted to go forward to score a goal, the other wanted to defend, everything was open.”

“Normally if you are 4-0 or 5-0 behind PSV you have to stand in your own sixteen and be ready. But with us a number of players wanted to go for a goal. I believe that we have three more or four counters to the ears, that is quite bizarre if you are already 4-0 behind at PSV. That has to do with experience. That was something we did not have, that is why it went so wrong. ”

Jan Dirk Stouten reported on Feyenoord matches for years on behalf of Rijnmond, and was also present in the Philips Stadium on 24 October. “It was not surprising in that year that you sometimes lost”, Stouten begins. “At half time it was only 2-0, but in the second half all those young boys were still chasing a goal. Even at 8-0 they kept walking forward like a chicken without a head. After a defeat there is always hanging around. a nasty atmosphere in the dressing room, with especially silence. But this was the superlative of it. Very special, a very crazy afternoon. “

Did Stouten feel that afternoon that it could have been Mario Been’s last game as a trainer of Feyenoord? “Yes, for sure. We (Rijnmond, ed.) Were never the very first to speak to him, but in my experience he was the most open of all media. I think he told me for the first time that he had questioned his position in the locker room. Then there were about fifty journalists panting in my neck. Mario still has a hard time with it, it’s a scar that never healed. He is very sorry that he was trainer. “

But Been, overloaded with support from Het Legioen, remained the trainer of Feyenoord. Three days later, the team from Rotterdam played against VVV on Wednesday evening in a sold-out Kuip. “There are a lot of people who quietly went to work through the side entrance on Monday morning”, says Van Dorp. “I was one of them. But the reaction three days later says a lot more about the club. It just happens, it is in the people themselves. It’s as Gerard Cox once described: you are not a Feyenoord supporter for fun. “

Stouten adds: “That match against VVV was very special. It was really bizarre that De Kuip was full again. That’s the special thing about that club. VVV could never have won that Wednesday evening, excluded.”

Feyenoord eventually won 3-0 against the team from Venlo, by two goals from Wijnaldum and one from André Bahia. Just like against PSV, De Cler was on the field for ninety minutes. “Fortunately we won convincingly against VVV. It also says something that the Kuip was full at the time. Yes, that made more impression than the 10-0 defeat. That you could count on so much support a few days later. But then you have to do it. still do it yourself, because if you don’t win it all hell would have broken loose. “

Later that season, PSV also went to De Kuip. “100 percent through feelings of revenge, that defeat cost PSV the championship in retrospect,” says Stouten. In the end, partly due to the 3-1 defeat in the Kuip, the Eindhoven team had to leave the title to Ajax.

The contrast in both confrontations between Feyenoord and PSV in the 2010-2011 season is perhaps best depicted in Orlando Engelaar. In Eindhoven still heading in the 8-0, in De Kuip shortly after the break with red. “In the end, everyone at PSV had the feeling at the time: it was just a match”, Engelaar concludes about the monster score in Eindhoven. “We should have become champions that season. Everyone would have exchanged that 10-0 for a 3-0 win or maybe even a loss that day, if we had become champions at the end of the year. That is a lot more important. A title stays with me much more than a 10-0. “

Feyenoord ended in tenth place in the 2010-2011 season. Trainer Mario Been will leave Feyenoord in July 2011, in the run-up to the new season. Thirteen of the eighteen players say in a mood that they have confidence in the trainer. Ronald Koeman succeeds Been.

The last word in perspective in this story is for supporter Van Dorp. “Ultimately, defeats against Ajax hit me harder than against PSV. Very simple: I would rather lose 10-0 to PSV than 2-0 to Ajax. I am really sick of that. If that match had been in Amsterdam, everyone would have had two months. I think stayed inside. “

These were the details of the news Ten years after PSV-Feyenoord (10-0): ‘Pity for your cluppie, that was... for this day. We hope that we have succeeded by giving you the full details and information. To follow all our news, you can subscribe to the alerts system or to one of our different systems to provide you with all that is new.