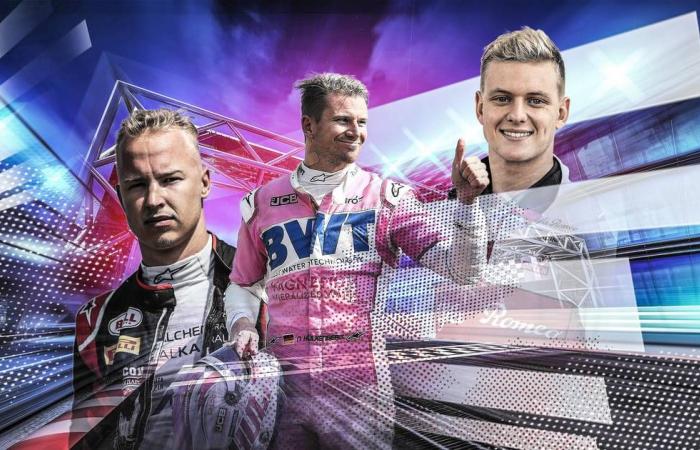 Formula 1 is making a stop in Portugal this weekend for the twelve races of the season. (Formula 1: Grand Prix of Portugal on Sunday from 2.10 p.m. in LIVETICKER)

But while Lewis Hamilton’s seventh world title after the failure of Valtteri Bottas at the Eifel GP can hardly be taken, there is still plenty of tension in the driver carousel.

Because even if numerous cockpits have already been allocated, some are still hotly contested. Two Germans play a major role in the battle for the last places.

SPORT1 gives an overview of the candidates for the cockpits that have not yet been confirmed.

The situation of the firefighter of 2020 in Formula 1 is curious. Hülkenberg jumped in at three races for Racing Point this season and showed some brilliant performances. After that, the German received praise from numerous drivers and team bosses.

Just about every F1 boss – who hadn’t yet occupied his seats – said that Hulkenberg was a candidate. Even Mercedes team boss Toto Wolff described him as a “good candidate”, but probably only as a substitute driver. However, Hulkenberg does not want that, as he did in an interview AvD Motorsport Magazin on SPORT1 confirmed.

Everything about Formula 1 and the motorsport weekend in AvD Motorsport Magazin with Bernd Schneider and Hermann Tilke on Sunday from 9.45pm on TV on SPORT1 and in LIVESTREAM

That leaves Haas, Alfa Romeo and Red Bull for Hülkenberg. After he himself described Haas as an “unrealistic” option, Alfa Romeo was considered a hot candidate. But according to information from SPORT1 and the Gazzetta dello Sport now on their regular drivers Antonio Giovinazzi and Kimi Räikkönen.

Red Bull would be Hulkenberg’s preferred option. The Austrians are also interested in him, as is Red Bull motorsport consultant Helmut Marko SPORT1 confirmed – but the current Red Bull driver Alex Albon has it in his own hands. If he stays with team-mate Max Verstappen for about three-tenths, he has his cockpit safe. If not, Hulkenberg’s hour could strike.

Should Alfa Romeo continue to rely on its two regular drivers, that would also be bad news for the young Schumacher. But the son of the record world champion doesn’t have to worry too much.

The 21-year-old will probably just be put in another Ferrari customer team. Haas team boss Günther Steiner already had the AvD Motorsport Magazine on SPORT1 confirms that he wants Mick Schumacher for one of his cockpits – that could actually happen now.

How SPORT1 reported on Wednesday, Schumacher is a hot candidate for a cockpit at Haas. A decision has not yet been made, however. The only thing that is certain so far is that Romain Grosjean and Kevin Magnussen will lose their cockpits, which is why both places at Haas are up for grabs.

A place at Haas very likely belongs to the Russian Nikita Mazepin. Steiner wanted that SPORT1 did not directly confirm: “Mr. Mazepin wants his son in Formula 1 – and his son probably wants that even more. But we must first decide which direction we are going.”

After the confirmed departures of the two previous regular pilots, it would be a surprise if Mazepin did not receive a Haas cockpit. His father Dmitri will take care of that with a generous dowry from his Uralkali group. Steiner rejected rumors that he wanted to buy the whole Haas team straight away.

Mazepin is currently only sixth in the Formula 2 classification – more than 50 points behind leader Mick Schumacher. Mazepin is very controversial among motorsport fans, as in previous races the hot-headed driver had blown the fuse and he even beat up a fellow driver.

His victim at the time was the Briton Ilott, who could now fail in the cockpit search for 2021 due to the millions of Mazepin senior, although he is well ahead of him in the drivers’ standings. A change to Formula E would then be conceivable for Ilott.

Robert Shwartzman, who is tied on points with compatriot Mazepin, will probably have to complete another year in Formula 2 before he can move up to the premier class.

AlphaTauri has not yet confirmed a driver for 2021. The announcement of the extension with Monza winner Pierre Gasly is only a matter of time. For Daniil Kvyat, however, it should be tight.

The Japanese Yuki Tsunoda is considered a likely candidate, which Marko also with SPORT1 confirmed: “Tsunoda is still about the super license. He is currently in third place in the F2 championship. A fifth place would also be enough, but there are still four races. We’ll wait and then we’ll make the final decisions to meet.”

A decision should be made before the Formula 1 race in Istanbul, which takes place in mid-November.

After Pérez had to make way for Sebastian Vettel at Racing Point, which will be called Aston Martin from 2021, the Mexican is currently looking for a cockpit. At Haas he is considered an outsider candidate, as the team is likely to rely on two young drivers.

Another possibility should be the Williams team, which could use the incoming sponsor millions with a commitment from the 30-year-old. Rumor has it that Mercedes junior George Russell wobbles despite good performances.

But Russell’s three-year contract runs until the end of 2021 and he was confirmed as a driver for 2021 a long time ago exactly like team-mate Nicholas Latifi. A door to Red Bull may also open for Pérez if Albon weakens in the coming races.

The six-time world champion could of course throw it all over again if he decides against an extension at Mercedes. However, this cannot currently be assumed.

“When the time comes, we’ll sit down and discuss the matter,” said Hamilton on the sidelines of the race weekend in Portimao. Together with Mercedes, he has “achieved a lot over the years, and we are still a long way from being done.”

The fact that Hamilton’s contract, as well as that of Mercedes Motorsport Director Toto Wolff, expires in 2020, feeds speculation that he will only want to continue to bind to Mercedes once the future of his close confidante Wolff has been clarified.

The confirmed field of drivers for the Formula 1 season 2021:

These were the details of the news F1 driver carousel 2021 with Mick Schumacher, Hulkenberg, Hamilton for this day. We hope that we have succeeded by giving you the full details and information. To follow all our news, you can subscribe to the alerts system or to one of our different systems to provide you with all that is new.