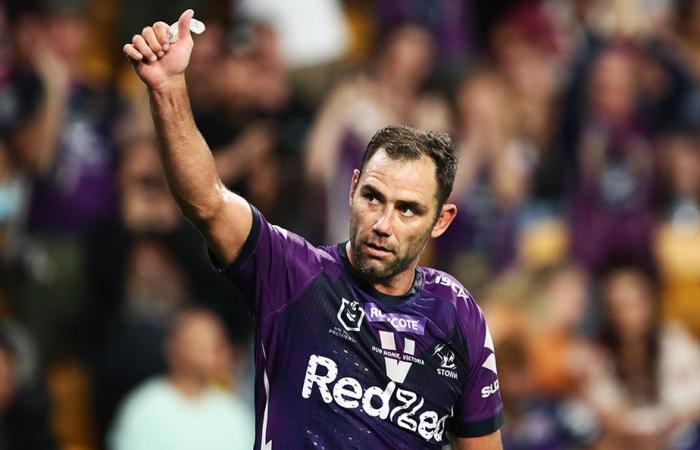 It was an ironic answer to a question during a light-hearted interview – but the fact that the words came out of Cameron Smith’s mouth will do little to quell speculation about his future.

During a guest appearance on the Matty Johns Family Podcast this week, the Melbourne Storm Skipper was asked if he was most likely playing for the Brisbane Broncos or Gold Coast Titans in an alternate universe.

“What’s this alternate universe called, 2021?” Smith said with a laugh.

To which host did Matthew Johns reply: “Yes, it is.”

Smith has yet to officially announce whether Sunday’s NRL final against Penrith will be the last game of his legendary career.

The 37-year-old recently bought a house on the Gold Coast and has been linked to a move to the Broncos and Titans in recent months should he decide to play next season.

Most experts predict that Smith will retire.

There is some speculation, however, that his ties to former Queensland coach and senior Gold Coast official Mal Meninga could lead him to the Titans.

At a press conference on Wednesday, Smith confirmed that he would make a call about his future playing “some time after the grand finale”.

Grant caused a stir last month when he told the crowd at an official Wests Tigers event that he wouldn’t be returning to the storm next season if Smith kept playing.

Several reports have also suggested that Brandon Smith will request a release when Cameron signs up for a 20th campaign with the storm.

Smith added, when asked what factors will or will influence his decision, “I think it depends more on whether I feel like I don’t want to do it anymore.

“… For me it’s about weighing that up (commitment that you need to play in the NRL).

“There is no secret that I am getting a bit into now, I’m 37 and that means my family is growing too and my children are starting to get a little older.

“My oldest daughter, she is 12 and will be 13 next year and you are starting to do many things in your own life.

“So it has more to do with whether or not I commit myself to making these sacrifices more.

“It’s not really about how good I feel playing or whether I can still make a difference on this footballing side.

“I think it’s more about whether I want to make that commitment more.

Smith also announced that the outcome of Sunday’s NRL decision will not affect his final call.

“And a lot of people have mentioned if we get a good result on Sunday, but I can confirm that on your show today it makes no difference whether we win or lose,” he said.

“I definitely want to get out of there and we want to win, there is no doubt about that, but that doesn’t decide whether I’ll play next year or not.”

These were the details of the news NRL Grand Final: Cameron Smith says he would sign with Titans,... for this day. We hope that we have succeeded by giving you the full details and information. To follow all our news, you can subscribe to the alerts system or to one of our different systems to provide you with all that is new.