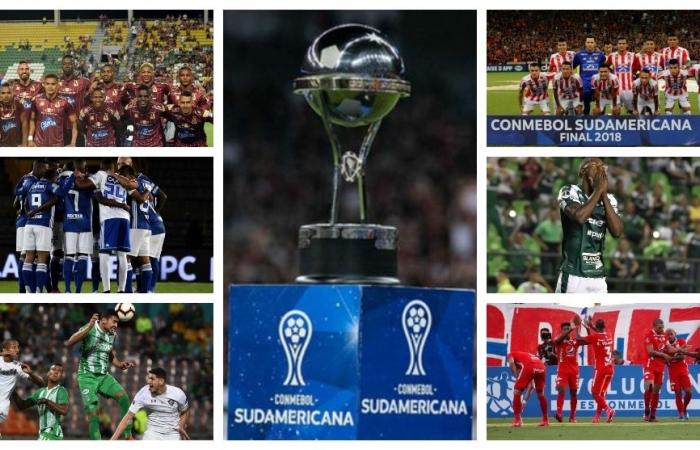 TFollowing the new failure of the FPC in the Copa Libertadores de América, the clubs of our country will face in the second most important club tournament of the continent the objective that remains for them at the international level in 2020. The draw announced the rivals of Tolima , Millonarios, Deportivo Cali, Junior and Atlético Nacional de Medellín in the face of the return of a contest that can cut the ordeal of ours at an international level in recent years.

Colombia will have five teams in the second phase of the Copa Sudamericana and four of these within the so-called greats of the country. Only Argentina surpasses us in number of representatives, although no other federation has such important clubs in terms of name and history as those that the FPC will have in the draw for the second phase of ‘The other half of glory’.

Do we have an obligation to win the South American? There are two questions to analyze to answer this question. The first one goes through the history of our country in the tournament, where only Independiente Santa Fe could lift the title in 2015 against Huracán in Bogotá. Junior fell with Paranaense a couple of years ago in the definition, while Atlético Nacional was a victim of San Lorenzo in 2002, of River in 2014 and officially requested the consecration of Chapecoense after the tragic accident of the Brazilians in 2016.

There were other good performances, it is true, although reality shows that Colombia also has a hard time in the tournament that it will have in 2020, its latest version with hand-to-hand definitions from the beginning of the contest. Millonarios achieved two semifinals (2007-2012), Junior and National one each (2017-2003), while Santa Fe also was among the first four in the edition where the ‘sharks’ would fall in Brazil. In summary, history does not put us as a country that wins or does not even reach so many finals of the South American, although this factor changes when we see the rivals that could complicate Colombia’s life this year.

That it costs our league a lot in the international arena in recent years is true. That we do not have the money from ‘gauchos’ or ‘cariocas’ to build large schools is also true. Despite all the above, this edition puts us on paper with several teams that could at least go quite far.

Argentina has its biggest threats in Vélez de Mauricio Pellegrino and Defesa de Hernán Crespo. He is also Independent, the highest winner in the history of the Libertadores but which in turn drags a football and financial crisis typical of our country. As for Brazil, Sao Paulo was seen as a team full of good attackers but with a weak defense. If we talk about the most demanding rival that we can find in the giant of the continent, Germán Cano and his Vasco Da Gama are the rival to avoid.

Then there is Peñarol, who since 2011 has not advanced from the group stage of the Libertadores, Bolívar and the height of La Paz and Huachipato in Chile as the most “dangerous”. As can be seen, it is probably not only the edition where we have the largest number of clubs in our country in the South American, but the edition with more accessible rivals and where the third parties of the Libertadores group stage are far from the level of those who arrived in the last years.

In conclusion, the decline of Colombia in CONMEBOL tournaments at the football level is evident, although for the first time in some years, we could have the most Colombian South American Cup that can be seen. It will depend on the draw that each one got, it is true, but above all on the level of teams that they could find in this edition of the second most important club tournament on the continent, their first international conquest.

*The article has been translated based on the content of Source link by https://co.marca.com/claro/futbol/copa-sudamericana/2020/10/23/5f91ecfeca4741a6518b4600.html
. If there is any problem regarding the content, copyright, please leave a report below the article. We will try to process as quickly as possible to protect the rights of the author. Thank you very much!

These were the details of the news Copa Sudamericana 2020: Is the Copa Sudamericana an obligation for Colombia? for this day. We hope that we have succeeded by giving you the full details and information. To follow all our news, you can subscribe to the alerts system or to one of our different systems to provide you with all that is new.