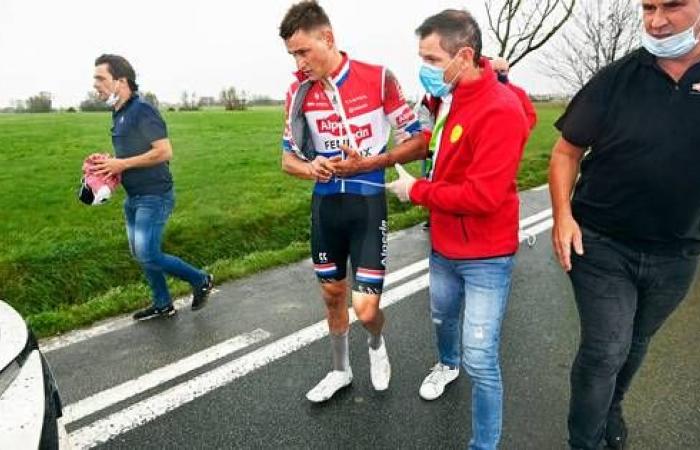 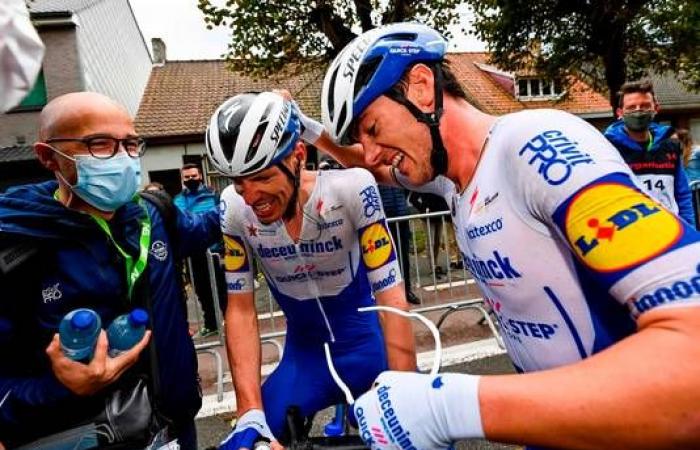 VideoAlpecin sports director and team boss Christoph Roodhooft suspects that Mathieu van der Poel suffered a concussion this afternoon in a fall in Three Days Bruges-De Panne. “In any case, it is close to it”, said the Belgian after delivering the team’s leader to the team bus in De Panne.

At less than 20 kilometers from the finish, Roodhooft was the first to reach Van der Poel after he ended up in a deep, but dry ditch. “You don’t know where you are going,” said the team boss with a scared heart. “He complained of a sore neck and nausea. He probably landed on his head. I think it would be best for him to visit the hospital first. ”

Van der Poel drove next to Roodhooft in the team leader’s car to finish place De Panne. “He didn’t say much along the way. Except that he felt nauseous. ” De Roodhooft saw the fall itself from the car. “On the last bit where there was a fierce side wind.” Van der Poel drove on the left side of the road in the leading group of thirteen men who were on their way to distribute the prizes. At the moment that Deceuninck’s men opened the attack, Van der Poel wanted to move forward. Just then the strong wind chased the group to the left. Van der Poel got stuck and ducked into the ditch via the verge.

“It is the relativity of the race”, Roodhooft sighed. “So you are busy trying to win the race and suddenly something like this happens.” The Alpecin-Fenix ​​team boss hopes that the damage to his leader will be limited to a few days of rest. “This was the last race on the road. Tomorrow his vacation starts. For the time being that will be nothing more than sitting comfortably on the couch at home. ”

In the end Yves Lampaert won from Deceuninck-QuickStep Three-day Bruges-De Panne. At just over 7 kilometers from the finish, he attacked from a leading group of eight and was then no longer caught up. Due to strong winds, the local loop around De Panne was shortened. As a result, the course was 13 kilometers shorter. Lampaerts country and team mate Tim Declercq finished second. Tim Merlier, Van der Poel’s Belgian teammate, third.

For the 29-year-old Lampaert it was his eleventh victory as a professional. “It is a relief that you can just win a race. A very nice one too, mentally very tough. You had to pay attention every second ”, said the winner at Sporza.

The wind had destroyed the peloton early on, with a group of over twenty riders in front, including Van der Poel. Jumbo-Visma, with Mike Teunissen, among others, had missed the shot. After the fall of Van der Poel, eight men remained from which Lampaert completed his decisive attack. “I drove away from the front. I regretted that after a minute because my legs almost exploded ”, said the Belgian, who has stage victories in the Vuelta and the Tour of Switzerland to his name. “We played it fantastic with the team, we had the race completely under control.”

*The article has been translated based on the content of Source link by https://www.ad.nl/wielrennen/van-der-poel-is-misselijk-en-heeft-zere-nek-na-val-in-greppel-tijdens-driedaagse-brugge-de-panne~a47176af/?referrer=http%3A%2F%2Fwww.bing.com%2F
. If there is any problem regarding the content, copyright, please leave a report below the article. We will try to process as quickly as possible to protect the rights of the author. Thank you very much!

These were the details of the news Van der Poel ‘is nauseous and has a sore neck’ after... for this day. We hope that we have succeeded by giving you the full details and information. To follow all our news, you can subscribe to the alerts system or to one of our different systems to provide you with all that is new.