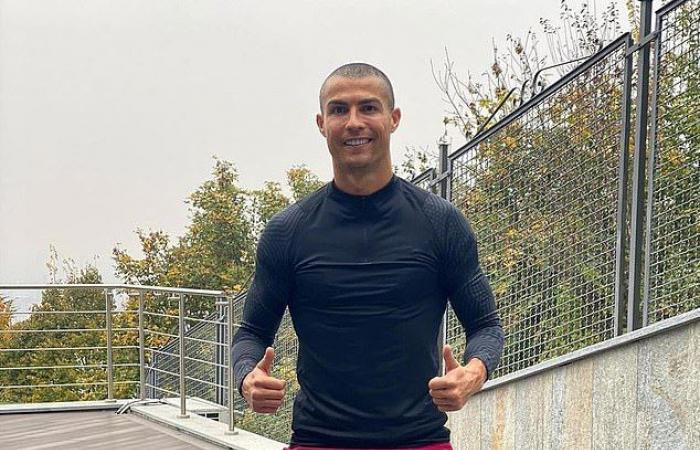 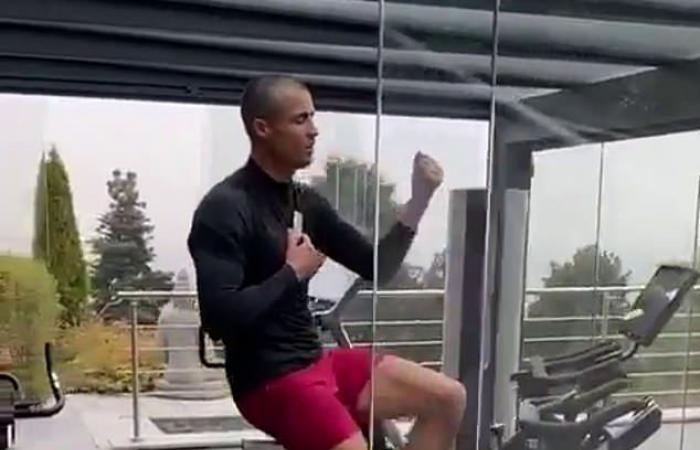 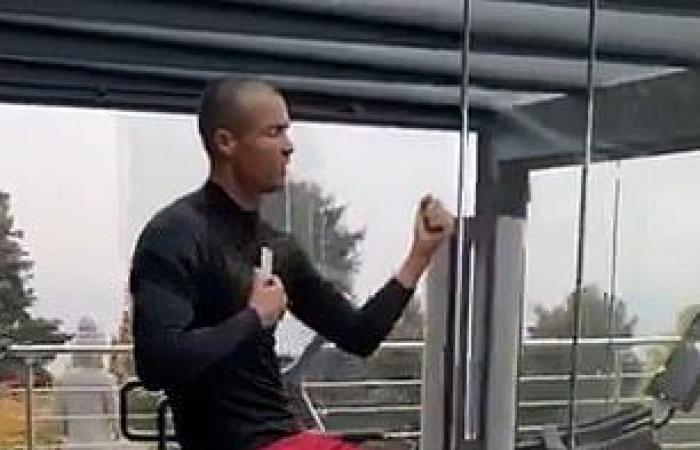 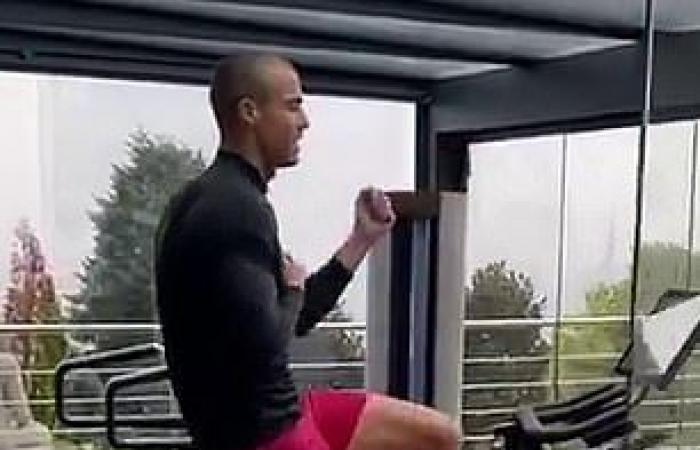 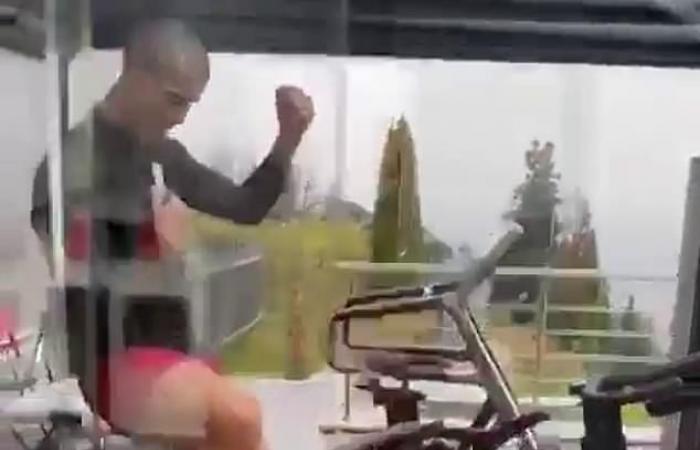 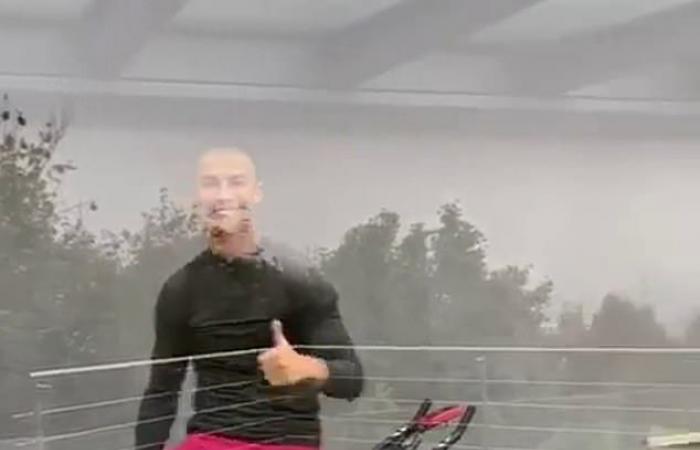 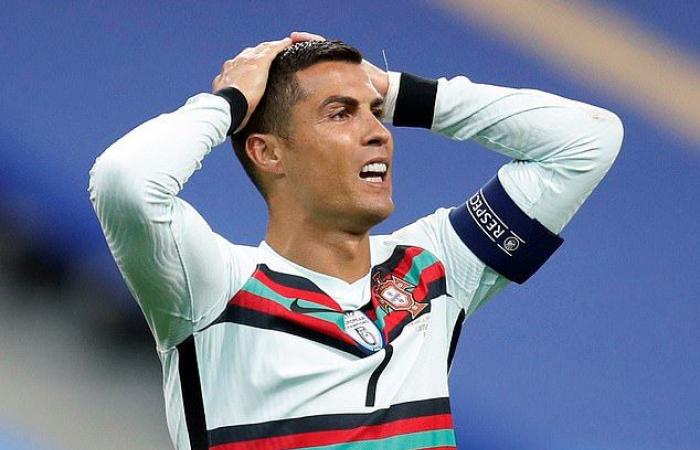 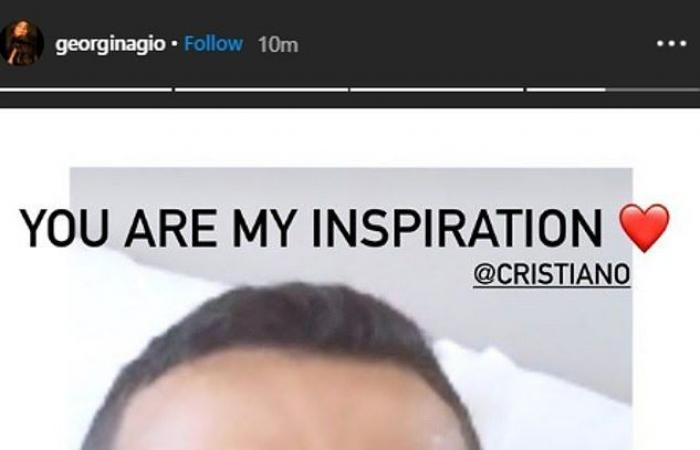 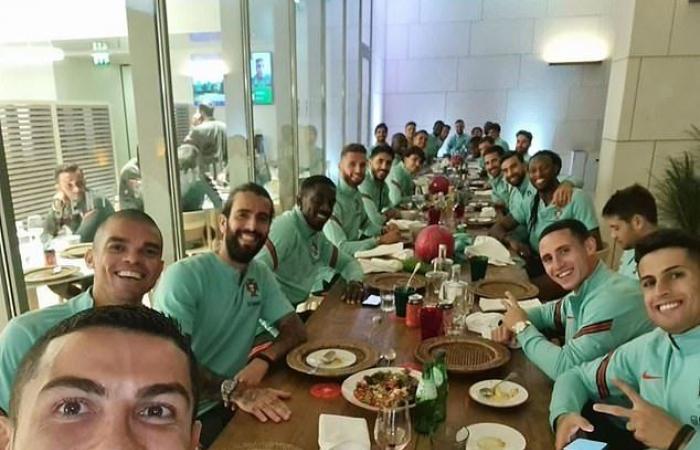 Cristiano Ronaldo shaved his head after being diagnosed with COVID-19 during quarantine.

The 35-year-old soccer player took to Instagram to showcase the new look. He smiled and gave the camera his thumbs up before working out at his fancy home gym.

The sports star grinned from ear to ear and wore a tight black gym top and pink Nike shorts.

New look: Cristiano Ronaldo shaved his head after being diagnosed with COVID-19 during quarantine

Then he jumped into his modern glass gym and jumped on an exercise bike.

He was filmed from outside on the bike, smiling and peddling, and didn’t seem thrilled to be stuck inside.

Ronaldo pumped the air with his fist for an additional triumph.

Ronaldo watched his Portuguese teammates train from the balcony of his room at the Oeiras base on the outskirts of Lisbon on Tuesday evening. 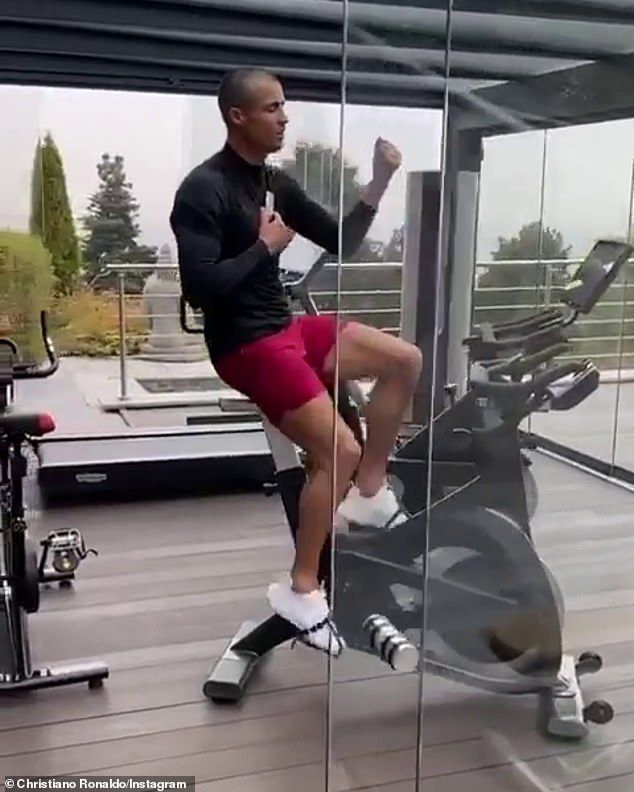 Still there: The 35-year-old soccer player went to Instagram to present the new look. He smiled and gave the camera his thumbs up before heading to his fancy gym for a workout 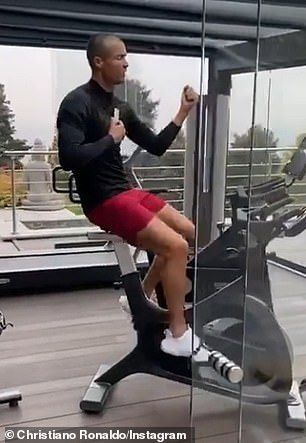 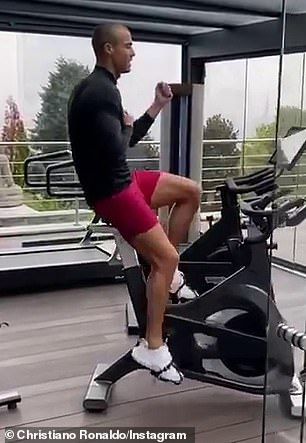 “No team can be better without the best player in the world, but this team has already shown that together they have the ability to tackle the situation,” he said.

‘He’s handling the situation very well. He’s in the room and says he wants to play, he’s talking to us from above [from his balcony.

‚He is completely asymptomatic, he is OK, without any symptoms, he doesn’t even know what happened to him.‘ 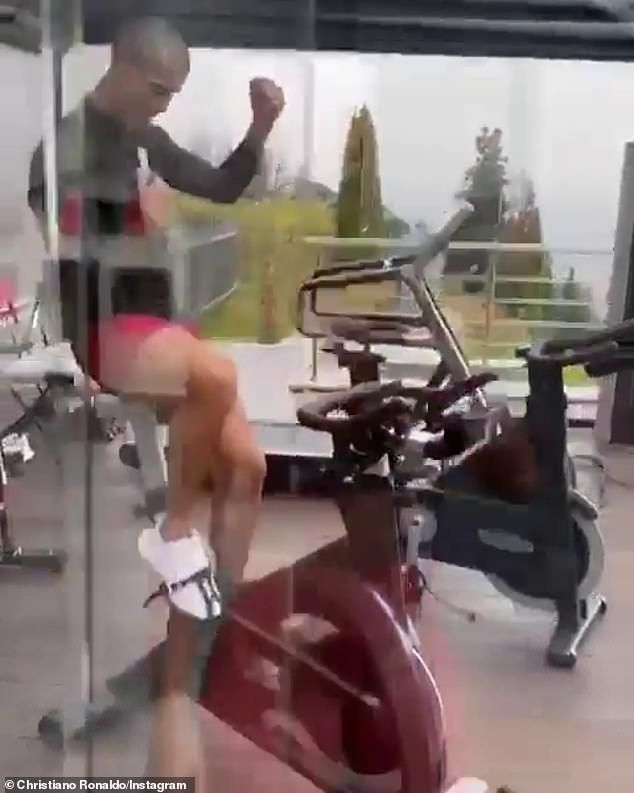 Working out: He then hopped inside to his mordern, glass gym, jumping onto an exercise bike 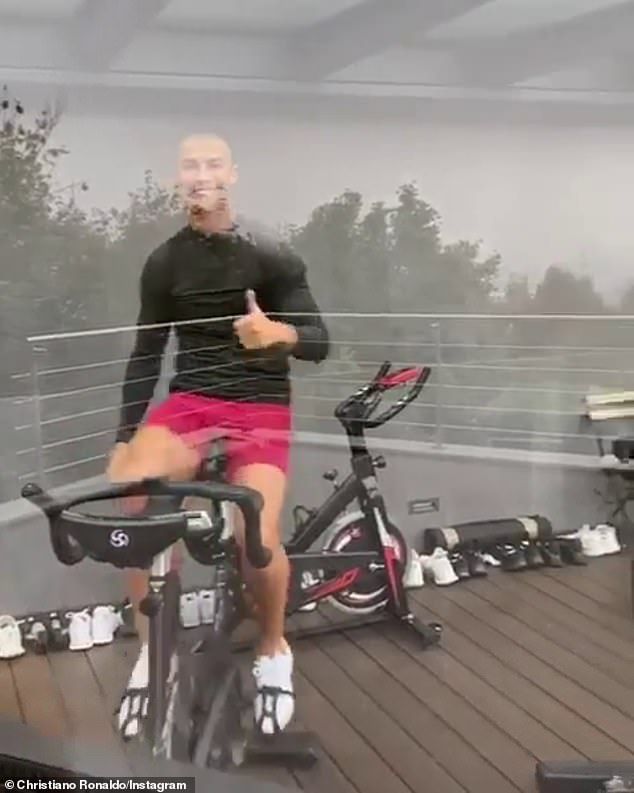 All good: He was filmed from the outside, on the bike, smiling and peddling, seemingly nonplussed to be stuck indoors

The five-time Ballon d’Or winner played for Portugal against France in the Nations League and Spain in an international friendly last week, meaning that he has come into recent contact with a host of football’s top stars.

During the game against France on Sunday night, Ronaldo was seen shaking hands and with a number of top stars including PSG’s Kylian Mbappe.

Ronaldo played all 90 minutes of the game at the Stade de France in Paris, which ended goalless.

There is concern for his international team-mates after Ronaldo posed for a picture with them just hours before the news was announced, with the former Manchester United and Real Madrid star smiling for a selfie at dinner. 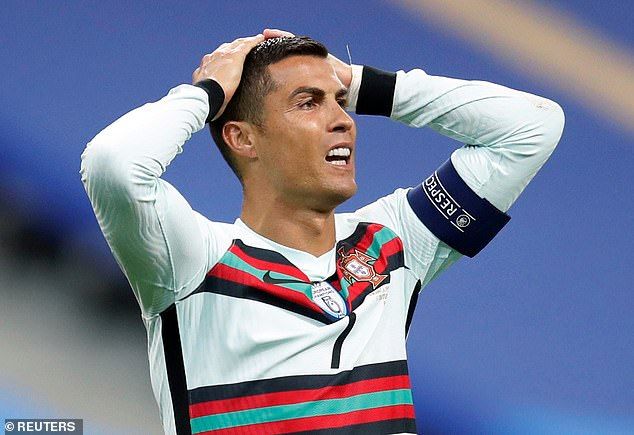 Isolation: The beauty, 26, was keeping herself busy after the announcement on Tuesday that Juventus star Cristiano, 35, had gone into isolation but was asymptomatic 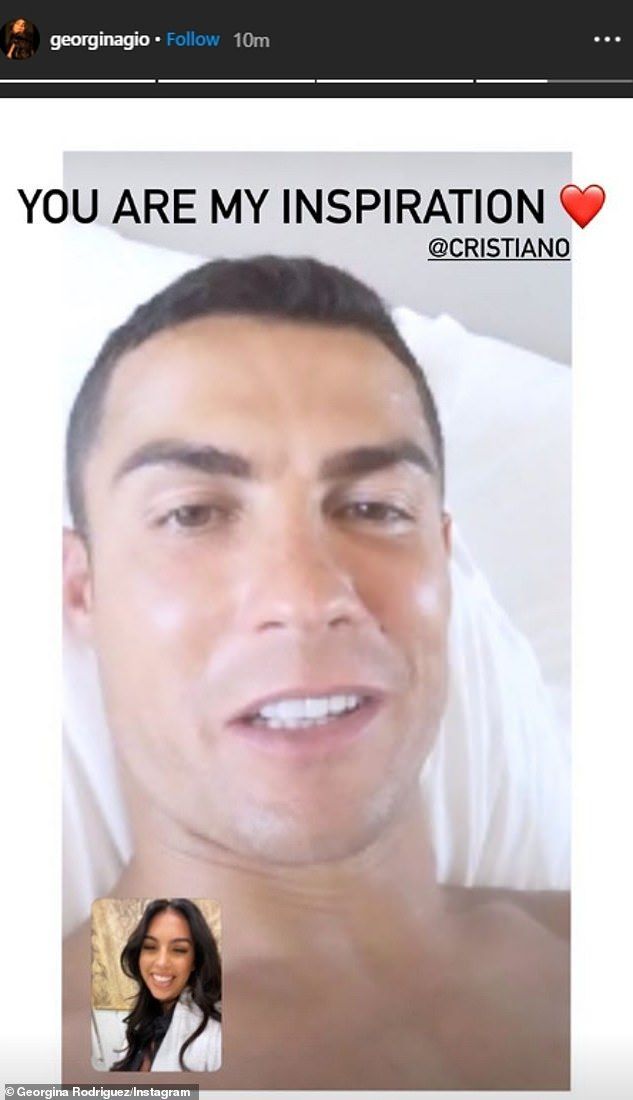 There for him: Georgina immediately posted a picture that appeared to show her on a FaceTime call with the player, calling him ‚my inspiration‘

Mere minutes after the announcement was made, Ronaldo’s girlfriend Georgina Rodriguez posted a picture to Instagram which appeared to show the Portugal superstar in good spirits during a FaceTime call with her.

Alongside the snap, she wrote ‚You are my inspiration @Cristiano.‘

Following their stalemate on Sunday Portugal remain top of Group A3 and although Santos knows Ronaldo will be missed, he has faith in his players.

He added: ‚Any player who is absent due to Covid-19 is a big loss, and Ronaldo’s absence is probably even greater [than anyone else’s].

“But I have absolute confidence in the players who will play.”

The couple shares daughter Alana Martina, two. Ronaldo has three other children, twins, Eva and Mateo, three born in the United States through surrogacy, and the oldest child, Cristiano Ronaldo Jr., 10, whose motherhood is a mystery. 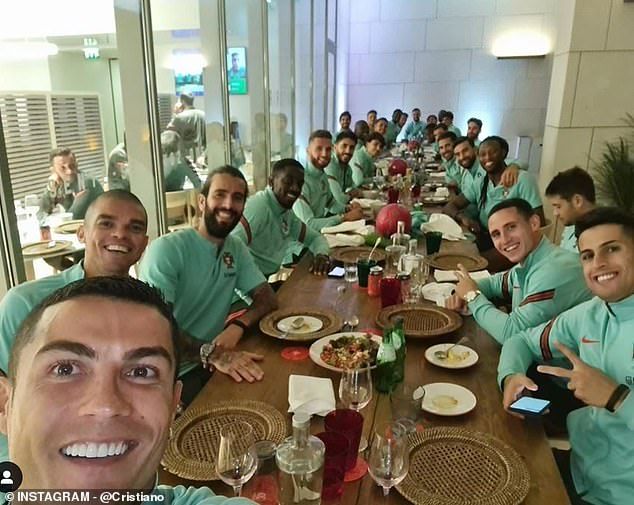 Hours before: Ronaldo (bottom left) posed for a photo with his teammates a few hours before the news broadcast

These were the details of the news Cristiano Ronaldo debuts in quarantine with a new buzzcut … after... for this day. We hope that we have succeeded by giving you the full details and information. To follow all our news, you can subscribe to the alerts system or to one of our different systems to provide you with all that is new. 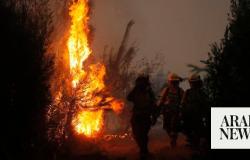