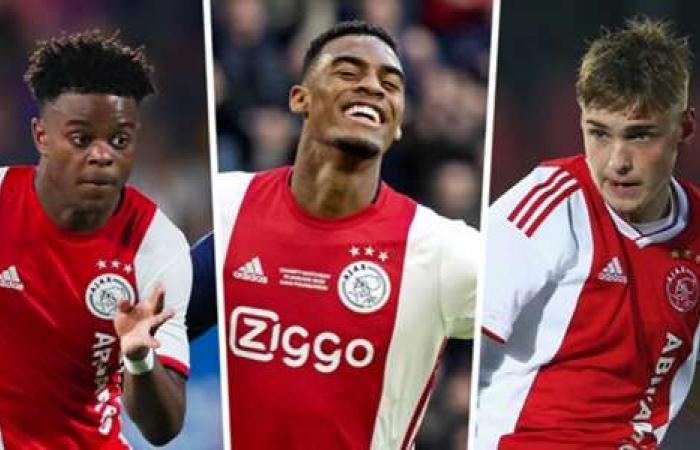 The Dutch giants may have said goodbye to the local heroes from their 2018-19 European run, but their talent belt isn’t slowing down

Ajax took the Champions League by storm in 2018/19 when they defeated Real Madrid and Juventus on their way to the semi-finals of Europe’s leading club competition.

With Matthijs de Ligt and Donny van de Beek, who played a key role for the Dutch giants, the football world was again fighting for superlatives when it came to honoring Ajax’s academy structure.

The Amsterdam production line is considered one of the best graduation schools for any young player in world football and continues to produce players who are among the best in the world.

And it’s not just Dutch child prodigies developed with Ajax who can entice teenagers from around the world to join them with the dream of one day representing the first team at the Johan Cruyff ArenA.

But now that De Ligt and Van de Beek have gone to new heights and a new Champions League campaign against Liverpool is due to start on Wednesday, who are the next Ajax youngsters fans all over the world can look forward to?

The league’s youngest debutant and goalscorer in the club’s history, Gravenberch has long been compared to Paul Pogba for having a long-legged running style and the ability to choose a pass few others on the pitch could dream of.

With four goals and two assists in his first 17 games in the senior national team, he is already a key figure in Erik ten Hag’s team. Despite increased competition in midfield this season, he has started three of the club’s first five league games after being forced to suspend the other two due to a positive Covid-19 test.

However, Gravenberch is not the only youngster who could be involved when Jürgen Klopp’s team comes to the capital.

Nineteen year old Jurrien Timber jersey No. 2 was presented at the beginning of the season and has so far made three appearances.

Sergino Dest’s departure to Barcelona, ​​who can play either in center-back or right-back, could open the door for Timber, whose twin brother Quinten is recovering from a broken foot and is a talented midfielder himself, to earn more minutes.

On the other side of the defense Devyne Rensch The 17-year-old appeared to have had an excellent preseason and seemed ready to step in once Nicolas Tagliafico moved on.

As you would expect, there are quite a number of players currently playing for Jong Ajax in the youth second division.

Perhaps the most exciting is the 17-year-old striker Naci Unuvarwho became the youngest player to score on his Ajax debut in January.

Most comfortably at play from a wide range, Unuvar was previously linked to Manchester United and Barcelona but it is hoped that over the next 12 months he will step up to fill the void Hakim Ziyech left after joining Chelsea.

Another approaching collecting minutes for the first team is Sontje Hansenwho won the Golden Shoe at the U17 World Cup in Brazil just under a year ago.

The 18-year-old has already made his senior debut for Ten Hag and recently devoted his future to the club despite Manchester City’s interest in signing him during the January transfer window.

His regular strike partner for Jong Ajax is an 18-year-old compatriot Brian Brobbeywho has scored 12 goals and 21 games for Jong Ajax since the start of last season.

Brobbey’s pace and strength, one of the most physically imposing teens in the world, along with his finishing ability, has been compared by some to Romelu Lukaku.

Hansen and Brobbey typically benefit from the playing skills of a deep-lying midfielder Kenneth TaylorThe 18-year-old, who at his age is considered one of the best passers-by in all of Europe, has been at the heart of Ajax and the Dutch youth teams for several years.

Taylor usually plays alongside the 17-year-old Youri Regeerwho has been dubbed “the next Frenkie de Jong” by some and will likely make the leap to the first team in the next 12 to 18 months.

Aside from their Dutch talents, Ajax continues to secure some of the best talent from around the world.

You beat Chelsea to sign the Brazilian playmaker Giovanni Earlier this year, the former Santos starlet was already a regular in the Jong Ajax line-up after arriving from South America.

There is also a strong Scandinavian influence with the 17 year old Danish playmaker Christian Rasmussen After arriving at FC Nordsjaelland at the beginning of the 2019-20 season, he had an excellent first year with the club.


He was joined by fellow countryman that season Jeppe Kjaerwho is already well-known in his home country and became the youngest debutant and goalscorer in the Danish Superliga earlier this year when he played for AC Horsens.

Compared to ex-Ajax star Christian Eriksen, Kjaer started his life with his new club, which plays for the U18. However, it is hoped that by the end of the season he will get close to a spot on Jong Ajax’s squad.

Kjaer may be the most famous 16-year-old at the club right now, but he is far from the only talented player in his age group.

The Eredivisie champions were thrilled to announce they were able to tie wingers in September Amourricho by Axel Dongen on a new contract amid keen interest in the Chelsea winger.

Amourricho, who is most comfortable on the left, scored seven goals in nine games for Ajax’s U17s last season despite playing against players two years older than him.

Check out the latest football prodigies with NxGn:

Another 16 year old who is getting used to playing above his age group is a defender Olivier AertssenThe young center-back is particularly known for his ability to kick the ball from behind and choose a forward pass almost at will.

Behind him, England fans will likely know the name Charlie Setford Over the next few years, the goalkeeper was already capped by the Drei Löwen at U17 level when he was learning his trade on the continent.

But, as is customary in youth football, it attacks players who are most in the spotlight and Ajax currently has three 15-year-old strikers who are starting to make their presence known after impressing in the past 12 months.

striker Julian Rijkhoff has been in electric form so far this season, scoring nine goals in four games for the club’s U17s after making his debut at that level over the course of last season.

He was joined by at U17 level Facebook Facebook logo Sign up for Facebook to connect with David Kalokohwhile Noah Gesser He’s unlikely to be too far behind after scoring 11 goals and three assists for the club’s U16s this season.

What is certain, however, is that the Talent’s conveyor belt at Ajax is showing no signs of slowing down. If even half of the stellar young players currently at the club can make the grade, another deep run in the Champions League may not be too far away.

These were the details of the news The new Van de Beek or De Ligt? Meet Ajax’s... for this day. We hope that we have succeeded by giving you the full details and information. To follow all our news, you can subscribe to the alerts system or to one of our different systems to provide you with all that is new.