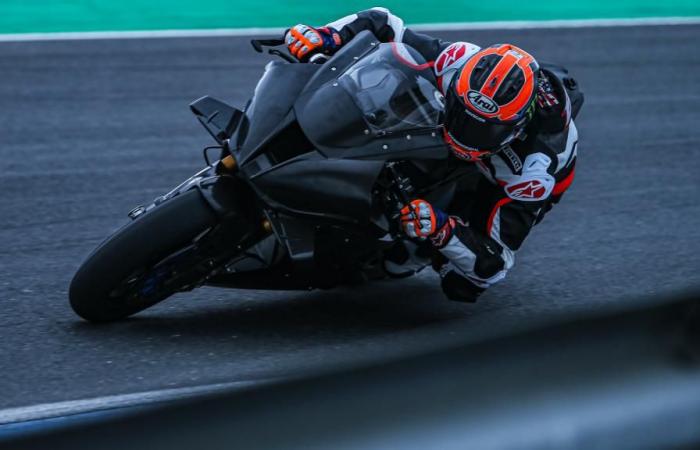 A day after the final round of the 2020 FIM Superbike World Championship season in Estoril, a number of drivers already started preparations for the 2021 season on Monday at the Portuguese circuit. All eyes were of course on Michael van der Mark who after four seasons having been active on a Yamaha made his debut on the BMW S1000RR, the machine with which the Dutchman will compete next season.

Many (Dutch) eyes were naturally focused on Van de Mark who got his first taste of the BMW S1000 RR machine. The Dutchman appeared on the track in a completely black machine without sponsor logos on Monday, due to the fact that the Dutchman is still under contract with Yamaha for a number of weeks. This was one of the mutual agreements between Van der Mark, BMW and Yamaha, as well as the agreement that neither party should disclose any information about their first joint appearance.

The BMW Motorrad WorldSBK team had indeed brought a development plan for Sykes and Van der Mark on Monday. There was a new engine and a new gearbox, a different chassis, carbon wheels and the new aerodynamic package (winglets) of the M1000 RR brought from Germany.

Van der Mark, however, started Monday on the machine that BMW was active with last season, while Sykes took care of the necessary development work from the start of the day. Just before the day came to an early end due to the rain around 13:00, we also saw Van der Mark driving a number of laps with the so-called ‘winglets’. In total, Van der Mark drove 30 laps on Monday during his first day for his new employer.

Despite the fact that no single second of attention was paid to driving fast lap times – this test was exclusively intended for Van der Mark and BMW to collect as much useful data for the coming winter months – Van der Mark managed to impress with a fastest clocked lap time of 1’38,300. Obviously, this is not yet a top time, but the image that the Dutchman only had to give up 0.4 seconds on the fastest lap time of his new teammate does offer perspective.

Redding recorded the fastest lap of the day with a lap of 1’36.581 on Monday before it started to rain around 1:00 pm in Estoril. A fine piece of work by the Briton who finished second in the final position behind Jonathan Rea last season and set a new WorldSBK lap record on the Portuguese circuit with this lap.

Originally it was planned that testing would take place on Monday until 6:00 PM at Circuito do Estoril, but as mentioned earlier it started raining lightly around 1:00 PM, but not much later it stopped with light rain and came the water poured out of the air for the rest of the afternoon. As a result, no one came into action anymore, which meant an early end to this first winter test in preparation for the 2021 season.

Below a series of beautiful photos of Van der Mark’s debut on the BMW S 1000 RR made by Randy van Maasdijk.

* Racesport.nl visitors pay a minimum of € 15.00 and are therefore connected to the site as a Racesport.nl supporter for a season. In January you will automatically receive an e-mail asking if you want to register again for a season.
When paying, please state your email address where you wish to receive the newsletter. You can also send an email to [email protected]

These were the details of the news Successful first BMW shakedown test for Michael van der Mark in... for this day. We hope that we have succeeded by giving you the full details and information. To follow all our news, you can subscribe to the alerts system or to one of our different systems to provide you with all that is new.