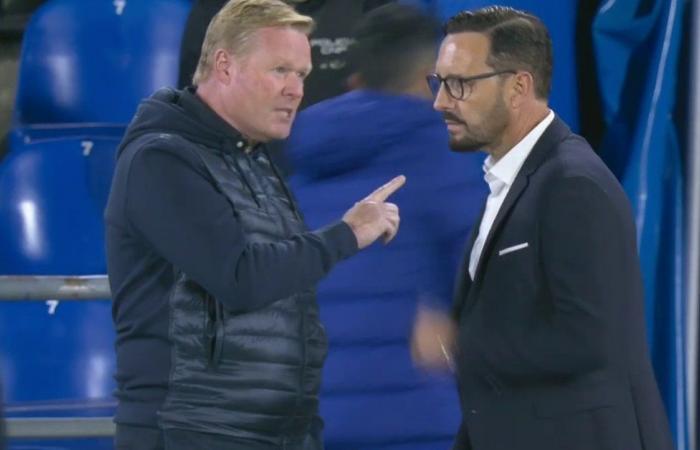 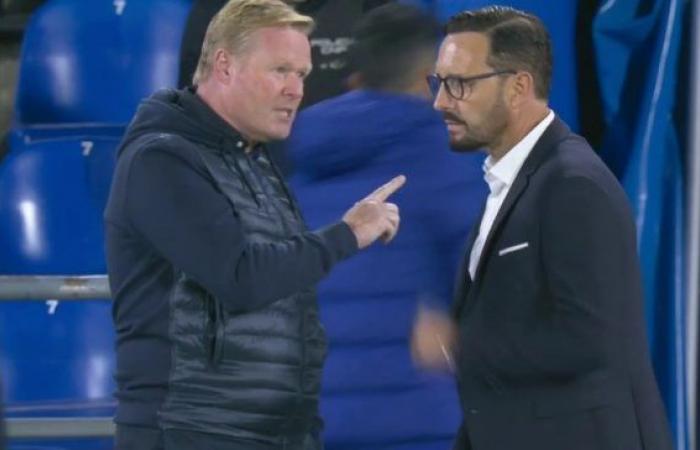 The tense cross between Koeman and Bordalás

He Barcelona suffered a setback this Saturday while visiting the Getafe for the sixth date of the Spanish League. The Catalan team lost 1-0 and the coach Ronald Koeman He withdrew from the court confused, not only by the adverse result, but by a tense episode that he lived with a player from the rival team, a situation that led to a cross between statements with his colleague José Bordalás.

Once the referee marked the end of the match, Koeman walked towards Bordalás and, instead of shaking his hand, he began to reproach him for something. The television cameras made clear the Dutchman’s anger, who even raised his index finger to Getafe DT, who remained calm during the few seconds that the talk lasted. The situation did not pass to greater and finally both retired to the changing rooms.

Already before the press, both Koeman and Bordalás revealed what had happened, although each one gave their vision of the event. What the Barcelona coach claimed from Getafe was that the defender Nyom had insulted him. “Player number 12, Nyom I think, has shown me disrespect. He has said very ugly things to me several times that I will not repeat. I have told him to talk to him, that this is not what to do ”, commented the coach of the Blaugrana team.

Bordalás, for his part, confirmed the proposal made by the rival’s coach. “It is true that Koeman he has commented to me that ”, he admitted in his press conference. However, he chose to defend his team and commented: “I have not spoken with the player yet, I will do it tomorrow calmly and calmly.”

“I have already told Ronald that I will talk to him tomorrow because insults have no place in our team but I insist that I doubt very much that Nyom used such insults to him. I know him well and he is very competitive and he lives the games a lot, but I also know that he is a very respectful person, “he added.

Nyom was one of the protagonists of the meeting but not precisely because of a positive aspect. The Cameroon-born footballer elbowed him hard in the face Lionel Messi and also had a defiant attitude towards Ansu Fati. “18 years old and you throw yourself like that?”, I shout to the young man from Barça in an action in which he ended up on the floor.

Those weapons earned the Cameroonian defender one of Getafe’s outstanding footballers in the 1-0 win over Barcelona. With those three points, the Bordalás team has surprised and has been placed as one of the leaders of the League together with Cádiz, Granda and Real Madrid, which today lost unexpectedly 1-0. The pointers add up to ten units, while the Koeman set has seven.

Messi’s Barcelona fell to Getafe, lost their unbeaten record in La Liga and did not take advantage of Real Madrid’s defeat

A painful elbow, shot on the stick and the wasted chance at the last minute for the tie: Messi’s game against Getafe

*The article has been translated based on the content of Source link by https://www.infobae.com/america/deportes/futbol-europeo/2020/10/18/tenso-cruce-entre-koeman-y-el-dt-del-getafe-el-entrenador-del-barcelona-reclamo-que-un-jugador-le-dijo-cosas-feas-durante-el-partido/
. If there is any problem regarding the content, copyright, please leave a report below the article. We will try to process as quickly as possible to protect the rights of the author. Thank you very much!

These were the details of the news Tense crossover between Koeman and Getafe coach: the Barcelona coach claimed... for this day. We hope that we have succeeded by giving you the full details and information. To follow all our news, you can subscribe to the alerts system or to one of our different systems to provide you with all that is new.