Disrespect: Aguero grabbed by the neck of the Queen – Sport... 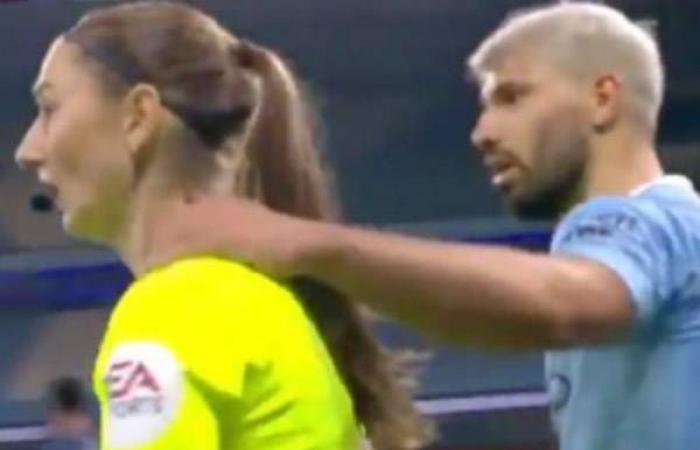 After a bad season opener, Manchester City were looking for something that would get them back on track with the goal of fighting for the championship once again. This ‘something’ is called Arsenal, the rival she loves so much to meet. Tonight (Saturday), City recorded their seventh straight win over the Gunners in the Premier League. This time it ended in a big small 0-1 thanks to a winning goal by Raheem Sterling in the first half.

The one who grabbed the headlines was Sergio Aguero, and not just because of his return to the pitches after four months. In the 42nd minute, the Argentine striker was disappointed with the decision of the Queens, who gave the ball to Arsenal, and in response grabbed it by the neck. The striker was not punished, and in the 65th minute he was replaced. “If Kwon were a man, he would not behave like that,” NBC wrote. Pep Guardiola Did not get excited and came out in defense of his star: “Oh really, Sergio is the nicest person I know. Look for trouble elsewhere, not in this case.”

Hero of the evening Rahim Sterling Happy to have his Argentine friend back in the attacking squad: “With Sergio on the pitch we can conquer at any given moment. He is critical to our struggle in the various frameworks and we are happy he is back.” Although the Citizens are only in fourth place, the English star does not worry: “We are only in October. We have seen so far this season some particularly surprising results. It is a long season, we will have to stay focused and continue what we started today.”

Guardiola, Who recorded his 500th career win as a coach (including Barcelona B), was pleased with his trainees in general and speculated in particular: “It was an important victory. The fact that we kept a clean sheet is important. Ederson is amazing, he is a professional. He is so good.” The Spanish manager can also be pleased with his new brake, which cost no less than 68 million euros. In just his second appearance, Ruben Diaz put in a wonderful game, in which he touched the ball (102 times) more than any other player on the grass, and shared the most dedication (89) in the game.

In addition, Guardiola commented after the game on the injury blow to his team: “Gabriel Jesus is injured, and it will take a long time for him to return. A few more months. Benjamin Mandy will miss 3-4 weeks, while Americar Laporte will miss a week maybe, or ten days” . As you may recall, on Wednesday evening the Blues will host Porto, as part of the first round of the home stage of the Champions League.

on the other side, Mikel Arteta Can be disappointed with his second loss in his last three league games: “We deserved more from this game. I am very happy with the ability we have shown. We came with a good attitude, we were not afraid and we pressed very hard on City.” The Spanish manager can be pleased that Thomas Parti, the brilliant acquisition from Atletico Madrid, made his team debut when he came on in the 83rd minute. In the next round the Gunners will meet Jamie Vardy and Leicester City, for a particularly intriguing summit meeting.

*The article has been translated based on the content of Source link by https://www.sport5.co.il/articles.aspx?FolderID=252&docID=351827
. If there is any problem regarding the content, copyright, please leave a report below the article. We will try to process as quickly as possible to protect the rights of the author. Thank you very much!

These were the details of the news Disrespect: Aguero grabbed by the neck of the Queen – Sport... for this day. We hope that we have succeeded by giving you the full details and information. To follow all our news, you can subscribe to the alerts system or to one of our different systems to provide you with all that is new.