Thomas De Gendt apologizes for statements about the feeling of … 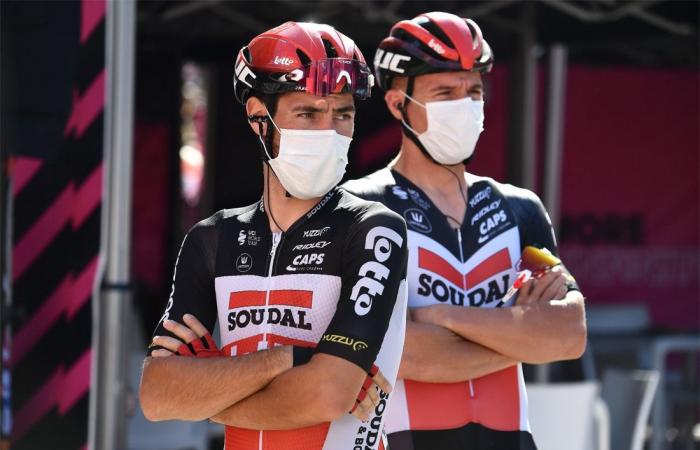 The corona virus hangs like a dark shadow over the Tour of Italy, but great Giro boss Mauro Vegni does not intend to stop the cycling circus sooner, as was requested by Education First, among others. He also disagrees with the criticism from Thomas De Gendt, among others, that the organization would not do enough to protect the riders. “There is also bad behavior within the bubbles of the teams, but I will not go into that further,” he rebounds the ball. In the meantime, De Gendt apologized for his statements.

Following the departure of Mitchelton-Scott and Jumbo-Visma due to positive Covid cases, news came yesterday that seventeen more police officers had tested positive for the virus. Enough reason for some to question the continuation of the Giro. EF Education, already good for two stage victories, has suggested to organizer RCS to end the Giro next Sunday. The International Cycling Union UCI already answered the request negatively. The authority to stop the Giro lies with organizer RCS or the Italian government.

Organizer RCS does not intend to stop prematurely. “We take the same measures that were used in the other major races, so I don’t see why the Giro would be any worse organized than the rest,” Giro boss Mauro Vegni told Cyclingnews, among others.

“On the first day of rest, we had eight positive cases. How many were there in other places in the world? We are in October, the trend is going up. Today there were almost 9,000 cases (in Italy), so there is clearly a bit more stress than in August. ”

Read more below the photo

Vegni says he never received an official request from Education First to cancel the Giro early. “I think it was something written between teams and maybe for the UCI as well. I received some things, but I haven’t seen EF manager Jonathan Vaughters here. When I spoke to the guys from the team about it this morning, they didn’t know either, so you can draw your own conclusions. ”

“Thomas De Gendt must be careful what he says”

It was Thomas De Gendt who rang the bell for the cameras of the VRT yesterday. “Things are going badly in this Giro. We have been discussing with the riders in the team for 20 minutes whether or not to start because we are starting to feel unsafe. There are riders who prefer not to start, others do. Everyone is free to do so. I am one of the riders who would rather not start again. ” De Gendt also suggested aloud that he doubted whether the 17 police officers who tested positive were all involved in the E-Bike event, a recreational version for electric cyclists, rather than the real Giro. “I have the feeling that the organization is hiding things and giving it a twist.” (read more)

A comment that Vegni couldn’t laugh at. “I called his team manager during the race and said that if he says something, he should be careful what he says. To say that we may have manipulated the results is very serious. International health is at stake here. ”

To then give a sneer to the cycling teams themselves. “I respect the riders and the riders’ fears, because of course we are talking about health. But those around them, who are supposed to create a bubble of calm around them, shouldn’t behave this way. There is also wrong behavior within the bubbles of the teams, but I will not go into that further. ”

Thomas De Gendt returned to his statements on Twitter on Friday. “The news about the seventeen police officers came two hours before the start of Thursday’s ride,” writes the Lotto-Soudal rider. “At that time there was no official statement from the organization. That gave me the impression that they wanted to hide the positive tests. ”

“In an interview with Sporza I therefore expressed my concern,” said De Gendt. “But I spoke too quickly, as I didn’t have all the information yet. With my response I may have damaged the reputation of the organization and I would like to apologize for that. My feeling of insecurity was rather personal, which I think is normal in the current situation. But I do not feel insecure during the race, as I am really convinced that it is organized in a safe way. ”

Under the tweet it rains reactions from people who are sure that De Gendt’s reaction was imposed from above. “We prefer to have your own unvarnished opinion”, it sounds.

*The article has been translated based on the content of Source link by https://m.nieuwsblad.be/cnt/dmf20201016_92593488
. If there is any problem regarding the content, copyright, please leave a report below the article. We will try to process as quickly as possible to protect the rights of the author. Thank you very much!

These were the details of the news Thomas De Gendt apologizes for statements about the feeling of … for this day. We hope that we have succeeded by giving you the full details and information. To follow all our news, you can subscribe to the alerts system or to one of our different systems to provide you with all that is new.