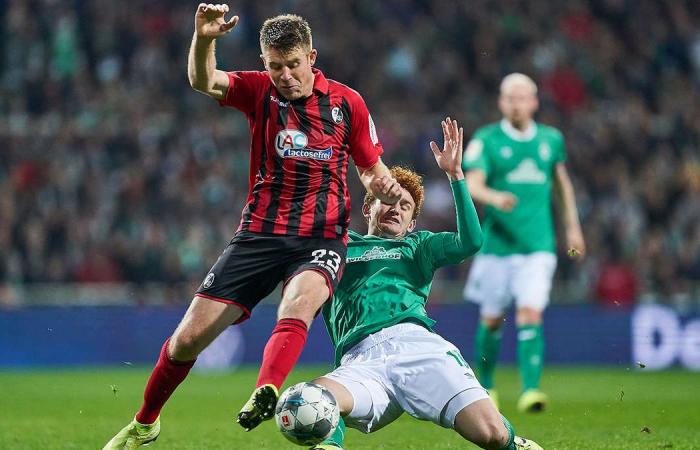 Freiburg – It has been an integral part of the starting XI of SC Freiburg for some time now: Dominique Heintz. Across the seasons, the central defender has played the last ten mandatory games from start to finish. A good rate. The freshest impression, however, is the 0: 4 against Borussia Dortmund on the previous matchday – a notch that the 27-year-old would love to wipe out on Saturday in the home game against SV Werder Bremen.

Before the SV Werder Bremen – especially in front of two green and white strikers and an ex-colleague – the former U21 international has the greatest respect.

What is the unique selling point of SC Freiburg? What is special about this club?

It’s this family atmosphere, this very close togetherness. Everyone knows each other, everyone greets each other when they come to work. There is a pleasant friendliness among all employees. Our fans are also exceptional. It’s this cohesion, everyone is there for everyone.

Do you see certain similarities to Werder Bremen in this regard?

Everything I’ve heard about Bremen shows certain parallels. Werder Bremen is such a club, as I know from many conversations with Nils Petersen.

Werder Bremen’s opponent SC Freiburg: On the way to a well-known traditional club

Were these things decisive for you when you moved from Cologne to Breisgau two years ago?

It was a reason, a very important one to me. I also got to know similar conditions in Kaiserslautern and even in Cologne, although you don’t think so there. So I wanted to play for such a club again. Freiburg also convinced me with the exemplary work that has been done there for years. A club on the way to a well-known traditional club, on the best way to become a very big club in the league.

When you switched in 2018, you also had offers from clubs such as Frankfurt, Schalke and Mönchengladbach, which are more reputable. What else spoke in favor of Freiburg?

There were several considerations. The coach was important to me, I talked to Christian Streich and was enthusiastic about this conversation. Incidentally, also from the perspectives that were offered to me. I didn’t just want to be part of the team at one of the big clubs, I wanted to be sure that I could get my playing time. And I wanted to take responsibility.

You spoke to the trainer. Please describe the phenomenon Christian Streich!

A difficult task because it has so many qualities. The way he speaks to us, how he trains us, how he tactically adjusts us is extraordinary. I learned a lot from him and from him, and I still do. Christian Streich pays attention to every detail. All the little things are important to him, that’s what defines him.

Have you been able to achieve your goals under Streich’s leadership?

Fortunately, Werder Bremen managed to stay in the league

Not even behind Werder Bremen? Hasn’t the sports club overtaken Saturday’s opponent long ago? Freiburg only narrowly failed to qualify for Europe, Bremen’s goal for the season, while Werder struggled in the relegation battle and relegation.

Last season didn’t go so well for Werder Bremen, quite unhappy in every respect. But in the end Bremen managed to stay up, fortunately from my point of view, because relegation would have lost an enormously important part of the Bundesliga. But Werder remains a well run club, which I really enjoy playing against. I trust the team that they will have a better season now.

How are the weights distributed before the current game? Who is favorite

It is still too early on matchday four for such an assessment. We lost the last game and want to sell better at home. The last season doesn’t count anymore. Everything starts from scratch again. And Werder Bremen currently has two points more than us on the account.

Despite the initial success, Werder Bremen is again counted among the relegation candidates after the last performance shown. You relegated with Cologne. What experience do you have with the struggle for existence. What is important?

It was during the season when we were involved in the European competition with Cologne. Lots of English weeks, a lot of work if the squad is too small. In addition, many supports fell out for a long time, at times even eight regular players. In this respect a situation like at Werder Bremen last year. We couldn’t cope with that, so we were relegated on the last day of the match. If you are below, it can sometimes go very quickly. A vortex arises from which you can no longer free yourself. Another parallel to Bremen last season: Often played well, but didn’t score any points in the end.

Dominique Heintz on Werder Bremen: Cohesion was decisive for the rescue

In your opinion, why did Werder Bremen still manage to keep the class?

The cohesion of the team and the club is crucial for the hoped-for rescue. Werder was exemplary in this crisis, not only because the sporting leadership stuck to coach Kohfeldt, whom I consider a very good one. Not everything went down the drain like it did in my parent club Lautern when I turned professional, or like recently at Hamburger SV.

With goal scorer Nils Petersen and assistant coach Florian Bruns, two people with a Werder past are active in Freiburg. What do you say about Werder Bremen? Will you be questioned more this week?

They only talk good things about the ex-club. Nils has been gone a long time, as has our assistant coach. Of course, they still have contacts and information. But currently they are not specifically asked for information because we are doing our thing, preparing as always. We look to ourselves first and foremost.

Two strikers stand out at Werder Bremen, Niclas Füllkrug and Milot Rashica. Who do you fear most?

Both, because I know both of them well, have played against them a number of times. I have known Füllkrug for a long time, and even better, since playing and training courses in the DFB’s youth teams. He’s a great guy in human terms, an outstanding striker, strong at the ball and dangerous by standards. Rashica comes from outside, is extremely fast-paced and good in one-on-one situations. We have to take care of both. And of course to Leo Bittencourt, with whom I played in Cologne. A little guy with a big heart, he always smacks and scores decisive goals.

Twice in the last season, as you can definitely remember: in Freiburg and also at Schalke, each with 1-0 victories, as well as against Arminia Bielefeld on the last matchday.

I know. And I hope he doesn’t score against us again on Saturday. Or if so, then only if we lead 2-0 and he scored the consolation goal in added time. This is the only thing I would allow him under certain circumstances. (The interview was conducted by Hans-Günter Klemm)

These were the details of the news Dominique Heintz (SC Freiburg): “Fortunately, Werder Bremen is still here!” for this day. We hope that we have succeeded by giving you the full details and information. To follow all our news, you can subscribe to the alerts system or to one of our different systems to provide you with all that is new.