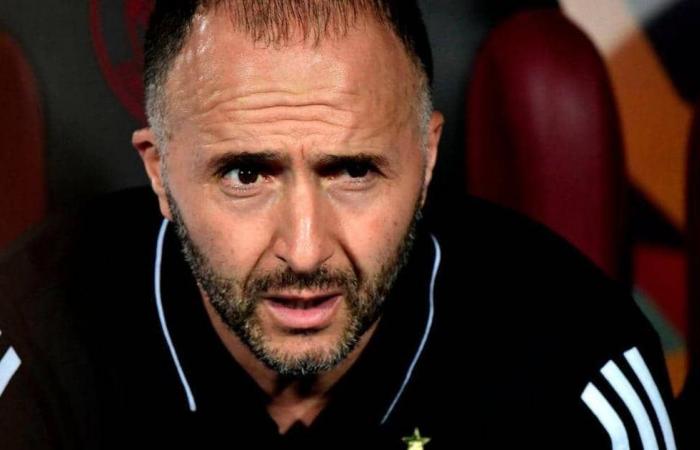 And he managedDesert warriors“It has been impossible to touch something since taking over the coach Jamal Belmadi Leadership of the national team, with more than 723 days without defeat and 19 games without disappointment, all of that in less than two years.

The meeting comes as part of a “clean series” under the leadership of Belmadi, who has turned into a symbol of hope, to fulfill the dreams of an entire people, and may achieve a 35-year-old revenge, in a confrontation that is the second historically for the Algerian team, against the national team ranked 11th in the world in classification.FIFA“.

When he was a player Algerian National Team They are running through the tails of disappointment, after the bitter exclusion from the first round of the 2017 African Cup in the jungles of Gabon, the masses were raising the loud voice to save the ship from sinking and demanding the use of a local coach who knows well the heat of Algerian blood and mentality, to put an end to the series of foreign coaches, most of whom failed to lead a battalion Desert Warriors.

At that time, all eyes were on almost one name: Jamal Belmadi, who was making history and glories in the Gulf stadiums.

Simultaneously, the former president of the Algerian Football Association, Mohamed Roura, was indifferent to who would succeed the Belgian coach, Georges Licens, who stayed only 3 months, and thus the Algerian national team entered a dark tunnel, due to personal interests and narrow calculations.

With the exception of Bosnian coach Vahid Haliloi, he is the only foreign national to captain the national team Algeria For a historic qualification for the second round in the 2014 World Cup, the fans and critics were fully convinced that Algeria was a birth, and that its local coaches children could raise the flag of their country in the largest football forums, bring joy to hearts and write the history of an entire nation.

The Algerians owe their credit to local coaches such as Rachid Makhloufi and Mohieddine, who went against the help of a foreign coach to qualify and then their country participated in the first World Cup in 1982 in Spain, before Rabah Saadane paved the way to the 1986 World Cup in Mexico, and the late Abdel Hamid Karmali won the 1990 African Championship on land Algeria, then coach Saadane returns after two decades and records Algerias presence in the 2010 FIFA World Cup in South Africa.

These accomplishments were conclusive evidence for a wide spectrum that local names were able to make the impossible and rewrite history anew.

Meanwhile, time was running out for the newcomer Presidency of the Algerian Federation Khair El Din Zetchi in the spring of 2017, to choose one of the local names, but he stuck to the idea of ​​the foreign coach.

When Zathi brought the Spaniard Lucas Alkaraz, who had missed Algerias chance to qualify for the World Cup in Russia 2018, before the man recounts his calculations and sought help from the local coach, he chose Rabah Majer, in a scenario that the best optimists did not expect, especially since the man was away from training for more than 15 years, which is This resulted in weak and disastrous results that were enough to bring down the golden heel, after nearly 8 months of the technical model, specifically in June 2018.

It took the president of the Algerian Federation, Noureddine Zetchi, 18 months to be convinced of the votes that were demanding from the start for Jamal Belmadi as a coach for a star-studded team.

Ronaldo votes on it

The man was able to ably decipher the secret code that brought a world team to the bottom, frustrated his best players and made him defeat before immersed teams.

The impossible became a dream, born again after 29 years of achieving the first African star, at a time when dreams faded and the Algerian national team was in a difficult situation, and no one expected a return, and pessimism became the title of the moment.

Today’s match comes within the framework of the Algerian national team’s preparations for the 2022 African Nations Cup qualifiers that will take place in Cameroon, and Belmadi seems determined to win or draw in the worst cases in this match, a match that bears a historical symbolism and remembers the memory to 1985 when Algeria was defeated in competitions. The Four Nations tournament, with a score of 0-2 against Mexico.

This is how the Algerian street awaits the steps of Al-confident who said recently: “I said it since my first press conference. I have great ambitions. We want to control the African continent. We are now the champions of Africa, and therefore we must play in front of the big boys.”

They described him at the time as the mad man, so no sane person was able to analyze what was happening to the Algerian national team in recent years, and ideas wandered away, but eyes of my past stared where the impossible was, and his answer when he was presented to the national team in that case: “I am not a crazy man, I dream and have possession. The will to fulfill our dreams. “

And he said his word on the green grass, to gain great respect on the Algerian street, as for them today he is not an ordinary coach who succeeded in hanging the second African star on the chest of the desert warriors, but rather he possessed a strong word and personality, patriotic and very frank, and he proved that in several difficult stages.

In fact, every match he led with my past with the Greens is in itself a date, according to a rule that the exceptional coach said: “Winning is our only goal.” And match after match, with the past, that rule was drawn in the minds of every player until it turned into a reality that a team does not accept half-wins, and returned From Cairo, bearing titles that were elusive until recently.

Belmadi doubled the joy of the Algerians, and he held the African Cup with merit and other titles, including the best defense and the best attack, so when he returned to the homeland, he received the heroes as if he was a true groom that Algeria loved in 2019.

And that he deservedly deserved the fourth place in the world in the FIFA ranking of the best coaches in the world, this is another evidence of his professionalism as a professional and brilliant coach who convinced the Portuguese player Cristiano Ronaldo to vote on him in the FIFA referendum for the best player and coach awards for the year 2019, and he preferred him to the German coach yourgen club.

The trainer has the ability to be humble

Djamel Belmadi was born in 1976 in the French city of Champaigne-sur-Marne from an Algerian family, and he started playing in different clubs in the Parisian suburbs, and he was only 14 years old, when he took his first steps with the world of professionalism with Mekhtek club at the age of 18, and then emerged as a sports talent Before the Paris Saint-Germain training center opened its doors for him, there he met his friend Nicolas Anelka, and together they formed the first team in 1995.

Belmadi left an imprint and beautiful memories on many of the players he fought with over the green rectangle, including the Yugoslavian Milan Bishevac, who talks about him in a statement to the French press, saying: “Indeed, he is a very respectable person, simple, disciplined and serious. He knew exactly what he was saying, when, why, for and how. “.

The Algerian international player, Mehdi Tahrat, describes him as a role model coach who carries a real man and a very professional coach, and he said of him: “He is strict and leaves no room for details in his work. When we start training, he touches the ball, we feel that he is a great coach and a player who really loves football.”

This character did not come out of a vacuum, as it went through difficult stages and turns, especially in its relationship with Algeria, a relationship that was considered a real test for the man, as he played Belmadi several times with the Algerian national team and in difficult circumstances in which the capabilities were not available.

At the height of the black decade that Algeria knew (1990-1999) Belmadi chose to wear the Algerian jersey and refused to play with the French national team in the youth category when they met an offer before the first summons from the Greens and risked his future for her at a time when FIFA laws did not serve the interests of the expatriate players.

For him, wearing the Algerian shirt is a great honor and a sacred matter, and the Algerian public owes credit to everyone who supported them and stood by them during that difficult period the country went through, and in particular maintains a picture of his past and the distinguished performance he made during the 2004 African Cup of Nations in Tunisia and his decisive passes. He made it despite the bitter elimination of the Algerian team in the quarter-finals against the Atlas Lions.

His story with training

After his retirement from playing, the son of Mostaganem, west of Algiers, in his 30s, went to training from the gate of the Qatari Lekhwiya club, and he excelled in dealing with training techniques and imposed himself as one of the best coaches in the Arab Gulf and won 6 titles at the head of the technical model of Lekhwiya Club and the title of the Gulf Cup as coach of Annabi .

Belmadi spent 15 years playing between Marseille, Paris Saint-Germain, Cannes, Manchester City and others, and he is still receiving offers from several European clubs to be its coach, as his services recently requested 5 French sports clubs, but he still insists on staying true to the Algerian shirt, which was confirmed by the president The Algerian Football Federation recently: “Belmadi has received many offers, and will remain with the Greens until the end of his contract after the 2022 World Cup.”

Today, man’s dreams embrace the sky, and ambition is no longer brown in color, but rather reached great results by meeting adults in the 2022 World Cup.

These were the details of the news A 35-year-old vendetta … will he do it with his past... for this day. We hope that we have succeeded by giving you the full details and information. To follow all our news, you can subscribe to the alerts system or to one of our different systems to provide you with all that is new.