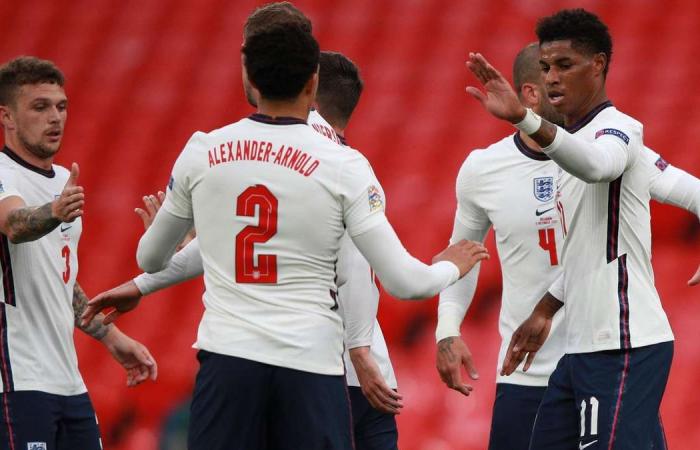 Thank you for your reading and interest in the news Kyle Walker 9, Mason Mount 6; Romelu Lukaku 8, Kevin de Bruyne 8: England v Belgium player ratings - in pictures and now with details

Kyle Walker - 9: The Manchester City defender was ubiquitous on a night he won his 50th cap and his manager's trust again. AFP

Harry Maguire - 7: He and Dier both struggled against Lukaku's physicality early on but both improved markedly in the second half. AFP

Trent Alexander-Arnold - 6: A subdued performance but provided the only quality ball in open play that led to Mount's winner. Reuters

Declan Rice - 7: Struggled to get the better of the wily Witsel in the first half but dominated the Dortmund man in the second. Reuters

Jordan Henderson - 6: Went down theatrically to win the penalty that levelled the tie. AFP

Kieran Trippier - 7: Looked a square peg in a round hole on the left side of England's defence. Grew into the game though and made some timely interventions. AFP

Mason Mount - 6: A surprise choice ahead of Jack Grealish and did little to justify it before his deflected effort decided the match. Reuters

Marcus Rashford - 6: Another who had a subdued night but banged in a penalty that turned the match in England's favour. AFP

Dominic Calvert-Lewin - 7: Some lovely hold up play with England under the cosh in the first half but precious little to feed on in front of goal. AFP

SUBS: Harry Kane (on for Calvert-Lewin) - 5: Took the sting out of the game drawing fouls off the Belgium defenders but missed an absolute sitter. EPA

Kalvin Phillips (on for Henderson) - 6: The Leeds man does not look out of place on the international stage. EPA

Reece James (on for Alexander-Arnold) - 6: Snapped at the heels of Carrasco and Castagne. AFP

Jadon Sancho (on for Mount) - NA: No time to make an impact. AFP

BELGIUM RATINGS: Simon Mignolet - 6: Only playing due a raft of injuries but the Club Bruge man could do nothing about either England goal. AFP

Toby Alderweireld - 7: Hardly troubled and can feel unlucky that Mount's shot looped up off his attempted block for the winner. Reuters

Jason Denayer - 7: Comfortably dealt with most things thrown at him but was caught on his heels as substitute Kane nearly connected with a corner. AFP

Thomas Meunier - 7: Will probably be one of the few players anywhere cursing the absence of VAR after giving away a soft penalty for England's equaliser. Reuters

Youri Tielemans - 6: The 23-year-old will be a linchpin of this Belgium side for years to come but his manager will be concerned how he and midfield partner Witsel wilted once England had the wind in their sails. AFP

Axel Witsel - 6: Looked pure silk until Rice nailed him with a crunching tackle just before half time. Went missing there after. Reuters

Timothy Castagne - 7: Showed why Leicester were prepared to pay big money to bring him to the Premier League. Will be kicking himself for wandering offside that saw Carrasco's early strike ruled out though. AFP

Yannick Carrasco - 8: Belgium's brightest player as they battered England in the first half and was unlucky not to get on the scoresheet before being replaced late on. Reuters

Kevin de Bruyne - 8: The pass that picked out Carrasco in the second half was precision personified. It deserved a better finish. Reuters

Romelu Lukaku - 8: The Inter Milan striker was brute force and subtle flicks in the first half before being snuffed out by England's back three in the second. Reuters

SUBS: Yari Verschaeren (on for De Bruyne) - 5: The 19-year old came on to win a sixth Belgium cap saw little of the ball. Reuters

These were the details of the news Kyle Walker 9, Mason Mount 6; Romelu Lukaku 8, Kevin de Bruyne 8: England v Belgium player ratings - in pictures for this day. We hope that we have succeeded by giving you the full details and information. To follow all our news, you can subscribe to the alerts system or to one of our different systems to provide you with all that is new.