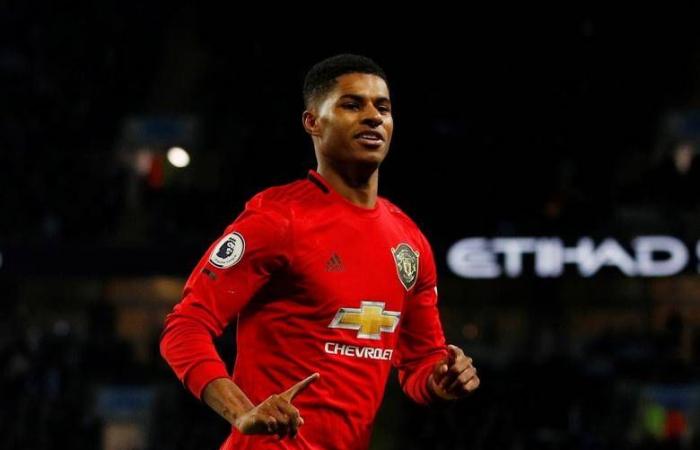 Aden - Yasmine El Tohamy - The 22-year-old forced a government U-turn over its free school meals policy and is made an MBE.

Manchester United footballer Marcus Rashford was honoured by Queen Elizabeth II on Friday in recognition of his campaign to feed vulnerable children, alongside hundreds of key workers who helped in the fight against the coronavirus.

The England international is one of the highest-profile figures in the monarch's birthday honours list, which was postponed from June in order to include frontline health workers and others in the Covid-19 effort.

The 22-year-old forced a government U-turn over its free school meals policy, ensuring children in need would receive meal vouchers throughout the summer months, and has formed a child food poverty task force.

Rashford, who has been made a Member of the Order of the British Empire (MBE), said he was "honoured and humbled" to receive the award.

"Let's stand together in saying that no children in the UK should be going to bed hungry," he said. "As I have said many times before, no matter your feeling or opinion, not having access to food is never the child's fault."

Fitness expert Joe Wicks, whose daily online exercise sessions drew millions of viewers across the globe, is also being made an MBE.

Rapper Lady Leshurr is being awarded the British Empire Medal after releasing a coronavirus-related song this year reminding people to wash their hands.

Of those who have been honoured, nearly three-quarters have worked for their local communities, reflecting the huge voluntary effort in response to the coronavirus pandemic.

"This year's honours recipients are a testament to the sort of country we are -- caring, compassionate and resolute in the face of a global pandemic," said Prime Minister Boris Johnson.

"The hard work and dedication of these local, often unsung heroes has helped carry us through. I congratulate them all."

More than 42,000 people have died in the outbreak in Britain -- the worst toll in Europe -- and concern is currently mounting about rising infection numbers.

The honours list includes 100-year-old Dabirul Islam Choudhury, was made an Officer of the Order of the British Empire (OBE) after he raised £420,000 (Dh2 million) for Covid-19 relief while fasting during Ramadan.

Several experts working in the science, health and pharmaceutical fields have also been recognised for their efforts, including Emma Walmsley, chief executive of pharmaceutical giant GlaxoSmithKline, who becomes a dame.

"I'm humbled to receive this honour," said Walmsley. "It is a real testament to the many outstanding people we have at GSK and the work we do for patients and people here in the UK and around the world."

Ex-Wales rugby union coach Warren Gatland was made a Commander of the Order of the British Empire (CBE) for services to the sport in Wales while former British and Irish Lions captain Gareth Thomas has been awarded a CBE for services to sport and health.

These were the details of the news Manchester United star Marcus Rashford honoured by Queen Elizabeth II for this day. We hope that we have succeeded by giving you the full details and information. To follow all our news, you can subscribe to the alerts system or to one of our different systems to provide you with all that is new.