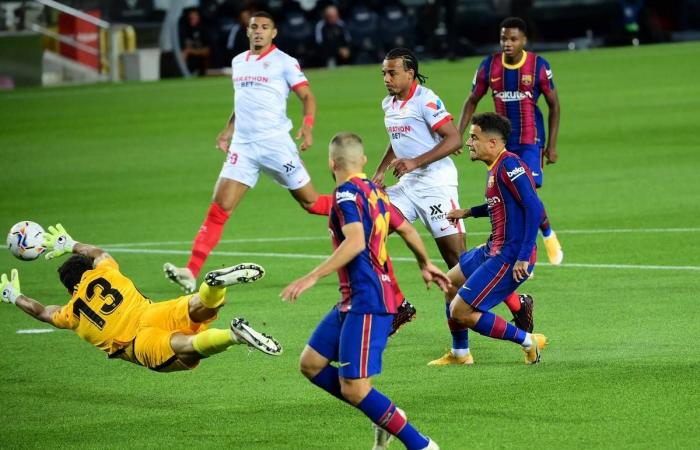 Sevilla's superb defense held Barcelona to a 1-1 draw at Camp Nou on Sunday as Ronald Koeman's team dropped its first points in the Spanish league.

Striker Luuk de Jong put Sevilla ahead in the eighth minute when he blasted home a loose ball that fell to him in the box after a corner. It was the first league goal conceded by Barcelona this season.

Barcelona hit back two minutes later. Lionel Messi drifted back into midfield and lobbed forward a pass to meet Jordi Alba's run from the left side. Jesus Navas tried to intercept, only to knock it into the path of Coutinho who fired it home.

Sevilla's defense clogged up the middle of the field the rest of the way. Holding midfielder Fernando and centerback Jules Kounde deactivated the playmaking of Messi and Coutinho, while also stopping incursions by Ansu Fati from the left flank.

"We had a game plan that we wanted to carry out," coach Julen Lopetegui said. "They leveled quickly, but we got right back in the match and had chances to do more damage that we couldn't convert."
Lopetegui's well-coached side has kept up its excellent team play from last season when it won the Europa League and finished the league in fourth place.

"Today was a difficult, complicated match. We knew it would be," Coutinho said. "They had a lot of players in the middle of the defense and it made it difficult. We will have to find ways to fix that . But this has just started."

Barcelona's midfield pair of Frenkie de Jong and Sergio Busquets were pressured into passing errors, and Ronald Araujo had to stop a solo attack by Lucas Ocampos midway through the first half after a bad pass by Busquets was picked off.

Both coaches saw their attacks stall in the second half and substituted two forwards each with half an hour left. Koeman changed Fati and Antoine Griezmann for newcomers Francisco Trincao and Pedro "Pedri" Gonzalez, while Lopetegui sent on Munir El Haddadi and Youssef En-Nesyri for Ocampos and Jesus "Suso" Fernandez.

En-Nesyri made a quick impact, breaking down the left and putting in a short cross that Araujo cleared onto the crossbar in what was almost an own-goal in the 64th.

Araujo started for Barcelona in place of the suspended Clement Lenglet. The rarely used 21-year-old Uruguayan played well in the second half of last round's 3-0 win at Celta Vigo after Lenglet was sent off with two bookings before halftime.

Both teams have two wins and a draw this season.
Barcelona had won all its matches - including three preseason games - since Koeman took over following its humiliating 8-2 defeat to Bayern Munich in the final game of last season.
"We lost more balls than we usually do ... but one week, three matches and seven points, we have to be happy," Koeman said about his team's start.

These were the details of the news Sevilla suffocates Barcelona in 1-1 draw at Camp Nou for this day. We hope that we have succeeded by giving you the full details and information. To follow all our news, you can subscribe to the alerts system or to one of our different systems to provide you with all that is new.