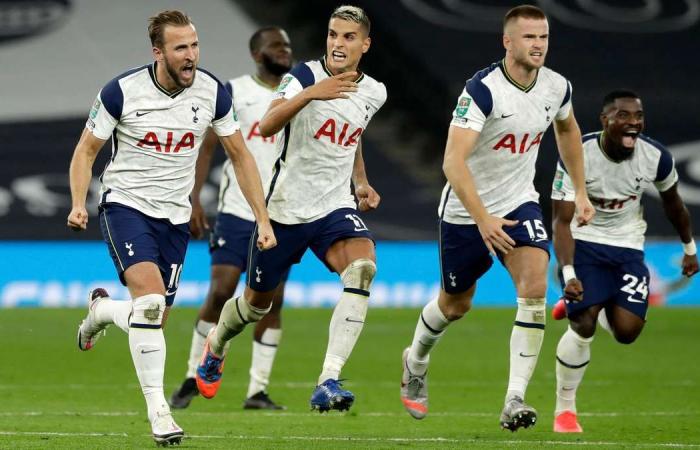 Thank you for your reading and interest in the news Erik Lamela 8, Sergio Reguilon 6; Olivier Giroud 4: Tottenham v Chelsea player ratings and now with details

Hind Al Soulia - Riyadh - SPURS RATINGS: Hugo Lloris - 7: No chance with Werner goal and denied the German a second with a good stop in second half. No saves in shootout but Spurs still ran out winners. PA

Toby Alderweireld - 7: A rock at the back for Spurs alongside Dier. The Belgian made crucial challenges on the ground and in the air. PA

Eric Dier - 7: Gave Spurs a first-half scare when seemed to have picked up a knee injury but recovered to help mark Giroud out the game. Gave them another fright when he suddenly sprinted off the pitch in the second half – for a toilet break – leaving his team a man down and Mourinho charging down the tunnel after him. AP

Gedson Fernandes - 6: Rare start for Portuguese midfielder. Felt he should have had first-half penalty when Mendy and Zouma combined to deny him a shot at goal. Rightly turned down. Hooked just after the hour mark. PA

Tanguy Ndombele - 6: Will have annoyed his manager when he failed to close down an Azpilicueta shot just before the hour mark. A decent performance, particularly in second half, but you still should be getting more for your £54 million. PA

Moussa Sissoko - 7: Immense in the middle for Spurs, does so much work off the ball and is understandably a key player for Mourinho. AFP

Sergio Reguilon - 6: Debutant was badly at fault for Chelsea’s goal when he lost possession in his own half and was then left for dead on the deck by Azpilicueta, who eased past his desperate diving challenge before setting up Werner. Should have done better with chance early in second half but side-foot finish easily stopped by Mendy. Cross set up Lamela’s equaliser. A mixed bag. EPA

Erik Lamela - 8: Started up front alongside Bergwijn, in absence of Kane and Son, produced fine turn and low shot in first half but was denied by the boot of Mendy. Put in a shift and deserved his late goal – as did Spurs. Reuters

SUBS: Pierre-Emile Hojbjerg - (On for Fernandes 63’) 7: Slotted straight into midfield as team were dominating. Reuters

Harry Kane - (On for Tanganga 70’) 6: Early opportunity when he skipped past Tomori but could only blaze chance over bar. A player you want on the pitch for a shootout when he coolly slotted home. AP

CHELSEA RATINGS: Edouard Mendy - 6: Debut for the big-money buy from Rennes saved well from Lamela after 35 minutes and made regulation stop from Reguillion just after break. Nervous moments on crosses that should concern Chelsea. EPA

Fikayo Tomori - 7: Vital tackle on Bergwijn to deny Dutchman shot early in second half. Chelsea’s defence has rightly been criticised but played well alongside Zouma. Reuters

Ben Chilwell - 7: Another debutant for Chelsea, the £45m signing from Leicester found plenty of space down the left in first half but saw less attacking opportunities as the match wore on. Solid start and much-needed game time. AFP

Jorginho - 7: Italian midfielder was his usual neat and tidy self, providing quality distribution and is a fulcrum for Chelsea. Hop, skip and goal in shootout. Reuters

Mateo Kovacic - 6: Booked in first half for cynical trip to deny Lamela run on goal. Lost midfield battle after the break as Spurs took charge. AFP

Callum Hudson-Odoi - 8: A constant menace down the right and helped give Reguillon a tough opening 45 minutes in English football. Fired first-half chance straight at Lloris. Smashed shot over the bar after break when teammates were better placed. AP

Mason Mount - 6: Pushed and probed without any game-changing moment - until the bitter finale. Should have done much better in second half when Chelsea were two-on-one but gifted possession straight to Spurs. Miss in shootout sent Chelsea crashing out. EPA

Timo Werner - 7: Cracked home quality low finish to put Chelsea in front after 19 minutes. Quiet after the break until a 70th-minute shot was saved by Lloris. AFP

Olivier Giroud - 4: Disappointing night for the French striker. Could have done with more support at times as won a few challenges in the air and had no one to pick up the loose ball, but generally offered no threat to Spurs. EPA

SUBS: Emerson - (On for Chilwell 66’) 5: Awful defending for Lamela’s late leveler. Redeemed himself by scoring in shootout.

N’golo Kante - (On for Kovacic 70’) 6: Brought on to try and stem the Tottenham tide as Mourinho’s side were dominating all over the park. Getty

These were the details of the news Erik Lamela 8, Sergio Reguilon 6; Olivier Giroud 4: Tottenham v Chelsea player ratings for this day. We hope that we have succeeded by giving you the full details and information. To follow all our news, you can subscribe to the alerts system or to one of our different systems to provide you with all that is new.