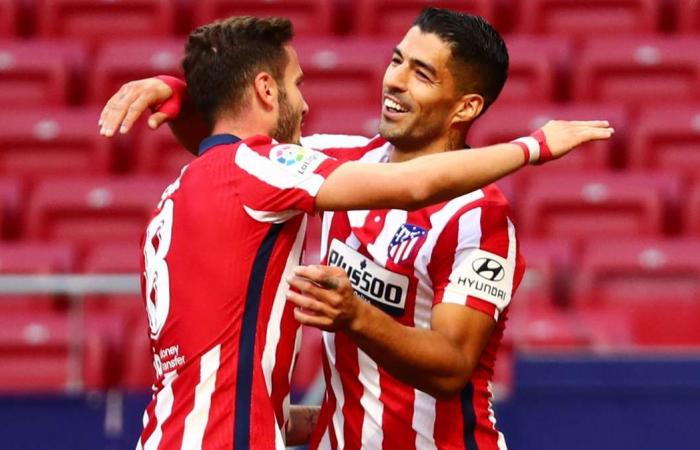 Hind Al Soulia - Riyadh - Luis Suarez said he is embracing his new challenge at Atletico Madrid and the Uruguayan striker started in fine style, scoring twice and assisting another in a stunning cameo off the bench.

Suarez, 33, was forced out of Barcelona by new manager Ronald Koeman after six years and 198 goals for the Catalans, placing him third in the club's all-time leading goalscorers standings.

The manner of Suarez's exit clearly angered Lionel Messi, who stated his friend and strike partner "did not deserve for them to throw you out like they did. But the truth is that at this stage nothing surprises me any more.”

Suarez was visibly upset as he exited the Barcelona training ground for the final time last week, but the Uruguay international was back to business with his new club on Sunday with two goals and an assist for Marcos Llorente in just 20 minutes, helping Atletico crush Granada 6-1 in their first La Liga game of the season.

"Barca reached a point where they decided they needed a change and some fresh air, so it was important to accept that and change club," Suarez told Spanish network Movistar.

"For a player sometimes it's important to make a change and I've come to club who have given me a spectacular welcome. You can sense that there is a very good atmosphere around the club and today we saw it on the pitch."

Suarez came on in the 70th minute with his side three goals up but wasted no time in making his mark on the game, laying on a pass for Marcos Llorente to score the fourth goal of the game.

He then headed home a cross from Llorente and rounded off an almost perfect day for Atletico by striking again in stoppage time.

"The team were in a good place when I came on and I just wanted to kill the game off," Suarez said.

"I'm very happy with my debut and for the three points. When you make your debut and help the team with goals you're always going to be happy."

Atletico manager Diego Simeone highlighted Suarez's work off the ball as well as his goals.

"I'm not just pleased with his two goals but also his assist, his movement and his runs," said Simeone.

"His arrival will generate a lot of internal competition and if all 23 players in the squad accept the minutes they are given then I'm sure we'll compete well.

"The arrival of an important player like Suarez will always improve the team but we were already working very well."

These were the details of the news Luis Suarez reminds Barcelona what they're missing with stunning debut for Atletico Madrid for this day. We hope that we have succeeded by giving you the full details and information. To follow all our news, you can subscribe to the alerts system or to one of our different systems to provide you with all that is new.