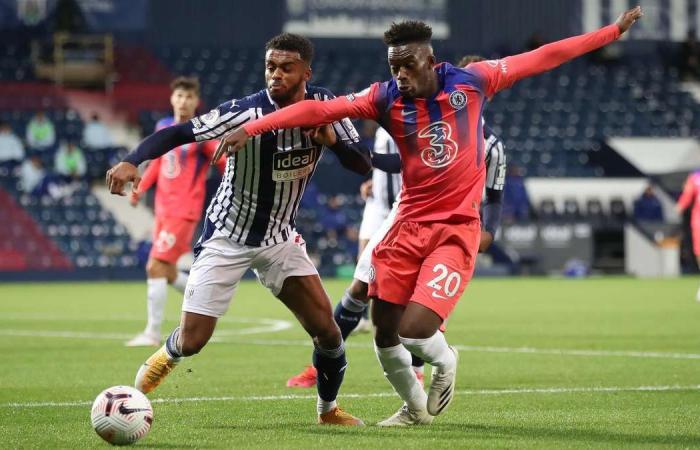 Thank you for your reading and interest in the news Callum Hudson-Odoi 8, Callum Robinson 8, Marcos Alonso 2: West Brom v Chelsea player ratings and now with details

Darnell Furlong – 7. Lovely headed flick-on for Bartley’s goal and stood up to Chelsea’s wide attacks in the first half. Hudson-Odoi made his task tougher in the second 45. AP

Semi Ajayi - 6. Burst of pace past Alonso prompted a booking for the Chelsea defender, who did not make it past half-time. Stood firm against Abraham's strength. AP

Dara O'Shea – 6. Dealt well with Chelsea’s onslaught up until the visitors found a breakthrough. Getty Images

Conor Townsend – 6. Pegged back and couldn’t get forward in his wing-back role as West Brom ceded most of the possession. Reuters

Matheus Pereira – 7. Fine pass for Johnstone’s opener and produced a delightful flick which, if there was an award, would win touch of the season. A good performance. PA

Jake Livermore – 7. Provided plenty of bite in midfield during a first half when Chelsea failed to create any rhythm. PA

Romaine Sawyers – 6. A quiet game as Chelsea kept the majority of the ball. Reuters

Grady Diangana – 6. A player with plenty of skill and talent but neither were on full display on this occasion. Getty Images

Callum Robinson – 8. Well taken finish to open the scoring for West Brom before pouncing on a Silva mistake to double his side’s lead. AP

CHELSEA RATINGS: Willy Caballero – 6. Not at fault for any of West Brom’s goals but hardly inspires confidence. The sooner Edouard Mendy is ready to start, the better for Chelsea. EPA

Reece James – 6. Got forward all game and provided crosses aplenty. Caught out defensively at times and was partly at fault for West Brom’s third. Reuters

Thiago Silva – 5. Improved as the game went on but his miss control for Robinson’s second was a critical mistake. Not the Premier League debut he would’ve hoped for. EPA

Marcos Alonso – 2. Nightmare display. Weak header led to Robinson’s first goal and minutes later was booked. Set the tone for a disastrous 45 minutes before getting hooked. Apparently, the pitchside photographers didn’t believe Alonso’s performance even warranted a photo, so here he is against Liverpool. PA

N’Golo Kante – 6. As expected, plenty of energy from the Frenchman but struggled to impose himself on the game. Getty Images

Mateo Kovacic – 5. Uncharacteristically off the pace. Replaced at half time. Reuters

Mason Mount – 8. Great movement and finish to score Chelsea’s first to offer his side a lifeline. His low shot late on led to Abraham’s equaliser. After an anonymous first half, vastly improved after the break. EPA

Kai Havertz – 7. Coming off the back of his League Cup hat-trick, Havertz was Chelsea’s most effective midfield player during their second half fightback. A perfectly weighted one-touch pass to set up Hudson-Odoi’s finish. Getty Images

Tammy Abraham – 6. Granted, he scored the vital equaliser by tapping into an empty net, but he rarely posed much of a threat for the previous 94 minutes. EPA

Timo Werner – 5. Couldn’t make anything happen, although not through lack of trying. Saw a first half effort clip the crossbar. A frustrating evening for the German. Getty Images

SUBS: Cesar Azpilicueta (45’) – 7. Compared to the man he replaced at left-back, the Chelsea captain looked like a prime Maldini. In reality, it was a solid performance and the Spaniard brought some much-needed composure to a shambolic backline. PA

Callum Hudson-Odoi (45’) – 8. The winger was a constant menace on the left, creating chances, beating defenders, and scoring a fine goal for Chelsea’s second. Played a vital role in the fightback. EPA

Olivier Giroud (73’) – 5. The French target man didn’t impact the game during his brief spell on the pitch. EPA

These were the details of the news Callum Hudson-Odoi 8, Callum Robinson 8, Marcos Alonso 2: West Brom v Chelsea player ratings for this day. We hope that we have succeeded by giving you the full details and information. To follow all our news, you can subscribe to the alerts system or to one of our different systems to provide you with all that is new.