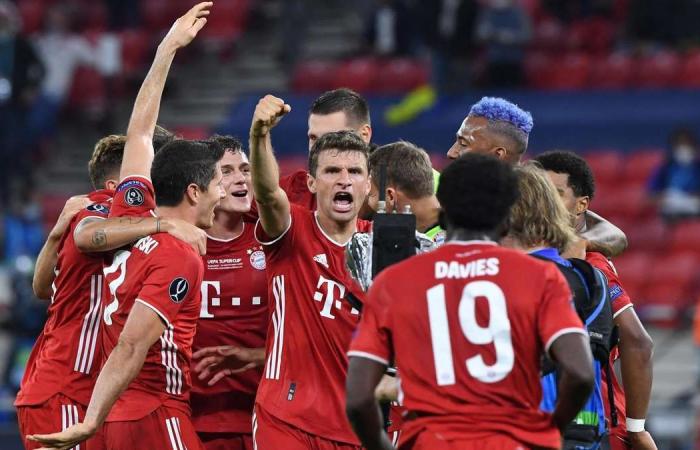 Thank you for your reading and interest in the news More than 15,000 watch Bayern Munich lift Uefa Super Cup in Budapest - in pictures and now with details

epa08695152 Youssef En-Nesyri of Sevilla in action during the UEFA Super Cup final between Bayern Munich and Sevilla at the Puskas Arena in Budapest, Hungary, 24 September 2020. EPA/Bernadett Szabo / POOL

Fans of Bayern Munich after their team won the Super Cup final in Budapest, Hungary. EPA

Javi Martinez of Bayern Munich celebrates with teammates after scoring the second goal against Sevilla at the Puskas Arena in Budapest. EPA

Bayern Munich secured their fourth title of the season with victory in the Uefa Super Cup final. EPA

Sevilla fans during the final against Bayern Munich. More than 15,000 fans attended the match. EPA

Youssef En-Nesyri, foreground, of Sevilla after the defeat in Budapest. EPA

Youssef En-Nesyri, left, and Sergi Gomez of Sevilla after losing the final. EPA

These were the details of the news More than 15,000 watch Bayern Munich lift Uefa Super Cup in Budapest - in pictures for this day. We hope that we have succeeded by giving you the full details and information. To follow all our news, you can subscribe to the alerts system or to one of our different systems to provide you with all that is new.