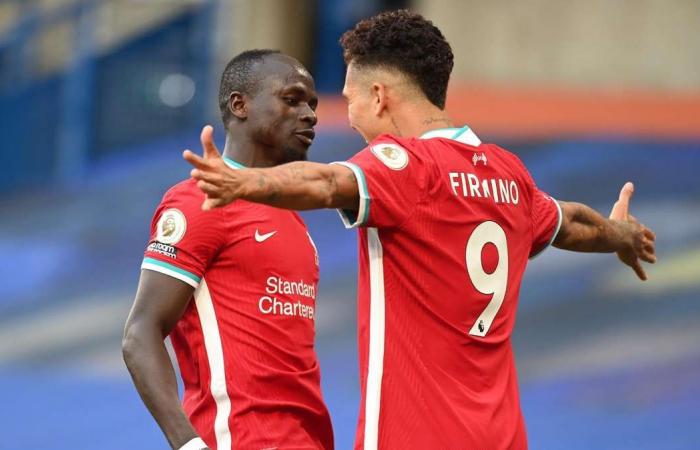 Hind Al Soulia - Riyadh - CHELSEA RATINGS: Kepa Arrizabalaga – 4. If Edouard Mendy is arriving from Rennes, the Spaniard did himself no favours in convincing Frank Lampard he should remain Chelsea’s No 1. Another silly mistake by passing straight to Mane for Liverpool’s second while also making some sold saves. Sums up much of his Chelsea career. AFP

Reece James – 5. Tough night, especially after Chelsea went down to 10-men. Did ok for most of the match but lost Mane for Liverpool’s opening goal. AP

Andreas Christensen – 2. Cost his team big when they were right in the contest, his sending off for pulling down Sadio Mane changed the game. AP Photo

Kurt Zouma – 7. Was a rock in Chelsea’s defence. Without his presence, Liverpool could’ve created a lot more chances. Reuters

Marcos Alonso – 5. Never easy going up against Salah and his defensive frailties were on show. Impact in attack was limited after Chelsea tried to contain Liverpool. Reuters

N’Golo Kante – 6. A trademark covered-every-blade-of-grass display by the French midfielder, but his influence faded after the red card. AP

Jorginho – 5. Held his own in midfield prior to Christensen’s red card but like Kante, faded in the second half. His penalty could’ve given Chelsea a lifeline but was a weak effort. PA

Mateo Kovacic – 6. Same story for Kovacic, who provided plenty of drive and energy up until Chelsea were reduced to 10 men. PA

Kai Havertz – 5. Glimpses of his class early on but ultimately a frustrating outing for the German. Made way at halftime for Tomori after Christensen’s red. AP Photo

Timo Werner – 6. Looked early on like he was going to cause Liverpool plenty of problems, but as Chelsea retreated, he was starved of support. Scuffed an effort wide that would have given his team the lead but also won the penalty Jorginho missed. AP Photo

Mason Mount – 5. Flashed a dipping effort over the bar and looked dangerous on the ball but largely ineffectual. AP

SUBS: Fikayo Tomori (45’) – 6. Sent into the fray as Chelsea were reduced to 10 men. Had a solid game in the circumstances. AP

LIVERPOOL RATINGS: Alisson – 8. Penalty saved, clean sheet away to a top four side: can’t say fairer than that. PA

Trent Alexander-Arnold – 6. A quiet performance by his usual sky-high standards but solid enough both in defence and attack. EPA

Fabinho – 8. Played out of position as a makeshift centre-back, this could have been an uncomfortable night for the Brazilian midfielder. Instead, he won all of his duels and looked at ease in the back line. AP

Virgil van Dijk – 8. A typical classy display from the Dutchman. Soaked up the few counters Chelsea launched with ease before enjoying a comfortable second half. AP

Andrew Robertson – 6. Similar to Alexander-Arnold, put in a good display without creating his usual litany of chances. AP

Naby Keita – 6. Yet another decent display without ever effecting the game. Klopp will want more from the Guinean midfielder. AP

Jordan Henderson – 7. Withdrawn at halftime due to injury but produced the defining moment of the match after his superb long ball forward to Mane led to Christensen’s dismissal. EPA

Georginio Wijnaldum – 8. Days after Thiago’s arrival led to suggestions the Dutchman’s time at Liverpool could be ending, he produced a fine all-round performance. The pick of Liverpool’s midfielders. AP

Mohamed Salah – 6. Usually loves to terrorise his former club but it was a subdued display from the Egyptian forward. EPA

Roberto Firmino – 7. Did what he does best by setting up Mane’s opener with a pinpoint cross. A lively presence throughout. AP

Sadio Mane – 9. Was the central figure in the game’s three biggest moments. It was Mane who was hauled down in Christensen’s red card moment, before he scored both of Liverpool’s goals soon after the interval. A gentle early season reminder of the Senegalese forward’s brilliance. EPA

SUBS: Thiago Alcantara (45’) – 7. Liverpool fans would have been excited to see their new midfielder in action and it was an encouraging first appearance, although he committed the foul on Werner for Chelsea’s penalty. EPA

These were the details of the news Sadio Mane 9, Thiago 7; Timo Werner 6, Kai Havertz hooked: Chelsea v Liverpool player ratings for this day. We hope that we have succeeded by giving you the full details and information. To follow all our news, you can subscribe to the alerts system or to one of our different systems to provide you with all that is new.

PREV A shocking statement by Khaled Al-Ghandour after the victory of Zamalek...
NEXT All eyes in Spain on Eden Hazard: Zidane plays poker at...