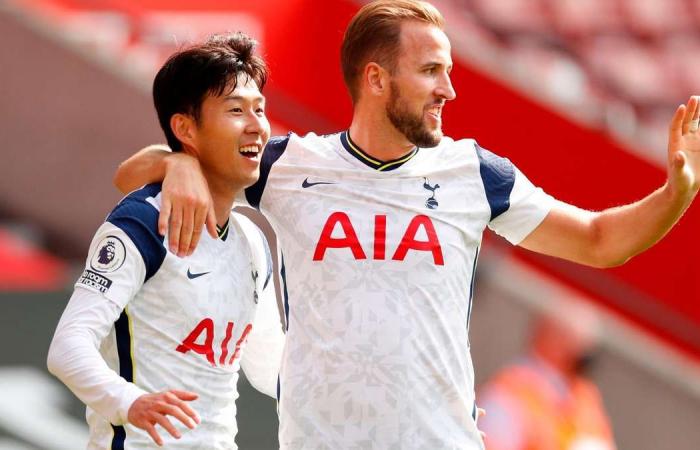 Thank you for your reading and interest in the news Son Heung-min 9, Harry Kane 9; Jack Stephens 4: Southampton v Tottenham player ratings and now with details

Hind Al Soulia - Riyadh - SOUTHAMPTON RATINGS: Alex McCarthy – 5: Stuttered when he should’ve come for Kane’s through ball and hesitation allowed Son to equalise. From there, constantly left too exposed by his defence. Reuters

Kyle Walker-Peters – 6: Assist against his former club with long pass in behind to Ings. Initially handled Son well, but was a culpable component in his side’s horrendous high line. EPA

Jack Stephens – 4: A day to forget. Looked slow and cumbersome when pushing up and unable to recover. Booked for foul on Lo Celso. Daydreaming for Spurs’ final goal. Reuters

Jan Bednarek - 4: Ditto to his partner at centre-back. Run ragged in the second half, leaving acres of space in behind. Couldn't handle Kane as striker dropped deep. AFP

Ryan Bertrand – 4: Completed a botched back four for the hosts. Harshly booked just before half time, then afternoon careered downhill from there. Reuters

Stuart Armstrong - 5: Quiet first half, had a half-chance at start of second but was largely ineffectual. Was hooked on 68 minutes as home side fell apart. Reuters

James Ward-Prowse – 5: Controlled midfield in the first half, disappeared in the second, especially once buffer in Romeu departed. That said, as captain he needed to offer more. AFP

Oriol Romeu - 4: Had decency to wait all of five minutes to get his customary yellow card. Taken off 10 minutes into second half knowing he was on final warning from the referee. All things considered, a reprieve. AFP

Moussa Djenepo – 7: Created havoc whenever ran at Doherty on the left, struck a post in the first half. Was involved in award of team’s late penalty. AFP

Danny Ings – 8: ‘So, you want to buy me, Jose?’ Days after links to a Spurs transfer, scored brilliant goal with expert control and finish, then converted penalty at the death. AFP

Che Adams – 6: Had two very presentable opportunities, one in either half, but shot both straight at Lloris. Booked in first half, subbed in final 10 minutes. Reuters

SUBS: Will Smallbone (on for Romeu) - 5: On in 55th minute, just as the match was beginning to turn against his side. Probably would’ve preferred keeping on the tracksuit. Reuters

Nathan Tella (on for Armstrong) - 5: Introduced with 22 minutes left, and largely ineffectual for all 22 of those – although he was hardly alone. AFP

Shane Long (on for Adams) - 5: Irishman brought on for final 10 minutes, and didn’t have a chance to impact the match - which to be fair he struggles to do anyway. Result already secure. Reuters

TOTTENHAM RATINGS: Hugo Lloris – 6: The usual from the Frenchman - brilliant close-range save early on, then some rushes of blood to the head and a dodgy kick or two. All in a day’s work. Reuters

Matt Doherty – 7: Denied an early assist by Son’s offside, and incredibly unlucky to give away a spot-kick for handball in closing stages. Nothing overly notable in between. Reuters

Davinson Sanchez - 6: Relied on his pace to get out of trouble a couple of times, but was characteristically shaky in possession. There’s a quality defender in there, sometimes. Reuters

Pierre-Emile Hojbjerg - 7: Back at his former home, would've “enjoyed” a lovely welcome back from Romeu, which looked nasty. Patrolled midfield after the interval. EPA

Harry Winks - 6: The England international was less Iniesta and more Indifferent. Has struggled since reported illness limited his pre-season. Improved in second half, though. Reuters

Tanguy Ndombele – 7: The conundrum continues. Off pace for most of first half, then moment of genuine magic helped team equalise. Subbed at half-time. Eat, sleep, repeat. Reuters

Lucas Moura – 6: Offside when set up Kane on 26 minutes, then was his usual busy self. However, didn’t create much at all, and was subbed on the hour with an apparent knock. EPA

Son Heung-min 9: Four goals, two with his left, two with his right. Blistering once breaking lines, clinical in front of goal. That’s 10 in 11 against Southampton. Bale who? AFP

Harry Kane – 9: Obviously upset by having two goals disallowed, set about creating instead. All four assists to Son displayed he’s way more than a world-class centre-forward. Still, got tap-in for Spurs’ fifth. EPA

SUBS: Giovani Lo Celso (on for Ndombele) - 8: On at half-time and made instant impact in pass to Kane to set up Spurs’ second. Clever and compact, and booked late on for good measure. So a typical display. Reuters

Erik Lamela (on for Moura) - 7: Introduced for Moura on the hour, helped Spurs run away from their rivals with some smart passing and intelligent running. His saved shot teed up Kane for No 5. AFP

Steven Bergwijn (on for Kane) – N/A: Brought on for Kane with four minutes left. Would've enjoyed the opportunity to stretch legs ahead of frantic period for his team. AFP

These were the details of the news Son Heung-min 9, Harry Kane 9; Jack Stephens 4: Southampton v Tottenham player ratings for this day. We hope that we have succeeded by giving you the full details and information. To follow all our news, you can subscribe to the alerts system or to one of our different systems to provide you with all that is new.