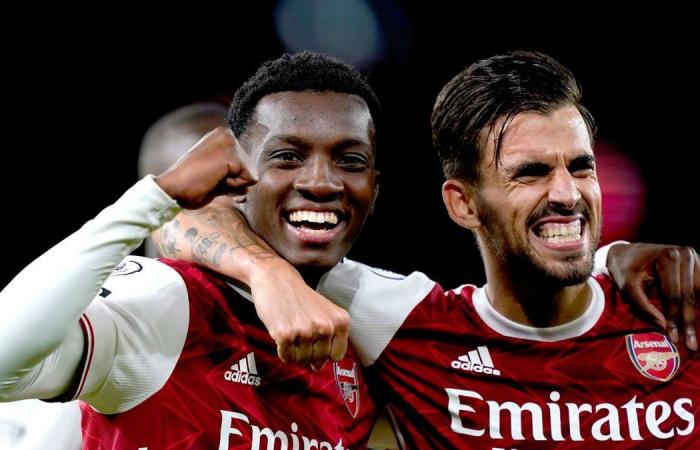 Thank you for your reading and interest in the news Alexandre Lacazette 8, Willian 5; Pablo Fornals 5 – Arsenal v West Ham player ratings and now with details

Hind Al Soulia - Riyadh - ARSENAL RATINGS: Bernd Leno - 7, The German put in a decisive performance, saving well from Jarrod Bowen in the second half, showing why he was kept instead of Emiliano Martinez. AP

Rob Holding - 5, His battle with Michail Antonio was an intriguing one, but he lost the Hammers man for his goal. AFP

Gabriel - 7, Showed he can deal with the Premier League’s physicality, providing a solid performance at the heart of Arsenal’s defence. Made some crucial blocks and showed excellent positional awareness to keep the Hammers at bay. Getty

Sead Kolasinac - 5, Came in at short notice and struggled at times, though he did have promising moments and offered good support on the left-hand side. EPA

Hector Bellerin - 7, His duel with Arthur Masuaku was a good one to watch, the Spaniard played some intelligent passes. Getty

Dani Ceballos - 7, Struggled to control the play for most of the game, though he did improve in the second half after a profligate first 45 minutes. He also had the last laugh when he set up Eddie Nketiah for the winner. EPA

Granit Xhaka - 5, The Swiss midfielder was pressed throughout and some of his passing was very poor, but he didn’t cost his team in the end, even if that did involve a little bit of luck at times. EPA

Bukayo Saka - 8, Had a say in both of Arsenal’s goals and put in a good defensive shift to help out Kolasinac. A lot of the Gunners’ play went through him. EPA

Willian - 5, Struggled to make his mark on the game after starting well and linking with Lacazette, but that was partly down to his teammates not being on his wavelength at times. PA

Alexandre Lacazette - 8, Sometimes cumbersome in possession, he did link up the play and helped create chances even when Gunners weren’t on top. Ultimately, took his headed goal well. EPA

Pierre-Emerick Aubameyang - 7, Was often anonymous, but made his mark on proceedings with a classy assist for Lacazette. AP

SUBS: Nicolas Pepe (Willian, 64’) - 5, Made some threatening runs, but his distribution didn’t cause many problems. Reuters

Eddie Nketiah (Lacazette, 77’) –7, Didn’t have much of an impact in general play but scored the winner. Job done. PA

WEST HAM RATINGS: Lukasz Fabianski - 6, Didn’t have a real chance of stopping either of Arsenal’s goals, but had little to do other than pick the ball out of the net. Getty

Issa Diop - 6, His trailing leg kept Aubameyang onside for the opener, but he showed an improvement from the Newcastle game. EPA

Angelo Ogbonna - 7, He can feel hard-done-by after this result, having put in a strong defensive performance and generally getting the best of Lacazette. AFP

Aaron Cresswell - 6, Lost his concentration at times and was guilty of losing Lacazette for Arsenal’s second, but he was largely solid, especially in the second half. EPA

Arthur Masuaku - 7, Used his added attacking license to cause a real threat going forward, this formation definitely suits him. EPA

Jarrod Bowen - 6, Very busy and played a large role in Antonio’s goal. However, there were times he was a bit too selfish, and he was guilty of playing with his head down. PA

Tomas Soucek - 7, Was quiet in the first half, but caused an aerial threat in the second and helped Rice largely win the midfield battle. Reuters

Declan Rice - 7, Really solid performance for large parts of the game, making a series of interventions in the middle, even if he did fail to track Lacazette for the home side’s opener. Reuters

Pablo Fornals - 5, He struggled out wide, rarely impacting in any meaningful way. He looked more dangerous when he drifted inside, which appears to be a more natural position for him. Getty

Michail Antonio - 8, Put in a spirited performance and was rewarded with a goal and also hit the bar with a header. AP

SUBS: Andriy Yarmolenko (Bowen, 83’) - 4, Failed to track Ceballos’ run for the winner and didn’t provide much threat of his own. Getty

Sebastien Haller (Fornals, 87) - N/A, Given no time to make an impact, despite having scored twice earlier in the week. Getty

These were the details of the news Alexandre Lacazette 8, Willian 5; Pablo Fornals 5 – Arsenal v West Ham player ratings for this day. We hope that we have succeeded by giving you the full details and information. To follow all our news, you can subscribe to the alerts system or to one of our different systems to provide you with all that is new.