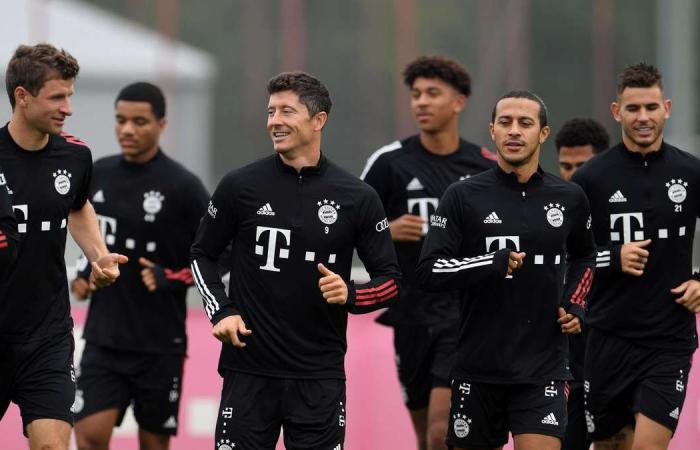 Hind Al Soulia - Riyadh - Barely had Hansi Flick packed away his Champions League medal when he started plotting his next fixture. The Bayern Munich manager had a clear idea of how it should look: even, competitive, exceptional footballers in every position.

The game he had in mind would take place at the club’s training headquarters, and, ideally, a casual observer would scarcely notice a difference in standard between the two sides.

The game he envisaged would be between Bayern A and Bayern B – teams who might very well claim to be the two strongest XIs in the Bundesliga.

Keeping up with Bayern, who kick-off the 2020/21 German league season on Friday against Schalke 04, is a wearying task. And for Borussia Dortmund, the next best, and the other 16 clubs of the Bundesliga, the strength in depth of the new European champions looks ominous.

“We need to be smart with the heavy schedule ahead,” said Robert Lewandowski, the Bayern striker whose 34 league goals last season set a modern high for expert marksmanship. Lewandowski expects to be rested more often than usual because of the hectic calendar, and knows his coach Flick wants to be able think in terms of a 22-man first-team.

The star newcomer to Flick’s roster is Leroy Sane, signed for over €50m from Manchester City, and there is every reason to anticipate Sane, 24, making Flick’s dynamic, daring Bayern even more watchable. And that part of the player’s motivation for leaving City – more prospects of making a position in the XI his own – will be satisfied, though there are no guarantees.

That was part of Flick’s point when he said: “We need options. What’s important is that in training we can field 11 against 11.”

Here’s a test of that. Take away the 11 who were on the pitch for Bayern when Kingsley Coman scored the winning goal in the Champions League final against Paris Saint-Germain, and you still have a Bayern goalkeeper, Alexander Nubel, who was captaining Schalke last season and has 17 caps for Germany’s under-21s.

A back four made up entirely of World Cup-winners (Benjamin Pavard, Lucas Hernandez, Jerome Boateng and Javi Martinez), protected by another World Cup-winner, France’s Corentin Tolisso. The team will still be peppered with some of the most promising up-and-coming players in Europe, like French midfielder Mickael Cuisance and Josh Zirkzee, the 19-year-old Dutch striker who has already scored four Bundesliga goals in just 293 minutes of action.

Bayern have said some goodbyes. Ivan Perisic and Philippe Coutinho, on loan there in 2019/20, returned to their parent clubs while Thiago Alcantara appears to be edging closer to a transfer to Liverpool. But Sane will likely take up the role that was shared between Coman and Perisic, wide on the left.

Pace on that flank will not be in short supply, with Sane gliding at speed and Alphonso Davies, the teenaged left-back, zipping past him on the overlap.

As for Bayern’s rivals, the purchasing power of the same Premier League which Sane has departed has weakened RB Leipzig, European Cup semi-finalists, and Bayer Leverkusen.

Chelsea’s swoops for Timo Werner, from Leipzig, and Kai Havertz, from Leverkusen, means two players who were on Bayern’s radar can no longer dent Bayern’s Bundesliga aspirations.

Dortmund are still calculating that they could lose a young star, too, if Manchester United come closer to matching their valuation of Jadon Sancho, with the winger, 20, apparently open to moving back to his native England.

Dortmund’s youthful zest is part of what makes them second favourites for the title. Erling Haaland turned 20 halfway through a remarkable year in which he scored 16 goals in 18 games after joining Dortmund in January.

Jude Bellingham, signed from Birmingham City, has just become Dortmund’s youngest ever goalscorer in a competitive game, at 17 years and 77 days old, registering their second in a 5-0 German Cup win at Duisburg.

Three hundred fans attended that Cup tie, rattling around in a stadium built for more than 30,000. The Bundesliga has eased the behind-closed-doors policy it used when football returned after the spring lockdown. But supporters will only be permitted to attend matches in very limited numbers – no more than one-fifth of stadium capacity – and provided local health authorities, mindful of the continuing risks of contagion, approve.

Bayern have been restricted to no more than 10 per cent of the Allianz Arena’s 75,000 seats for the visit of Schalke, and Sane’s likely Bundesliga debut for his new club against the one where he launched his career.

Four years on from his last match for Schalke, he returns to a Bundesliga altered by world events, but does so in the jersey of a Bayern who, better than anyone, have mastered the demands of tighter schedules, quieter arenas and exacting protocols.

These were the details of the news Bayern Munich's strength in depth an ominous sign as new Bundesliga season begins for this day. We hope that we have succeeded by giving you the full details and information. To follow all our news, you can subscribe to the alerts system or to one of our different systems to provide you with all that is new.