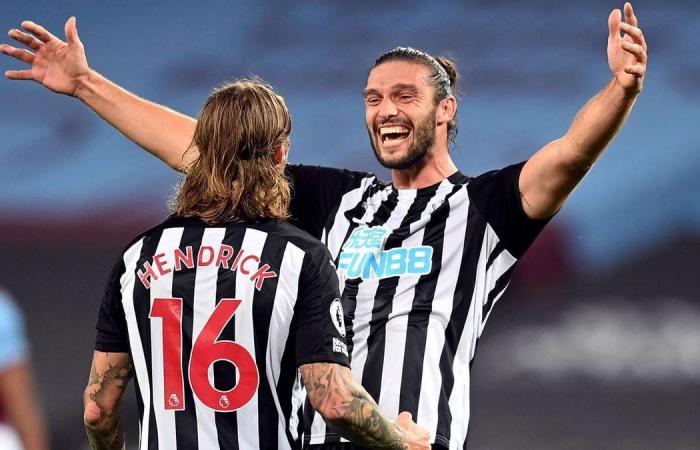 Thank you for your reading and interest in the news Callum Wilson 8, Jeff Hendrick 8; Mark Noble 5: West Ham v Newcastle player ratings and now with details

Hind Al Soulia - Riyadh - WEST HAM RATINGS: Lukasz Fabianski - 6: Will be disappointed that Wilson got to ball first for Newcastle's opening goal. Good reaction save from Fernandez header in first half Reuters

Ryan Fredericks - 7: Some good crosses from the right but had his hands full trying to deal with Saint-Maximin. Booked for foul on French attacker. Reuters

Issa Diop - 6: A tough night trying to deal with both Carroll and Wilson but stuck to his task. AFP

Aaron Cresswell - 6: Did ok down the left for West Ham but should have done better closing down Hendrick before the Newcastle midfielder fired home the second. Getty

Tomas Soucek - 6: Can be so dangerous in the air. One first-half header just wide from Fredericks cross. Getty

Declan Rice - 6: One brilliant ball down the right for Fredericks in first half but his passing radar wasn't its usual accurate self at times. AFP

Mark Noble - 5: Spotlight was on the midfielder after criticising the club over the sale of Grady Diangana. Game pretty much passed him by and he was substituted midway through the second half. Getty

Pablo Fornals - 6: Should have done better when his shot hit the bar via a slight deflection. Little influence on proceedings. Hooked after 67 minutes. Getty

Jarrod Bowen - 5: More involved as first-half went on and West Ham got more in the game but the team needed more from one of their key attacking players. Reuters

Michail Antonio - 6: Often an isolated figure up front. Good chance in first half which he could only drill weakly at Darlow. Reuters

SUBS: Andriy Yarmolenko (On for Noble 67') 7: Had a couple of chances after coming on - one deflected wide and one saved by Darlow. Reuters

Sebastien Haller - (On for Fornals 67') 5: No impact after coming on. Getty

NEWCASTLE RATINGS: Karl Darlow – 7: First Premier League start for two-and-a-half years in place of injured Dubravka. No chance with two chances that hit the bar in first half, decent stop from substitute Yarmolenko in second. Shutterstock

Jamaal Lascelles - 7: Lost possession once in first half that allowed Antonio chance to shoot on goal but otherwise impeccable from Newcastle's big captain. Reuters

Federico Fernandez - 7: Dealt well with everything West Ham through at him - which wasn't much. First-half header forced reflex save from Fabianksi AP

Jamal Lewis - 7: Left-back signed from Norwich linked up well with Wilson in first half, setting up two chances for his fellow new boy. Getty

Isaac Hayden - 7: Early booking didn't faze the midfielder who was a rock in the centre of the park. Getty

Jeff Hendrick - 8: A debut to remember from the former Burnley man. His header set up Wilson's goal, then produced wonderful finish into the roof of the net to make it 2-0. Reuters

Allan Saint-Maximin - 7: Straight back in the attacking groove for Newcastle. Always dangerous but will have a few bumps and bruises as West Ham looked to bring him down before he hit full flow. PA

Callum Wilson - 8: Good debut for the striker signed from Bournemouth. Went close three times in first half before finding the net with poacher's finish after break. Willing runner who caused West Ham problems all night. Getty

Andy Carroll - 8: Could easily have been booked after 10 seconds for flying elbow on Soucek. But the big striker justified manager Bruce's faith with a tireless performance. Lovely bit of skill in first half to bring down ball and see his shot deflected wide. A massive help in his own box from crosses as well. Getty

SUBS: Joelinton - (On for Saint-Maximin 75') 6: Did alright when he came on but the Brazilian could struggle for regular starts this season. Getty

Migel Almiron - (On for Wilson 85') NA: Good cameo from Paraguayan as he set up Henrick's goal and could have scored one himself. AFP

These were the details of the news Callum Wilson 8, Jeff Hendrick 8; Mark Noble 5: West Ham v Newcastle player ratings for this day. We hope that we have succeeded by giving you the full details and information. To follow all our news, you can subscribe to the alerts system or to one of our different systems to provide you with all that is new.