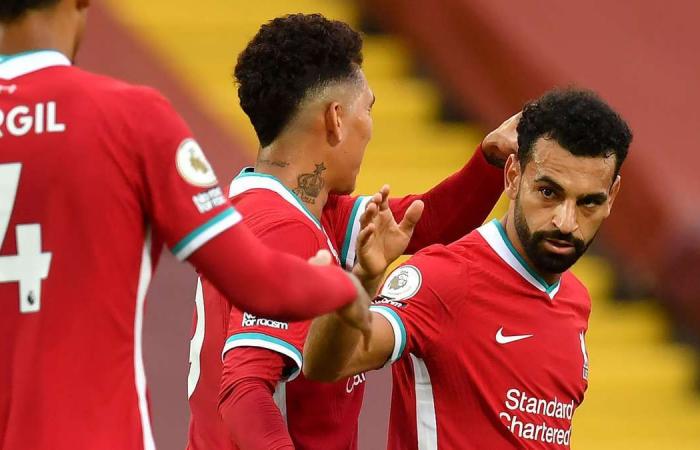 Thank you for your reading and interest in the news Salah 9.5, Phillips 9, Costa 8: Liverpool v Leeds United player ratings and now with details

Hind Al Soulia - Riyadh - LIVERPOOL RATINGS: Alisson Becker – 6. Has he ever had a day like this before for Liverpool? Let in three, but was at fault for none. Getty

Trent Alexander-Arnold – 6. Lax in letting in Harrison, but the right back could not have expected such razor sharp incision by Leeds. Very lucky not to concede an own goal, after Harrison was flagged offside. Reuters

Joe Gomez – 6. The England centre back was found wanting by Harrison’s brilliance for Leeds’ first goal back in the top flight. Getty

Virgil van Dijk – 7. Enjoyed the freedom of the penalty box for his headed goal, then was casual himself as his slip let in Bamford. Reuters

Georginio Wijnaldum – 6. Denied a goal by a fine save by Meslier at the start of the second half, but he really should not have given the goalkeeper a chance. AFP

Jordan Henderson – 6. Had one solid drive in the first half, and did his best to keep up in the midfield frenzy as he works his way back to fitness. Getty

Naby Keita – 6. Usually so sprightly, even he struggled to keep pace with the frantic speed of the season opener, and gave way to Fabinho after 59 minutes. EPA

Mohamed Salah – 9.5. Didn’t mess about with his early penalty, or with his half-volley into the top corner shortly after. A constant menace, and dispatched the winner from the spot, too. Getty

Roberto Firmino – 6. Passed up an early chance in favour of a pull back to no-one. Some of his link up play with Salah and Mane was neat, but he was errant at times, too. Getty

Sadio Mane – 7. Struggled to get much change out of Ayling, but linked up well with his fellow forwards at times. EPA

SUBSTITUTES: Fabinho – 6. Initially struggled to get to the pace after coming on for Keita, but had a decisive influence when he won the late penalty. Getty

Curtis Jones – 5. On for Henderson, his most notable contribution came when his foul on Kock let to Van Dijk’s second goal being cancelled. Reuters

LEEDS UNITED RATINGS: Illan Meslier – 6. A limp attempt to keep out Van Dijk’s header. Looked remarkably confident playing out from dangerous positions, and made a steady block on Wijnaldum. Getty

Luke Ayling – 7. His loose back pass nearly set up another for Salah, but it would have been harsh had he been at fault given the shift he put in against Mane. Getty

Robin Koch – 4. Hellish start to his debut as his third minute handball gave away a penalty, and then he lost Van Dijk for the second. At least redeemed some of the damage by running down Mane in the second. Getty

Pascal Struijk – 6. A late call up for injured Liam Cooper, and he needs to work on his understanding with Koch on this evidence. AP

Stuart Dallas -7. Leeds might have got lucky for Bamford’s goal, but Dallas’ work in the build up was excellent. Getty

Kalvin Phillips – 9. Extraordinary range of passing, as shown by his sensational pass to free Harrison. When he wasn’t spraying those, he was doing his best to break up Liverpool attacks. AFP

Helder Costa – 8. Central to so much that was exciting. He had the ball in the goal in the first 10 minutes, but was offside. He had a shout for a penalty. Made one mazy dribble. Set up Klich’s goal. AFP

Pablo Hernandez – 6. Struggled to keep up with the whirlwind pace, as he was dispossessed cheaply in dangerous areas. Subbed just after the hour. Getty

Mateusz Klich – 8. Superb control and finish from Costa’s pass as Leeds' equalised for the third time in the game. Made a heroic block late from a Wijnaldum shot. Getty

Jack Harrison – 8. His wonder strike for the first goal of Leeds’ return to the top flight was the highlight, but the rest of his game was outstanding, too. EPA

Patrick Bamford – 7. Look flaky early on, but profited from a rare Van Dijk error to scoop in the second leveller for Leeds. Made way for their record signing in the second half. AFP

SUBSTITUTES: Tyler Roberts – 6. Added more industry to the Leeds effort, and made one brave block on Salah. PA

Rodrigo – 3. Terrible decision to go for a tackle on Fabinho. Gave away the penalty that cost Leeds the points. The second Leeds player to have a debut to forget. PA

Jamie Shackleton – NA. The academy product did not have enough time to make an impression after coming on as a late sub. File photo / Getty Images

These were the details of the news Salah 9.5, Phillips 9, Costa 8: Liverpool v Leeds United player ratings for this day. We hope that we have succeeded by giving you the full details and information. To follow all our news, you can subscribe to the alerts system or to one of our different systems to provide you with all that is new.