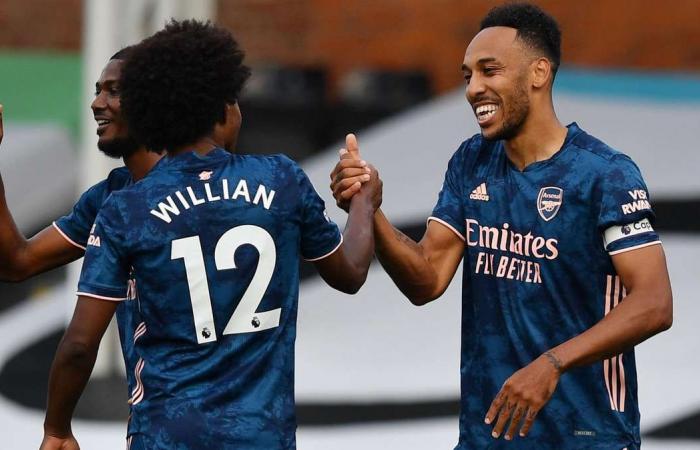 Thank you for your reading and interest in the news Willian 9, Gabriel 8, Michael Hector 4: Fulham v Arsenal player ratings and now with details

Hind Al Soulia - Riyadh - FULHAM RATINGS: Marek Rodak – 6. Couldn’t do much about any of the goals and produced a few strong saves to avoid a complete rout. PA

Denis Odoi – 5. Was given a thorough run around up against Arsenal’s quick attacks. To be fair, containing Aubameyang is as tough as it gets for full backs. AFP

Tim Ream – 5. Made a mess of an attempted clearance that resulted in Lacazette’s opening goal. Reuters

Joe Bryan – 6. Like the rest of the Fulham defence, was under constant pressure from Arsenal’s forwards but stuck to his task. AFP

Harrison Reed – 5. Couldn’t get a foothold in the game in his first Premier League appearance as a permanent Fulham player.AP

Neeskens Kebano – 5. Named after the great Johan Neeskens but this was not a performance the Dutch midfielder would’ve been proud of. AFP

Josh Onomah – 5. Took fewer touches than Arsenal goalkeeper Leno, who had little to do all game. Says it all about his contribution. EPA

Ivan Cavaleiro – 6. Looked like he could cause a few problems based on the first few minutes but faded fast. AP

Aboubakar Kamara – 6. Full of running but starved of service in a game where Fulham rarely troubled Arsenal in the final third. EPA

SUBS: Aleksandar Mitrovic (63’) – 7. Fulham’s liveliest player and tried to force chances. Might have caused trouble if he had more time on the pitch. AFP

André-Frank Zambo Anguissa (63’) – 5. Such was his impact, the only available photo was this one of him behind Ceballos. AP

ARSENAL RATINGS: Bernd Leno – 7. Days won’t come much easier than this. Was involved so little that pitchside photographers didn’t bother taking any action shots of the German goalkeeper. Reuters

Rob Holding – 7. A composed and assured performance. Looks to have won over Mikel Arteta. AFP

Gabriel – 8. Super debut for the Brazilian, tucking home a header for Arsenal’s second and kept a clean sheet. Reuters

Kieran Tierney – 7. Got forward, always offered an outlet on the left flank, and handled his defensive duties well. EPA

Hector Bellerin – 6. A solid performance from the Spaniard. Docked a point for a ridiculous rugby tackle. Reuters

Mohamed Elneny – 7. A comfortable afternoon back in the Arsenal midfield for the Egyptian. Getty Images

Granit Xhaka – 6. Is there a footballer on Earth who loves a sideways pass more than the Swiss? AP

Willian – 9. Almost scored a marvellous debut goal only for his free-kick to hit the post. Still produced a hat-trick of assists, though. A fine debut from the Brazilian. EPA

Alexandre Lacazette – 7. Scored Arsenal’s first goal of the season and they won’t come any simpler than this tap-in. Had a few other chances he perhaps could’ve done better with. Reuters

Pierre-Emerick Aubameyang – 8. Scored the third with a fine, curling finish into the top corner. Was a constant menace. EPA

SUBS: Nicolas Pepe (76’) – 6. Tried to impact the game by getting in behind the Fulham backline but ultimately made little contribution. Getty Images

Dani Ceballos (79’) – 7. Only on the pitch for 11 minutes but still displayed his class. Fulham will be grateful the Spaniard didn’t start. AFP

These were the details of the news Willian 9, Gabriel 8, Michael Hector 4: Fulham v Arsenal player ratings for this day. We hope that we have succeeded by giving you the full details and information. To follow all our news, you can subscribe to the alerts system or to one of our different systems to provide you with all that is new.