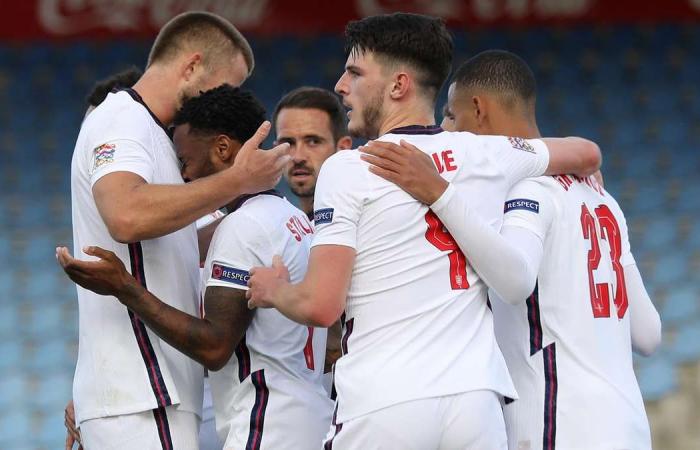 Thank you for your reading and interest in the news Joe Gomez 8, Raheem Sterling 7, Kyle Walker 5: England v Iceland player ratings and now with details

Hind Al Soulia - Riyadh - ENGLAND RATINGS: Jordan Pickford - 7/10: Not a busy day for the Everton goalkeeper, but a satisfactory one. He showed presence and authority when Iceland slung in their high crosses, and had a stroke of luck when Birkir Bjarnason skied his late penalty. Reuters

Kyle Walker - 5: Careless in collecting a second yellow card as England became frustrated midway through the second half. His suspension looks a setback in the battle for the right-back role, where Walker’s experience is no guarantee of his being first-choice. Getty

Joe Gomez - 8: An intelligent and poised performance until he conceded a late penalty. His anticipation, calmness and positioning had, up to the late blip, made him England’s outstanding contributor. Getty

Eric Dier - 7: Pleased to be now operating in his favourite position, centre-back, for country as well as club, Dier stood up to the physical tests imposed by Iceland and their aerial strategy. AP

Kieran Trippier - 7: Pushed into service at left-back, on the opposite flank to his usual one, the Atletico Madrid man adapted with no fuss. His dead-ball delivery posed occasional difficulties for Iceland’s well-organised back line. Getty

Declan Rice - 6: Applied good energy to his task, at least for the first hour or so and was keen to break forward from midfield, and take Iceland’s deep defensive lines by surprise. His shooting, once in threatening positions, was erratic, though. Reuters

James Ward-Prowse - 6: On his first start for the senior national team, made a sound impression, although without showing off his best repertoire of passing and free-kick expertise. Filled in briefly at right-back when Walker was sent off. PA

Jadon Sancho - 7: The Borussia Dortmund winger has had more dazzling games in the last 12 months than this. He started promisingly, and found pockets of space behind the defence but looked a little short of his peak sharpness. Reuters

Phil Foden - 6: On his England debut, the gifted Manchester City midfielder made a very bright start, with a couple of excellent through-balls. Against a well marshalled Iceland, more of that was needed, but his influence faded. Reuters

Raheem Sterling - 7: Took his penalty very coolly, assuming the responsibility with Kane by then substituted. Not one of his greatest nights in an England shirt but he kept looking for new ways to open up the opposition. AFP

Harry Kane - 6: The captain ought to have registered his 33rd goal for England early on, his alert finish at the far post ruled out for offside when VAR, not used in this competition, would have ruled it onside. Still short of full match fitness. Reuters

SUBS: Danny Ings (On for Foden 68') 7: Almost 5 years after his last cap, the striker made his presence felt late on as England pushed for the winner. Getty

Trent Alexander-Arnold (On for Sancho 73') 7: Introduced once England were down to 10 men, and played tidily at right-back. Getty

Mason Greenwood (On for Kane 78') 7: An encouraging cameo for the teenage debutant. Had an angled shot blocked. Getty

These were the details of the news Joe Gomez 8, Raheem Sterling 7, Kyle Walker 5: England v Iceland player ratings for this day. We hope that we have succeeded by giving you the full details and information. To follow all our news, you can subscribe to the alerts system or to one of our different systems to provide you with all that is new.