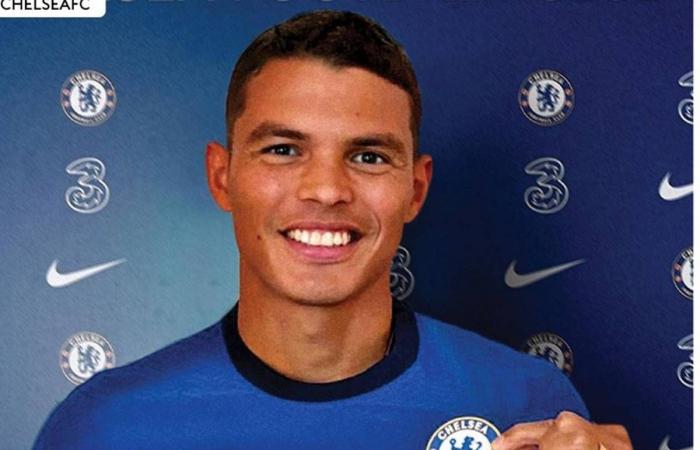 Aden - Yasmine El Tohamy - Silva, 35, has agreed an initial one-year contract with the Premier League club, who have the option of extending the deal by a further season

Silva, 35, has agreed an initial one-year contract with the Premier League club, who have the option of extending the deal by a further season.
"I am so happy to be joining Chelsea. I am delighted to be a part of Frank Lampard's exciting squad for next season and I'm here to challenge for honours," Silva told Chelsea's website.

The former AC Milan centre-back represents a departure from Chelsea's usual protocol of focusing major signings yet to reach their peak.

But Lampard moved quickly to bolster a defence that conceded more Premier League goals than any other team in the top 10.

Silva won seven Ligue 1 titles with PSG and will be expected to provide experience and leadership at the heart of Lampard's defence.

With inconsistent quarter Antonio Rudiger, Kurt Zouma, Fikayo Tomori and Andreas Christensen the current centre-back options for Lampard, it seems certain Silva will be a regular at the start of the season.

The only question is if the ageing Silva can cope with the unique physical demands of the Premier League, especially in a season which will be busier than usual due to the later start date.

"We are delighted to be able to add a player of Thiago Silva's proven world-class credentials to our squad," Chelsea director Marina Granovskaia said.

"Having performed at the highest level for many years, we have no doubt his experience and quality will complement the many exciting talents we already have here.

"Thiago will be an excellent fit and we hope he can add some new trophies to his impressive list of honours."
Silva, who featured 315 times for PSG and won 23 trophies, posted an emotional farewell on social media.

"Today a cycle ends, after eight years with PSG, I would like to thank my team-mates, all the technical team and the management, the fans, my family, God and my friends, for all these happy moments that we lived in the City of Light," he wrote.

"Here, with my wife @bellesilva, we have lived unforgettable moments, our children have grown up, we have become French citizens, and we will forever carry these years lived and France in our hearts. Thank you so much."
Silva is the latest new arrival at Stamford Bridge as Lampard rebuilds a side that finished fourth in the top-flight last season, 33 points behind champions Liverpool, and lost the FA Cup final against Arsenal.

Chelsea are also expected to sign Bayer Leverkusen forward Kai Havertz shortly in a Â£90 million ($119 million) deal that would take their total spend in the summer window to a Premier League record Â£230 million.
It is believed Lampard would like more signings before the new season, with a goalkeeper to replace the erratic Kepa Arrizabalaga and another defender on his wanted list.

Lampard's new recruits could make their debuts in Chelsea's Premier League opener at Brighton on September 14.

These were the details of the news Chelsea sign former PSG captain Thiago Silva for this day. We hope that we have succeeded by giving you the full details and information. To follow all our news, you can subscribe to the alerts system or to one of our different systems to provide you with all that is new.