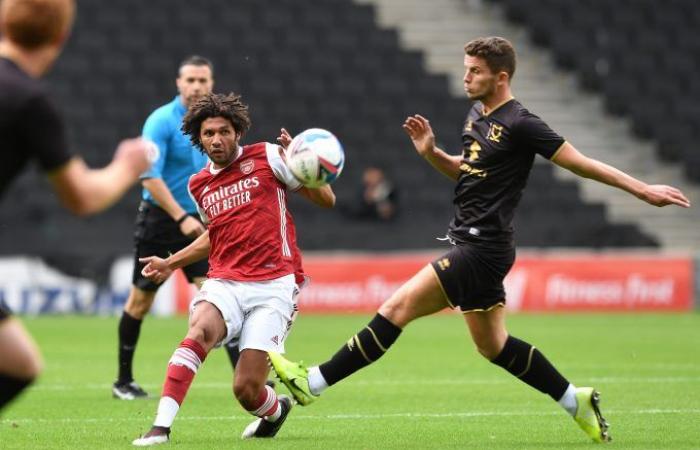 Egypt international, Mohamed Elneny, has scored in his first appearance back with Arsenal as they beat MK Dons 4-1 in their first pre-season friendly.

Elneny spent the entirety of last season with Turkish Super Lig side Besiktas. He has been linked with a move away from London ever since his loan spell ended.

It was reported that he would train with Arsenal during their pre-season preparations and he eventually started alongside Granit Xhaka in midfield in their first friendly encounter against MK Dons.

Just five minutes into the game, the opposition goalkeeper, Lee Nicholls, mistakenly gave the ball to Elneny just outside the penalty area who’s first time shot found the back of the empty net.

Then, in the 10th minute Eddie Nketiah doubled his side’s lead by smashing the ball into the far corner after Bukayo Saka’s back pass inside the 18-yeard box.

15 minutes before the half-time whistle, Arsenal defender Rob Holding’s header marked MK Dons’ only goal after he put the ball into his own net.

In the 76th minute Arsenal youngster, Mark McGuiness, scored the Gunners’ third goal with a powerful header. Ten minutes later Reiss Nelson scored the fifth and final goal of the game from the penalty spot.

For now Elneny’s future with Arsenal is still unclear but for now he will remain in their squad for the foreseeable future. Their next game will be on August 29th when they face Liverpool in the FA Community Shield.

These were the details of the news Mohamed Elneny scores in Arsenal’s pre-season win for this day. We hope that we have succeeded by giving you the full details and information. To follow all our news, you can subscribe to the alerts system or to one of our different systems to provide you with all that is new.