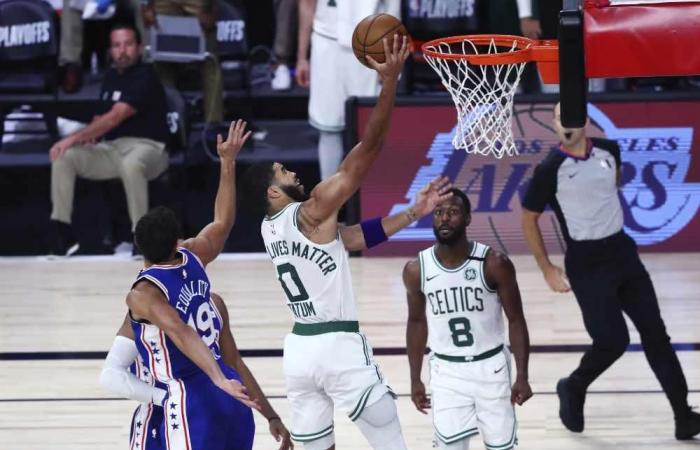 Thank you for reading the news about Celtics first to advance in NBA playoffs, Doncic nails epic game winner and now with the details

Jeddah - Yasmine El Tohamy - MIAMI, Florida: Kemba Walker scored 32 points and Jayson Tatum added 28 and 15 rebounds as the Boston Celtics beat the Philadelphia 76ers 110-106 Sunday to reach the second round of the NBA playoffs.
The Celtics swept the best-of-seven Eastern Conference first-round series four games to none — the first sweep in 15 playoff series between the East rivals.
Also, Luka Doncic wasn’t about to let a sprained ankle slow him down, nailing a clutch game-winner at the buzzer to lift the Dallas Mavericks to a 135-133 over-time playoff win over the Los Angeles Clippers.
The 21-year old Slovenian phenom, whose status for even playing was in doubt after the Friday injury, finished with 43 points, 17 rebounds and 13 assists to level their first round Western Conference playoff series at two games each.
“This shows our heart and that we can fight,” Doncic said. “It is unbelievable the way the team fought. I just love this team.”
For Walker, who arrived in Boston after eight seasons of frustration with the Charlotte Hornets, it was his first win in an NBA playoff series.
“It feels good,” Walker said, although he wasn’t going into full-on celebration mode.
“The work’s not done,” he added. “We won a series, but we’re still looking forward to some more tough ones.”
With their backs against the wall, Joel Embiid and the 76ers kept it close and trailed by just two points late in the third quarter before forward Tobias Harris took a hard fall under the basket, his head slamming the hardwood.
Harris was able to leave the court under his own steam, holding a towel to his left eye and temple, and returned after treatment for what the team called a laceration over his left eye.
But the Celtics closed the third quarter on a 12-0 run that effectively spelled the end of the 76ers’ hopes.
“I feel like the game flipped when Tobias went out,” Sixers coach Brett Brown said. “It was a two-point game, three-point game at that stage. Up until that moment, I felt pretty good about what we were doing.”
Embiid, desperate to avoid being swept, finished with 30 points, 10 rebounds and five assists for Philadelphia.
Harris scored 20 as six 76ers players scored in double figures — but the absence of injured Ben Simmons was a glaring problem for Philadelphia defensively and it was the Celtics who advanced to a second-round clash with either the defending champion Toronto Raptors or Brooklyn.
The Raptors took a 3-0 series lead into their game against the Nets later Sunday.
Doncic lifted the Mavericks level in their series, his first NBA playoff appearance, without the assistance of his offensive sidekick Kristaps Porzingis, who was a late scratch because of a knee injury.
But the pre-game buzz was all about Doncic’s not Porzingis’ health. Doncic sprained his left ankle in the second half of game three of the series and then had an MRI on Saturday to determine the extent of the damage.
“This morning I wasn’t feeling good but as soon as I stepped on the court I knew I could go,” said Doncic, who recorded his second straight triple double.
Trey Burke added 25 points, Tim Hardaway scored 21 and Seth Curry chipped in 15 points for Dallas, who led by 12 with nine minutes remaining in the fourth quarter.
Lou Williams had 36 points and Kawhi Leonard finished with 32 points for the Clippers, who blew a 21-point first-half lead.
Ivica Zubac contributed 15 points, while Paul George struggled at both ends of the court, managing just nine points on three-of-14 offensive shooting.
Game five is on Tuesday.

These were the details of the news Celtics first to advance in NBA playoffs, Doncic nails epic game winner for this day. We hope that we have succeeded by giving you the full details and information. To follow all our news, you can subscribe to the alerts system or to one of our different systems to provide you with all that is new.