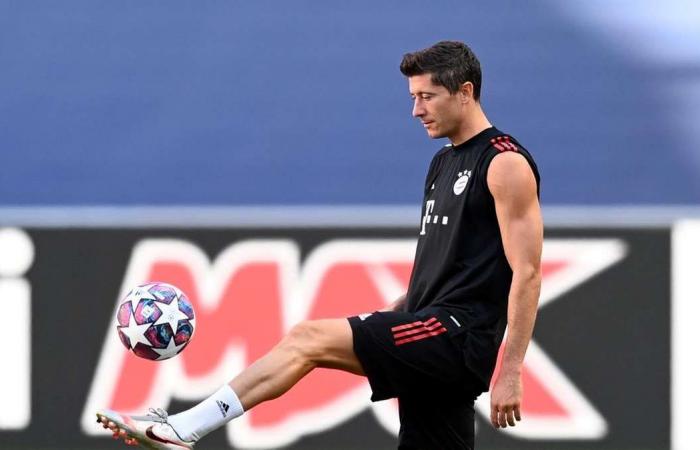 Thank you for your reading and interest in the news Bayern stars Lewandowski, Coutinho and Gnabry prepare for PSG Champions League showdown in final training session - in pictures and now with details

Forward Robert Lewandowski - with 55 goals this season - and midfielders Philippe Coutinho and Serge Gnabry were among the stars preparing for the big match in Lisbon with a final training session.

"In our games over the last 10 months we've always tried to impose our style on the opposition," Flick said, with treble-chasing Bayern on a 20-match winning run.

"We've always played with a high line and ultimately we've got results doing that so we won't change too much.

"We don't want to give too much space to the opposition.

"What's important is we can press the opposition when we are in possession and make sure we cover the ground."

Bayern have powered into the Lisbon final by scoring 42 goals in 10 European matches.

However, they nearly came unstuck early in Wednesday's semi-final against Lyon as the French side found plenty of space to attack behind Bayern's back four.

Joshua Kimmich is tipped to switch from midfield to right-back, potentially tasked with keeping Neymar and Mbappe away from Bayern's goal.

Flick hinted at changes to his starting line-up after substitutes Philippe Coutinho and Kingsley Coman impressed against Lyon.

"When they came off the bench, Kingsley and Philippe showed they can strengthen the side," he said.

"It's our third game in quick succession so we need to look at the players' fitness levels."

Having won the Bundesliga and lifted the German Cup, Bayern are chasing the treble under Flick, who only took over from Niko Kovac in November.

Bayern shook up European football with a stunning 8-2 demolition of Spanish giants Barcelona in the quarter-finals and are in confident mood for Sunday's final.

"If we are able to produce our best performance, if we are all at 100 per cent, we will be able to win," added Flick.

These were the details of the news Bayern stars Lewandowski, Coutinho and Gnabry prepare for PSG Champions League showdown in final training session - in pictures for this day. We hope that we have succeeded by giving you the full details and information. To follow all our news, you can subscribe to the alerts system or to one of our different systems to provide you with all that is new.