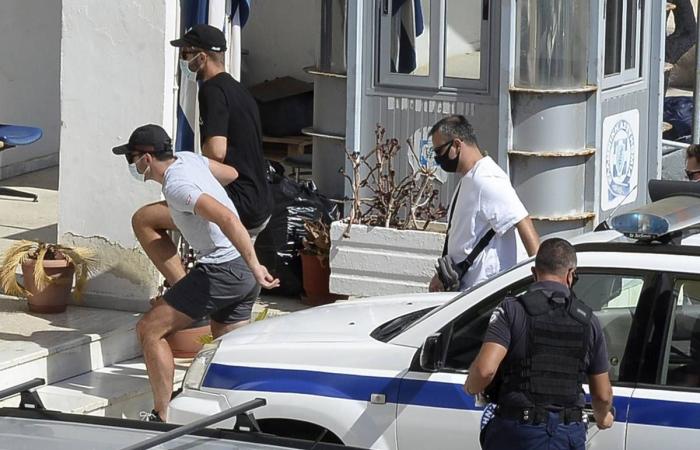 Manchester United captain Harry Maguire is expected to appear before a prosecutor in a Greek court on Saturday after being arrested following a late-night incident on the party island of Mykonos.

Maguire, one of the most high-profile soccer players in England, was pictured being escorted into a police station in the Aegean island of Syros, which neighbors Mykonos, by plain-clothed officers on Friday.
The England international has been "fully cooperating" with Greek authorities, United said in a short statement, after the incident that led to his arrest in the early hours of Friday. Greek state ERT TV said Maguire's brother and a friend were also arrested.

Local police said three British nationals face charges of verbally abusing and using physical violence against police, as well as attempted bribery, after officers were called to an incident in Mykonos involving two quarreling groups of people. The three men allegedly abused and punched one of the policemen who was attempting to break up the quarrel, resisted arrest, and subsequently attacked officers outside the police station, police said, without naming Maguire.

A police statement said one of the three arrested men tried to offer police money to avoid being taken into custody.
Syros is the administrative center of the Cyclades islands, where Mykonos is.
United's players are on their offseason break after losing to Sevilla in the Europa League quarterfinals on Sunday.
The 27-year-old Maguire is the world's most expensive defender, having signed for United from Leicester last year in a deal worth 80 million pounds ($97 million). He became captain midway through his first season at Old Trafford.

These were the details of the news Man United captain set to appear in Greek court after arrest for this day. We hope that we have succeeded by giving you the full details and information. To follow all our news, you can subscribe to the alerts system or to one of our different systems to provide you with all that is new.