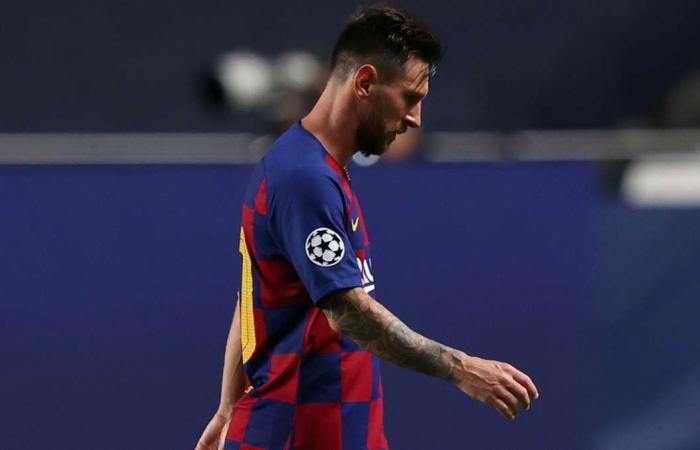 Thank you for your reading and interest in the news Lionel Messi 4, Antoine Griezmann 3, Thomas Muller 9: Barcelona v Bayern Munich player ratings and now with details

Hind Al Soulia - Riyadh - BARCELONA RATINGS: Marc-Andre ter Stegen - 3: A bad night for the goalkeeper who believes he, and not Bayern’s Neuer, should be Germany’s No 1. Besides the goals conceded, his passing, a supposed forte, was very poor. Getty

Nelson Semedo - 4: The right back charged with policing Bayern’s Davies and Perisic was always in for a tough night. Semedo had his moments going forward but too few of them. Reuters

Gerard Pique - 3: A career low for this serial champion. Poorly positioned again and again, flailing against the expert crossing of Bayern, and evidently fatigued. AFP

Clement Lenglet - 3: A harsh reverse for the surprise protagonist of last weekend’s last-16 win over Napoli. Lenglet won his key aerial battle then; he lost too many battles against Bayern. EPA

Jordi Alba - 5: Once upon a time, he was Lionel Messi’s most reliable ally, a firefly down the left flank. Two cameos, in the lead up to Barca’s goals, reminded of those days. The rest? Forgettable. Getty

Sergi Roberto - 3: Gave away the ball in the build-up to Bayern’s second goal and, selected to galvanise midfield, seldom imposed himself on it before being substituted at half time. AFP

Sergio Busquets - 3: The most obvious emblem of Barcelona’s decline may be Busquets. Outpressed, slow to the tackle, unable to ever set the tempo, a horrible night for a great champion. EPA

Frenkie de Jong - 4: One lovely through-ball recalled why Barcelona signed him. His slack marking for Joshua Kimmich’s goal pointed to how far short he is of being the complete midfielder. EPA

Arturo Vidal - 3: Vidal came to Barcelona, via Bayern and Juventus, for his trophy-winning knack and his warrior credentials. Some knacks just run out. Ineffective against Bayern. EPA

Lionel Messi - 4: Messi may never have been so dwarfed by a scoreline, so embarrassed as a captain. And he gave the ball away for Bayern’s seventh. PA

Luis Suarez - 5: A brilliant goal, though it came too late to change the tide. And for much of the first half Suarez was unusually marginal, outpaced when it mattered. EPA

Substitutes: Antoine Griezmann - 3: It’s enough of a statement that last summer’s €120m signing, fully fit, started only on the bench. A deflating year for Griezmann got worse against Bayern. Little impact. EPA

Ansu Fati - 4: The teenager, on as a substitute, offered fresh options from wide, although the cause was lost by then. He will see better days as a Barca player. AFP

Coach: Quique Setien - 2: Appointed in January, this coach of noble theories has been a practical disaster. Whatever he conceived as the answer to a formidable Bayern, it failed horribly. Reuters

BAYERN MUNICH RATINGS: Manuel Neuer - 7: Happily placed with his side three goals up after just over half an hour. But he will also know his marshalling of his defence was sometimes imperfect. AFP

Joshua Kimmich - 8: As talented as a full-back as he is in central midfield, Kimmich was in his less favoured right-back role and still shone, setting up one goal, scoring another. AP

Jerome Boateng - 6: He has had better nights, personally, but worse nights against Barcelona - the semi-final in 2015 for instance - and his errors in Lisbon will be forgotten. Reuters

David Alaba - 7: His hapless own goal - Barcelona’s equaliser - summed up a wild, haphazard start, though Alaba’s pace at his new position of centre-back would prove vital later. EPA

Alphonso Davies - 8: One of the discoveries of the season, Davies, the winger turned left back, rose to the occasion to set up, via an impudent run and cross, Bayern’s fifth goal. AFP

Thiago - 8: A big night for the former Barcelona midfielder, and a surprising one for a man who remembers Barca as a club who normally value keeping the ball. He was commanding. Reuters

Leon Goretzka - 9: Authoritative, as he has been in Bayern’s march to their domestic triumphs, in the central midfield role he now governs in all its aspects. AP

Serge Gnabry - 8: Understated, hard-working, imaginative. He has had a terrific season, full of zest, generosity and a poise in his finishing that was epitomised in Bayern’s third goal. AFP

Ivan Perisic - 8: Scored perhaps the most important goal, the well-taken second, to put Bayern 2-1 in front after a helter-skelter start. A constant menace. AFP

Robert Lewandowski - 8: His standards are so high that it now looks like a poor night for the Pole when a Bayern match goes 82 minutes without a Lewandowski goal. He got his eventually. EPA

Substitutes: Kingsley Coman - 7: It was a reminder of Bayern’s great strength from the wings when he came on and kept up the level of threat. PA

Philippe Coutinho - 8: Administered the ultimate humiliation with his two late goals against the club who have loaned him to Bayern, and reminded the world of his delicate talents. AFP

Niklas Suele - NA. Too late to make an impression. AP

Corentin Tolisso - NA. Too late to make an impression. AP

Lucas Hernandez - NA. Too late to make an impression.

Coach: Hansi Flick - 8: The opening, chaotic, first quarter-hour made Flick, in only his sixth ever Champions League match, look like a novice. The scoreline makes him a hero. PA

These were the details of the news Lionel Messi 4, Antoine Griezmann 3, Thomas Muller 9: Barcelona v Bayern Munich player ratings for this day. We hope that we have succeeded by giving you the full details and information. To follow all our news, you can subscribe to the alerts system or to one of our different systems to provide you with all that is new.

PREV Saudi Games sees huge interest, registration extended by a week
NEXT Napoli draw with Lecce to leave Roma on Serie A summit