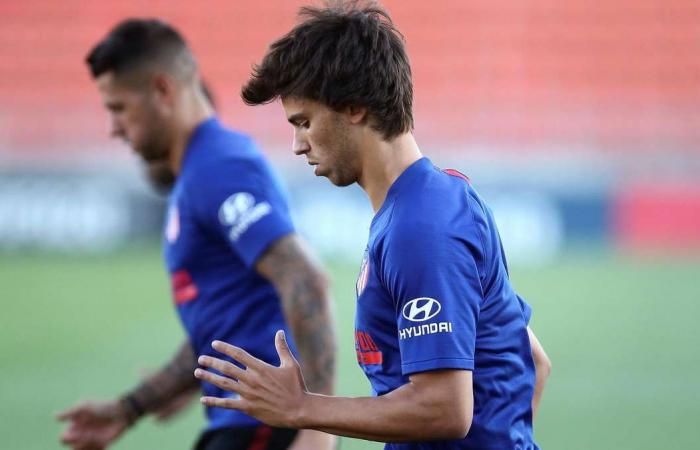 Hind Al Soulia - Riyadh - At Benfica’s practice headquarters, south of the Tagus and some distance from the heart of Lisbon, a familiar face showed up on Tuesday.

Still boyish, Joao Felix has taken on a lot since this was his daily workplace and Benfica identified him as the most talented teenager they had seen for many years.

These days they joke that younger brother Hugo,16 and enrolled in Benfica’s youth system, may turn out ever better. It would suit Benfica nicely if he does. Thirteen months ago, Joao Felix’s sale to Atletico Madrid yielded over €120 million (Dh518m), a significant tranche of which went to the Lisbon club.

Atletico have been borrowing Benfica’s Seixal practice site in the lead-up to Thursday night’s Champions League quarter-final against RB Leipzig in Lisbon. Though the behind-closed-doors conditions around the makeshift conclusion to the Champions League means local support for Felix is muted, there is some fascination about what part the wonderkid, now 20, will play in it.

He seems to respond to the big stage in his home country: last summer, he made his international debut, in Porto in the Uefa Nations League finals, and helped Portugal to lift the prize.

The journey since has been a little bumpy. Atletico’s record signing assumed not only the burden of a massive fee at a tender age, but the responsibility, in part, of replacing Antoine Griezmann, an Atletico great departed for Barcelona.

Felix began well enough with hints that, in the most expensively assembled Atletico team ever, he could become the key man in a shift from the cagey, counter-attacking style that has become their trademark under Diego Simeone. Felix can be dazzling on the ball, ideally playing just off a main striker.

He is also young and still adapting to a club which under the long, transformative management of Simeone, has been geared to thrive against opponents with a higher share of possession. That requires of Atletico’s players that they build up the physical strength and stamina to hunt and to chase, whatever their position on the field.

Felix’s first season asked a lot of him, and has been interrupted by injury. His return of eight goals from 35 games, across competitions, looks slender next to the 20 he accumulated in what was his first campaign as a senior player, 2018-19, with Benfica.

It looks slight next to Griezmann’s record at an austere, low-scoring Atletico: the Frenchman always hit 20 goals, at least. But it looks less bland when you note that by far Atletico’s top scorer this term is Alvaro Morata with his 16 from 32.

There have been lean times for all of them. At one stage Atletico, La Liga champions in 2014, were struggling to make the top four.

After the resumption of football in June, they rallied, helped by the fact that in their rear-view mirror was an extraordinary night at Anfield.

Backs to the wall, the familiar, rugged Atletico beat Liverpool 3-2 in extra time, knocking the season’s least beatable club side out of the Champions League.

Felix played a part in that epic comeback, but its hero was Marcos Llorente, the midfielder stunningly reinvented as goalscorer. Llorente’s contributions to the 18-match unbeaten run that closed Atletico’s season, helping them to third place in La Liga, have made him a likelier starter against Leipzig than Felix.

In the absence of Angel Correa - who tested positive for Covid-19 at the weekend (he is asymptomatic) and so has not travelled to Portugal - winger Yannick Carrasco is also favoured for a place in Simeone’s XI.

So Felix may well start on the bench in Lisbon, a city that has a special resonance for others in the Atletico camp. It was at the Estadio da Luz in 2014, where Simeone guided Atletico to within a stoppage-time equaliser to the club’s first ever European Cup, denied by a last-gasp Sergio Ramos goal, and then a heartbreaking three more Real Madrid goals in extra time.

For players like Koke, the captain, and Diego Costa, the striker who limped off injured early that night, Lisbon will always stimulate bittersweet memories. Two years later, they lost another Champions League final in Milan, also to Real Madrid, and also in extremis, beaten on penalties.

“Football owes Atletico a Champions League,” said the club’s president, Enrique Cerezo. “We’ve had it within grasp before, and it’s been snatched away. Maybe this is the year it happens.”

These were the details of the news Joao Felix returns home aiming to help Atletico Madrid achieve Champions League glory for this day. We hope that we have succeeded by giving you the full details and information. To follow all our news, you can subscribe to the alerts system or to one of our different systems to provide you with all that is new.