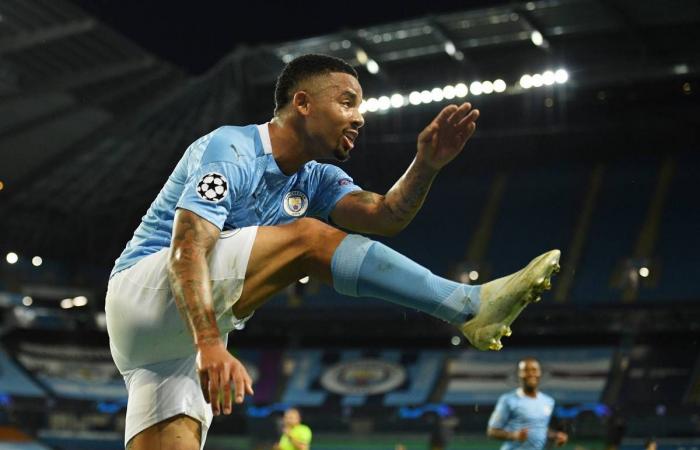 Aden - Yasmine El Tohamy - City won 2-1 on the night and 4-2 on aggregate after goals from Sterling and Jesus.

Manchester City took advantage of two shocking mistakes by Raphael Varane to beat Real Madrid 2-1 in their Champions League last 16 second leg on Friday and advance to the quarter-finals as Pep Guardiola came out on top in his duel with Zinedine Zidane.

The Frenchman had never been knocked out of Europe's elite club competition as Real coach, leading them to three consecutive victories between 2016 and 2018 in his first spell before returning to the job last year.

But Madrid had been left with a mountain to climb in this tie after throwing away the lead to lose 2-1 in the first leg in Spain in February, before the coronavirus forced the competition into hibernation.

An identical defeat at an empty Etihad Stadium means it is City who advance 4-2 on aggregate.

Without Sergio Ramos due to suspension, Real were undone by mistakes by their other first-choice centre-back.

Varane was dispossessed inside the box in the ninth minute allowing Raheem Sterling to put City ahead, and his poor headed backpass attempt gifted Gabriel Jesus another goal midway through the second half.

Before that second goal the tie had been in the balance with the in-form Karim Benzema having scored for the visitors just before the half-hour mark.

The circumstances may be highly unusual, but this is still City's finest Champions League result, their most significant victory in a knockout tie.

"We beat a top team, the best club in this competition so for us it is massive," Jesus told BT Sport.

City's best performance in the competition remains a run to the semi-finals in 2016, when they went out rather limply to Real.

Now, with only two former winners still involved in Bayern Munich and Barcelona, City should very possibly be considered the favourites to win the competition in Lisbon on August 23.

If they do so, the victory would taste all the sweeter coming so soon after their successful appeal to the Court of Arbitration of Sport against a two-year ban from Europe handed down by Uefa for Financial Fair Play breaches.

They have already qualified for next season's tournament after coming second in the Premier League but now they can look forward to facing Lyon in the quarter-finals next Saturday at the Estadio Jose Alvalade.

Real, meanwhile, will get over this.

They have dined out on success in the Champions League in recent years but their main objective after the coronavirus shutdown was to win La Liga and they did that.

"I think we get nine out of 10 for this season," said Rodrygo. "We don't deserve 10 because of the Champions League but we have still had a great season."

Zidane's team overhauled Barcelona thanks to 10 successive victories after La Liga returned in June but they were not especially prolific in front of goal during that run, despite Benzema's fine form.

It was already going to be an uphill struggle for them in the absence of Ramos, sent off late in the first leg, and their task became even harder after they conceded an early opener.

City's high pressing paid off as Varane was barged off the ball in his own area by Jesus, who squared for Sterling to roll in.

There was a response from the 13-time European champions, though, with Benzema and Eden Hazard forcing saves from Ederson before their equaliser arrived in the 28th minute.

A fine move ended with Benzema feeding Rodrygo and the young Brazilian clipping in a cross from the right for the Frenchman, who rose above Aymeric Laporte and Fernandinho to head in from the edge of the six-yard box.

It was his 65th goal in the Champions League, putting him one clear of Bayern Munich's Robert Lewandowski on the overall list and behind only Cristiano Ronaldo, Lionel Messi and Raul.

Unfortunately for Real, Benzema was not able to add to that tally and this tie was effectively ended by another Varane blooper.

The Frenchman struggled with an awkward high ball downfield and his header back towards Thibaut Courtois was short, allowing Jesus to prod it beyond the goalkeeper and into the net.

Real will not return to Lisbon, where they won the Champions League in 2014, but the dream remains alive for Guardiola and City.

These were the details of the news Manchester City pounce on Raphael Varane mistakes to overcome Real Madrid for this day. We hope that we have succeeded by giving you the full details and information. To follow all our news, you can subscribe to the alerts system or to one of our different systems to provide you with all that is new.