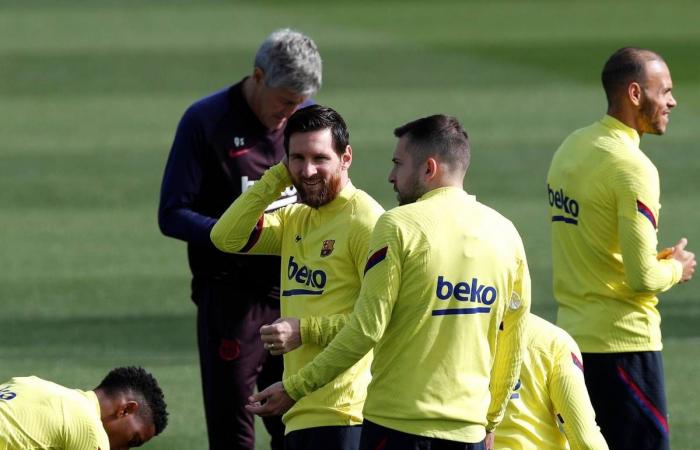 Aden - Yasmine El Tohamy - After having three weeks to rest and process their turbulent end to the domestic campaign, Barcelona return to action in Saturday's Champions League last-16 second leg at home to Napoli, with coach Quique Setien's future on the line.

The tie is balanced at 1-1 following February's first leg in Naples, with the victor earning a ticket to the final eight tournament in Lisbon later in the month, a solution to the competition being disrupted by the Covid-19 pandemic.

Even though the draw was not the worst result for Barca, their performance was slammed by captain Lionel Messi, who declared they would have no hope of winning Europe's top prize if they continued to play as they did in Naples.

Messi's damning assessment of the team came home to roost when the season re-started after the coronavirus stoppage and Barca surrendered the league title to Real Madrid, prompting the captain to launch a new tirade against the team.

The Argentine's outburst was interpreted as a swipe against Setien, who had never managed a team in the Champions League until he succeeded Ernesto Valverde in January and ended the campaign shorn of credit.

Even though president Josep Maria Bartomeu gave Setien a vote of confidence ahead of the second leg, it is hard to see the coach surviving a potential elimination to Napoli.

After all, the Champions League has become an obsession for Barca ever since their last triumph in 2015, while Valverde was dismissed due to his inability to steer the team to European glory even though his side won back-to-back league titles.

The Catalans will be without the suspended Sergio Busquets and Arturo Vidal but are boosted by the return of Dutch midfielder Frenkie de Jong and French forwards Ousmane Dembele and Antoine Griezmann.

"The first leg was a difficult game for us, they put a lot of men behind the ball and it was not our best game or result but I believe we can do better against them now," De Jong told Barca's website.

Napoli meanwhile are sweating on the fitness of forward Lorenzo Insigne after he hurt a thigh muscle in his team's last game of the season as they came seventh in Serie A, their worst domestic finish since 2009.

These were the details of the news Napoli decider make or break for Setien's haphazard Barca for this day. We hope that we have succeeded by giving you the full details and information. To follow all our news, you can subscribe to the alerts system or to one of our different systems to provide you with all that is new.