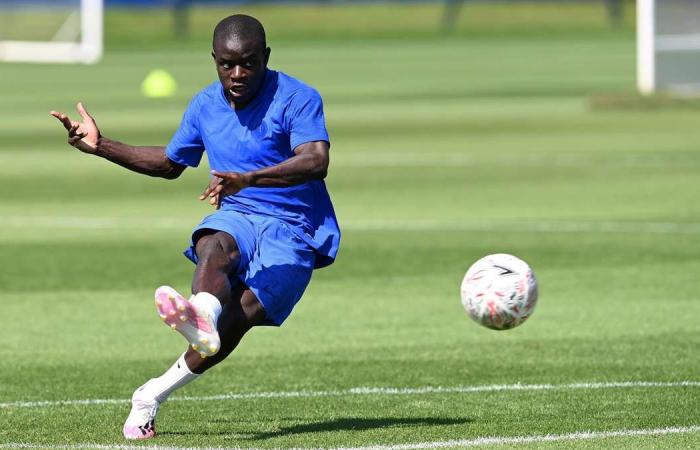 Thank you for your reading and interest in the news From N'Golo Kante to Ross Barkley: Assessing 10 Chelsea players who could leave this summer and now with details

Hind Al Soulia - Riyadh - N’Golo Kante. After three exemplary seasons where his importance to Chelsea was only surpassed by Eden Hazard, Kante had a campaign to forget in 2019/20 as injuries limited the French midfielder to 27 appearances. Lampard remains a huge fan, describing the World Cup winner as an “incredible player” and “huge for the club” so any exit would likely be out of his manager’s control or if a large offer is made. Verdict: Stays. Getty Images

Kepa Arrizabalaga. The world’s most expensive goalkeeper has so far failed to live up to his price tag. A shaky debut season can be forgiven, and the Spaniard actually produced his best run of form after his League Cup final mutiny – an act that could have ended his Chelsea career. This season, though, Kepa has regressed and has seemingly lost the trust of his manager. Chelsea’s dilemma now is how to offload an €80m (Dh346m) keeper on €170,000 per week. Verdict: Leaves, likely on loan. AP Photo

Kurt Zouma. After two seasons on loan, at Stoke City and Everton, Zouma returned to the Chelsea fold and played more minutes than any other central defender in 2019/20. The Frenchman deserves great credit for bouncing back from a career-threatening injury in 2017 and staking his claim in the Blues first team, but his future could be determined by who Lampard is able to recruit as upgrades are available. Verdict: Stays. PA

Andreas Christensen. Considered very much the third, or even fourth, choice centre-back at Chelsea, having started six of the first seven Premier League games. The return to fitness next season of Fikayo Tomori is likely to limit Christensen’s game time further, particularly if a new centre-back arrives. There is sure to be interest in the Dane this summer. Verdict: Leaves. Reuters

Emerson Palmieri. Started the season as Lampard’s first-choice left-back but has slipped down the pecking order following the emergence of Reece James (allowing Cesar Azpilicueta to move to the left) and the switch to a back-three which brought Marcos Alonso into the fold as wing-back. A return to Italy the most likely outcome this summer. Verdict: Leaves. Reuters

Marcos Alonso. A vital component to Chelsea’s 2016/17 title-winning team, Alonso’s most recent campaign was a real mix – depending on which position he was deployed. At left-back, the Spaniard was a liability, but he remained a useful attacking outlet at wing-back. It does feel as though his Chelsea days are numbered, though, particularly if Ben Chilwell is signed from Leicester City. Verdict: Leaves. AFP

Tiemoue Bakayoko. The French midfielder was signed in 2017 from Monaco for €45m but spent just one season at Stamford Bridge before being shipped out on loan, first to AC Milan before spending last season back at Monaco. A move that has not worked out at all. Verdict: Leaves. Reuters

Ross Barkley. When he broke through the Everton ranks, Barkley was billed as the next big English star. While the midfielder has shown glimpses of his quality, he has undoubtedly fallen short of that early promise. To be fair, the 2019/20 season was his best in a Chelsea shirt, but Barkley is still not considered a first-choice player by Lampard. Unless a big offer comes in for him, it’s unlikely Lampard would force him to move. Verdict: Stays. AFP

Michy Batshuayi. It has been four years since the Belgian striker moved to Chelsea from Marseille for €35m and with a burgeoning reputation. In that time, though, Batshuayi has never managed to establish himself as the lead striker and has spent three separate loan spells away from the club. Surely this is the summer he leaves for good. Verdict: Leaves. AFP

Willian. Chelsea’s experienced winger has enjoyed one of the most productive seasons of his career, producing 11 goals and nine assists across all competitions. Lampard has made it clear he wants the Brazilian to stay but the club and player remain at loggerheads over a new contract: Willian wants a three-year deal but Chelsea are only willing to offer two. At this stage, it appears Willian’s seven-year spell at Stamford Bridge is coming to an end. Verdict: Leaves. PA

These were the details of the news From N'Golo Kante to Ross Barkley: Assessing 10 Chelsea players who could leave this summer for this day. We hope that we have succeeded by giving you the full details and information. To follow all our news, you can subscribe to the alerts system or to one of our different systems to provide you with all that is new.