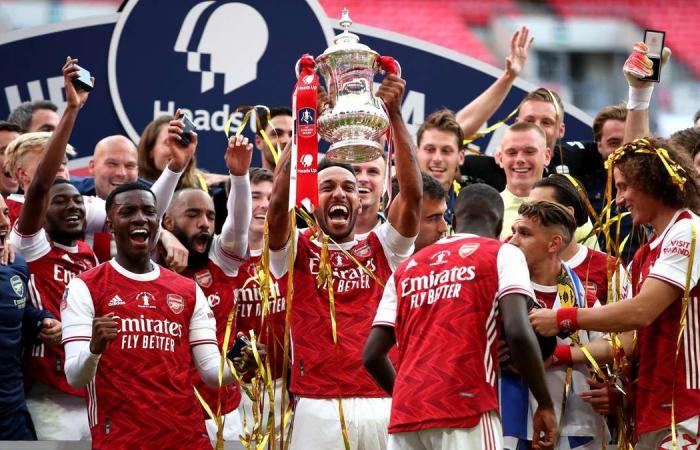 Thank you for your reading and interest in the news Pierre-Emerick Aubameyang 10, Dani Ceballos 8, Mesut Ozil 2: Arsenal 2019/20 season ratings and now with details

Hind Al Soulia - Riyadh - ARSENAL 2019/20 RATINGS: MANAGERS: Unai Emery – 3. After 18 months, the Spaniard was sacked at the end of November following a run of seven games without victory and with Arsenal eight points off the top four. His appointment brought optimism following the gradual decline under Arsene Wenger but Emery ultimately proved an ill fit. Reuters

Mikel Arteta – 8. Despite finishing 10 points off the Premier League top four, Arsenal now appear to be trending in the right direction under the former captain’s guidance. Then, of course, there’s the FA Cup win. A trophy in your first season as a manager is fine going. EPA

GOALKEEPERS: Bernd Leno – 6. Only eight clean sheets in 30 Premier League appearances, although much of that can be attributed to the defence in front of him. Prior to his season-ending injury, had a decent season and is assured of his place when fit. Reuters

Emiliano Martínez – 7. Has done well since stepping in for Leno in the league and has had the gloves throughout Arsenal’s march to the FA Cup. A reliable No 2. AP

DEFENDERS: Sokratis – 4. The Greek veteran has barely featured since Arteta arrived and contributed to the regular defensive shambles under Emery. Unlikely to be an Arsenal player next season. Reuters

Calum Chambers – 7. Desperately unlucky season for Chambers, who returned after a Player of the Season loan spell at relegated Fulham. Arguably Arsenal’s standout defender before injury struck at the start of the year. Shutterstock

Shkodran Mustafi – 5. After being largely ignored by Emery, the German has had some game time under Arteta and has actually put in a few decent performances. Still an accident waiting to happen, though. Reuters

David Luiz – 6. Almost a typical Luiz campaign, ranging from world class to schoolboy. Problem is, it’s been more of the latter this season. Put in a good performance in the FA Cup final. PA

Rob Holding – 6. Enjoyed a late run in the first team and played 90 minutes of the FA Cup final. Will hope he has done enough to convince Arteta of his worth ahead of next season. PA

Pablo Mari – 4. Has made just three appearances in all competitions, since joining on loan in January, due to an ankle injury. Apparently, that’s enough to earn a permanent move. Go figure. Reuters

Kieran Tierney – 8. The Scottish full-back had rotten luck with injuries this season, but the difference he makes when he plays is clear. A quality operator down the left flank, the early signs are promising. AP Photo

Sead Kolasinac – 6. For a player with cult status, it was a mediocre season for the Bosnian. Gets an extra point for squaring up to armed carjackers last summer. Getty Images

Hector Bellerin – 7. Another Arsenal defender to endure an injury-hit campaign, but after the Spaniard returned to the team, the Gunners looked stronger. His brilliant run started the move that led to the FA Cup final winner. PA

Ainsley Maitland-Niles – 7. Adapted well to being played out of position, covering for the injured Bellerin at right-back. Was a constant threat in the FA Cup final when moved to left wing-back (another unfamiliar position). His versatility proved very useful but will want more game time in midfield next season. EPA

MIDFIELDERS: Lucas Torreira – 6. One of Arsenal’s best players in his debut season last year. Has experienced a more subdued season this time round having lost his place in central midfield to Dani Ceballos. Reuters

Granit Xhaka – 7. It was an eventful season for the Swiss midfielder. He looked destined for the exit after the episode with the fans during the Crystal Palace game and was stripped of the captaincy. Bounced back well to prove his worth to Arsenal. EPA

Matteo Guendouzi – 5. Billed as the player Arsenal would build their next team around, instead the French midfielder looks set for the exit after being frozen out by Arteta following his behaviour against Brighton. Reuters

Dani Ceballos – 8. It took some adjustment and there was the injury that sidelined him for 11 games, but the Spaniard emerged as Arsenal’s best midfielder. A player of genuine quality, Arteta should do all he can to tie down the Real Madrid player for another season. EPA

Joe Willock – 6. A mainstay in Arsenal’s Europa League campaign, the 20-year-old midfielder was mainly used off the bench in the Premier League. Looks a bright prospect. PA

Mesut Ozil – 2. One goal, three assists, 22 starts in all competitions, involved in just five Premier League wins. Has not kicked a ball since the restart. These are hardly the stats befitting of the club’s highest-paid player. Arsenal’s evolution under Arteta has left Ozil behind, so where do club and player go from here? PA

FORWARDS: Gabriel Martinelli – 8. Arsenal’s breakthrough player of the season, the 19-year-old Brazilian scored 10 goals in 26 appearances across all competitions. A knee injury cut his campaign short but Martinelli looks every inch Arsenal’s next big star. Reuters

Nicolas Pepe – 6. Given the club record fee and excitement that surrounded his arrival, the Ivorian winger’s debut season was mediocre at best. Eight goals and 10 assists across 42 games in all competitions is an ordinary return for a player of his undoubted talent. After a year to settle, should find another level next season. Getty Images

Reiss Nelson – 6. Restricted to 11 starts in all competitions and struggled to make much of an impact, contributing three goals and three assists in 24 total appearances. A talented player and at just 20 years old, has a bright future ahead. EPA

Pierre-Emerick Aubameyang – 10. This rating was a 9 prior to the FA Cup final before he scored both goals at Wembley to lead Arsenal to victory. Another superb season for the Gabonese star with 29 goals in 44 appearances. His contract expires next summer and the general consensus among Arsenal fans is ‘give him whatever he wants’, which seems fair enough. EPA

Alexandre Lacazette – 7. A decent enough season for the French striker with 12 goals and seven assists over 39 appearances but there is a lingering sense that he should be producing more. EPA

Eddie Nketiah – 6. Recalled from his loan spell at Leeds at the end of January, Nketiah chipped in with six goals in 19 games. Another from Arsenal’s Academy that looks set for a bright future. AP Photo

These were the details of the news Pierre-Emerick Aubameyang 10, Dani Ceballos 8, Mesut Ozil 2: Arsenal 2019/20 season ratings for this day. We hope that we have succeeded by giving you the full details and information. To follow all our news, you can subscribe to the alerts system or to one of our different systems to provide you with all that is new.