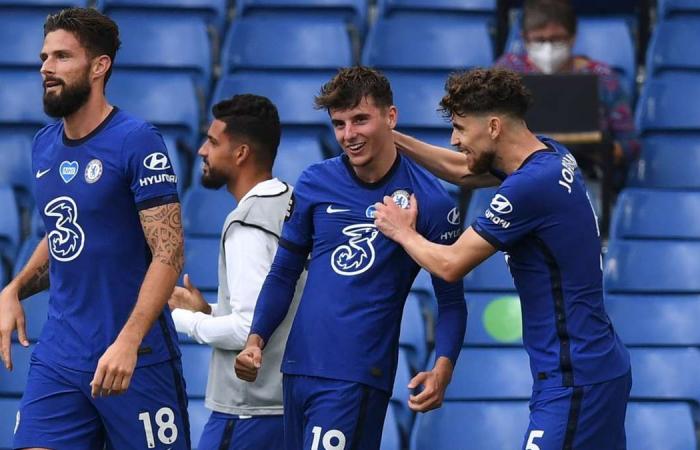 Thank you for your reading and interest in the news Mason Mount 9, Olivier Giroud 8, Raul Jimenez 6: Chelsea v Wolves player ratings and now with details

Hind Al Soulia - Riyadh - CHELSEA RATINGS: Willy Caballero – 7: A passenger for most of the match but was alert the few times he was needed. Will definitely have the gloves for the FA Cup final. PA

Cesar Azpilicueta – 8: Chelsea’s Mr Consistent lived up to his reputation once again. Barely put a foot wrong and has developed a great understanding with James down the right flank. Reuters

Antonio Rudiger – 7: A day when Chelsea needed the German to cut out the errors and he did just that. Was touch tight to the Wolves forwards and didn't give them an inch. Would’ve earned an 8 were it not for his ridiculous theatrics when brushed by Jimenez. EPA

Kurt Zouma – 8: Rock solid performance from the Frenchman. Has emerged as Lampard’s most trusted centre-back this season. AFP

Reece James – 8: The 20-year-old plays with the composure of a seasoned veteran. A threat in attack and positioned himself well in defence. EPA

Marcos Alonso – 7: Provided a constant outlet in attack down the left but was caught out a few times in defence. A typical Alonso performance. PA

Jorginho – 7: Tidy in possession, always looked for space to receive the ball, and full of passing. We shouldn’t expect anything less from the Italian. PA

Mateo Kovacic – 8: Once again the best midfielder on the pitch, the Croatian was everywhere and produced his typically brilliant distribution. Getty

Christian Pulisic – 7: Always posed a threat and looked dangerous on the break, but couldn’t quite convert his trickery into chances. AFP

Olivier Giroud – 8: Another game, another goal from the Frenchman. Chelsea’s key player since the restart. "Class as always," said his manager. AP

SUBS: Tammy Abraham – (On for Giroud 78’) 7: Terrorised Wolves with a hat-trick in the reverse fixture and looked to be in the mood again but wasn’t given enough time to really impact the game. Reuters

Callum Hudson-Odoi – (On for Pulisic 78’) NA: A quiet cameo from the teenage winger. AFP

Pedro – (On for Mount 85’) NA. A ceremonial run-out in what was likely the Spaniard’s final game for Chelsea. Getty Images

Ruben Loftus-Cheek – (On for Kovacic 85’) NA. Brought on for fresh legs in midfield for the final few minutes. PA

WOLVES RATINGS: Rui Patricio – 6. Could do little with either goal but didn’t have many other saves to make. Reuters

Willy Boly – 7. Had his hands full with Pulisic and Alonso and stuck to his task well. EPA

Conor Coady – 6. Had a decent game but got turned inside out by Giroud for Chelsea’s second goal. EPA

Romain Saïss – 6. Defended well when Wolves stayed compact for much of the game but was exposed during the counter that led to Giroud’s goal. Getty Images

Matt Doherty – 6. Irish full-back caused some problems during the first half but was subbed off as part of a triple change. PA

Jonny – 5. One of Wolves’ standout players of most of the season but couldn’t make his stamp on the game. AFP

Leander Dendoncker – 5. An ineffective game from the Belgian midfielder. EPA

Pedro Neto – 5. Little impact from the Portuguese winger before being subbed off at half-time. Reuters

Ruben Neves – 6. The classy midfielder was unable to impose himself on the game. Substituted just before the hour. AP

Raul Jimenez – 6. Took a battering all match but couldn’t conjure up the magic he so often has done this season. PA

Diogo Jota – 6. Like the rest of the Wolves team, struggled to influence the game. Had one tame shot straight at Caballero. EPA

SUBS: Adama Traore – (On for Neto 45’) 5: Brought on to do what he normally does but the Spaniard was given little space to produce his rapid breaks. EPA

Ruben Vinagre – (On for Jonny 58’) 6. Such was his impact on the game, there aren't any photos of him. Says it all. Reuters

Joao Moutinho – (On for Neves 59’) 6. Part of a triple substitution that made little difference on the game. AP

Daniel Podence – (On for Doherty 59’) 6. Read the Moutinho rating. EPA

These were the details of the news Mason Mount 9, Olivier Giroud 8, Raul Jimenez 6: Chelsea v Wolves player ratings for this day. We hope that we have succeeded by giving you the full details and information. To follow all our news, you can subscribe to the alerts system or to one of our different systems to provide you with all that is new.