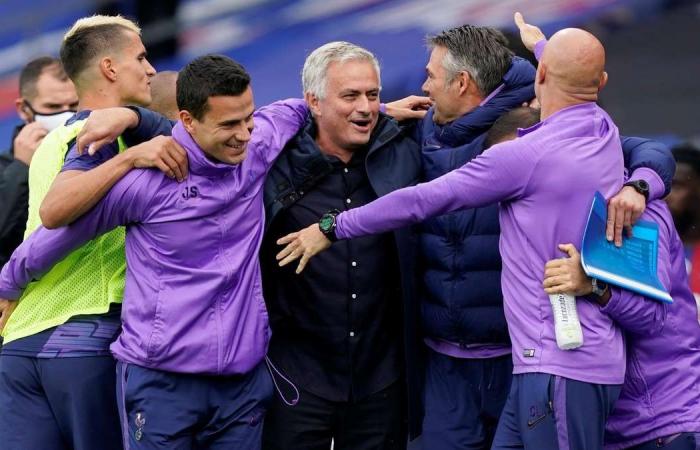 Thank you for your reading and interest in the news Jeffrey Schlupp 8; Serge Aurier 8, Harry Kane 7: Crystal Palace v Tottenham player ratings and now with details

Hind Al Soulia - Riyadh - Vicente Guaita – 6: Did well not to fell Lucas Moura for a penalty that could have cost Palace the game at the end of the first half. Getty

Joel Ward – 7: Helped drive Palace’s best phase of play after the break, and hit the post … albeit with a cross. AP

Scott Dann – 6: Looked ready for the end of the season, especially once he was nutmegged by Harry Kane late on. Getty

Cheikhou Kouyate – 7: Out of position once or twice, but otherwise did a fine job filling in again at centre-back. AP

Tyrick Mitchell – 6: The youngster was given a tough time by Moura, and received a yellow card for his troubles. PA

James McArthur – 6: Let Tottenham’s midfield know they were in for a battle with some robust challenges early in the piece. AP

James McCarthy – 6: Yellow carded early on for a foul on Son Heung-min, which put him on edge for the rest of the game. Reuters

Andros Townsend – 7: Looked very keen to make an impression against his boyhood club. Occasionally over eager when well placed. AP

Jeffrey Schlupp – 8: His second goal of the season was Palace’s first in seven and a half games against Spurs. Tenacious throughout. Getty

Jordan Ayew – 6: Did a decent impersonation of Christian Benteke, holding up the ball well, but wasted a good chance. Getty

Jairo Riedewald – (On for McArthur 70') 6: Barely had a chance to make a difference. Getty

Luka Milivojevic – (On for Schlupp 85'): NA, His cross from a free-kick found Dann well placed, but he headed wide. PA

Hugo Lloris – 6: No chance with Schlupp’s blazing shot from point-blank range, and he had little else significant to do. EPA

Serge Aurier – 8: Continues to amaze, performing to such a high level after the death of his brother. Diligent throughout. Reuters

Toby Alderweireld – 6: Picked up a rare yellow card for a foul on Ayew, and was nearly shown up late on when Dann beat him to a header – but headed wide. Reuters

Eric Dier – 7: Looked confident after his return from suspension. Powerful in the tackle, and showed a midfielder’s range of passing. AP

Harry Winks – 6: Typically tidy but lacked the oomph Tottenham needed to counter Palace once the hosts gained the ascendancy. PA

Moussa Sissoko – 7, Was only a matter of time before he succumbed to a muscle injury given the incredible workload he gets through. AP

Lucas Moura – 8: One fine run in the first half nearly brought a sensational goal, and he was a constant threat down the right flank. Getty

Giovani Lo Celso – 7: Intricate footwork followed by a canny through ball set up the opener for Kane. Substituted on the hour. Getty

Son Heung-min – 6: Spurs’ player of the season struggled to prise many openings, and looked fed up to be replaced with 10 minutes to go. EPA

Harry Kane – 7: His 13th-minute goal looked like it was going to be enough for the win at the interval, but Tottenham lapsed in the second half. AP

Steven Bergwijn – (On for Lo Celso 60') 6: Scarcely registered anything in an attacking sense, but defended well against Zaha. EPA

Oliver Skipp – (On for Sissoko 80') NA: A sign of Mourinho’s ambitions was that he brought midfield screener Skipp near the end. Reuters

These were the details of the news Jeffrey Schlupp 8; Serge Aurier 8, Harry Kane 7: Crystal Palace v Tottenham player ratings for this day. We hope that we have succeeded by giving you the full details and information. To follow all our news, you can subscribe to the alerts system or to one of our different systems to provide you with all that is new.