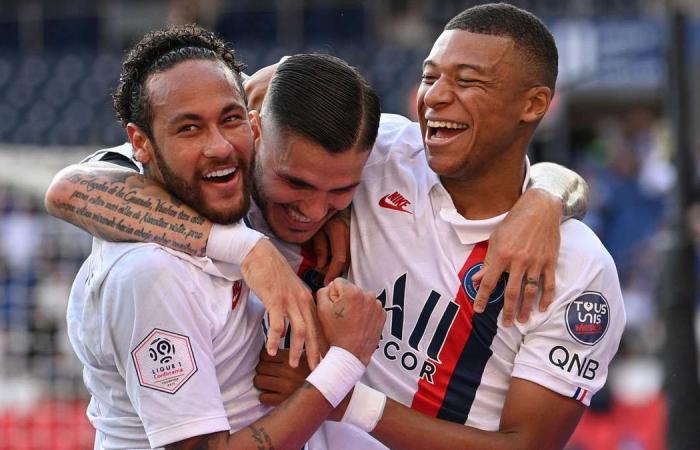 Hind Al Soulia - Riyadh - Having put themselves firmly at the very back of the queue for the so-called Project Restart, France’s football authorities will on Friday night unveil a progressive glimpse of how post-pandemic sport could come to look.

A high-profile match with thousands of spectators will take place just outside Paris: a small oasis in the desert of behind-closed-doors football.

Across the world’s most popular sport, matches in empty stadiums are generally a condition of matches being allowed to take place at all. But for the final of French Cup, between Paris Saint-Germain and Saint-Etienne, between three and four thousand spectators will be scattered, at social distance from one another, around the 80,000 seats at the Stade de France.

It might have been a few more, with France’s public health authorities allowing up to 5,000 in the vast arena, but Saint-Etienne will not be using any of their official allocation of 900 tickets because the club’s main supporter groups have boycotted the occasion, complaining about the low number of permitted spectators.

Back in March, the notion of any elite match in France, with any audience at all, seemed unlikely for at least six months. The French government, in contrast to Germany, England, Spain and Italy, suspended all team sport until September as the coronavirus swept through the country.

The ban has only been slightly eased. Friday night’s Cup final will be followed, in a week’s time, by the League Cup final, between PSG and Olympique Lyonnais. Ligue 1 and the divisions beneath were declared closed for 2019-20 back in April, with most clubs having played 28 of the 38 scheduled fixtures.

PSG, who were 12 points clear of Olympique Marseille with a match in hand, were awarded the title. They have now been champions in seven of the last eight seasons.

The wealthy Parisians have won four of last five French Cups, too, and so it would be fair to report that Friday’s contest will probably start with a higher ratio of empty seats to occupied ones than the ratio of people who sincerely believe Saint-Etienne – who were 17th in Ligue 1, four places off the bottom, at the closedown – can carry away the trophy.

But ‘Les Verts’ – the Greens – can draw some confidence from a significant precedent. The last French Cup final of the pre-pandemic era produced a sensational upset, Rennes beating PSG on penalties after a see-saw 120 minutes.

A 2-0 PSG lead turned into 2-2, with PSG rattled and Kylian Mbappe picking up a late red card that meant he was not among the penalty-takers for the shoot-out. Chris Nkunku, brought on in the last minute of extra time to take a penalty, skied his effort, delivering the Cup to Rennes.

Mbappe, who turned 21 in December, is older and perhaps wiser now. In the days after the 2019 Cup final, he was publicly ruminating on a possible departure from PSG, who he joined in 2018 from Monaco for a fee that would rise well above €100 million (Dh425.7m), and explicitly stating that a club outside France might be the only vehicle for his ambitions. His posture in recent weeks has been more settled. He would be at PSG next season “whatever happens”, he confirmed in an interview ahead of the Cup final.

That sounds a safe forecast. The sport’s economy has nosedived as a result of the pandemic and a summer transfer window that at the outset of 2020 looked likely to be animated by keen interest from Real Madrid in Mbappe and another round of shadow-boxing between Barcelona and PSG over Neymar will probably be rather more restrained.

One superstar is on his way out of PSG, though. Edinson Cavani, scorer of 200 PSG goals in his seven seasons in Ligue 1, has effectively left and, at 33, will be taking his refined penalty-box instincts outside France, most likely to Spain’s La Liga or the English Premier League.

Cavani has not extended a PSG contract that expired in June to cover the period of the two Cup finals or next month’s last-eight of the postponed Champions League.

One player who has added two extra months to his deal is Thiago Silva, another giant of PSG’s transformative decade. The Brazilian defender, 35, is expected to depart in September, but hopes to sign off his eight years with PSG with two Cups and a first Champions League title.

PSG will face Atalanta in the quarter-final and either Atletico Madrid or RB Leipzig in the semi. Unlike PSG, all of those clubs have been in league action over the past two months.

The French champions will discover in the next eight days whether their lack of competitive football since March has left them rusty or thoroughly refreshed.

These were the details of the news Paris Saint-Germain and Saint-Etienne set for unique French Cup final showdown for this day. We hope that we have succeeded by giving you the full details and information. To follow all our news, you can subscribe to the alerts system or to one of our different systems to provide you with all that is new.