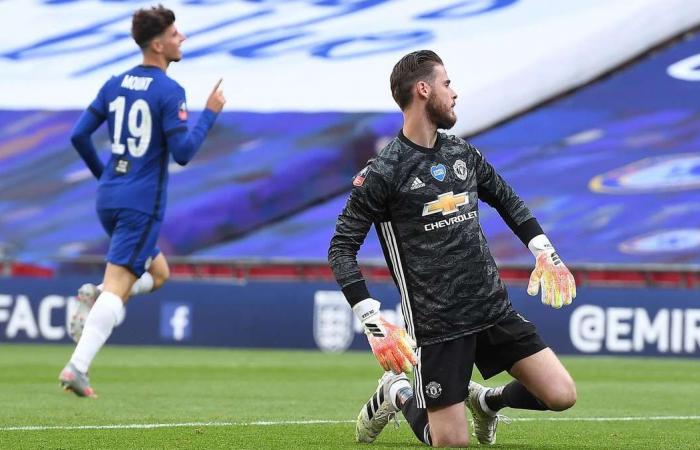 Hind Al Soulia - Riyadh - David De Gea. 3. Howler of an error for Mount’s goal. Good save from Giroud – after conceding a sloppy one from Frenchman. PA

Aaron Wan Bissaka 5. One of many who struggled in United’s changed system. Taken off. Reuters

Harry Maguire 4. Puts his head where it hurts and had the bandage to show for it. Did that unbalance him? Scored an own goal. Reuters

Victor Lindelof 5. Poor for Giroud’s opener. Needs to do more to convince that he’s going to be a long term centre half. EPA

Eric Bailly 5. A sad sight watching him stretchered away after a passive first half from United. Unlucky. AP Photo

Fred. 4. As ineffective as the whole team. Won’t be happy with that. Like every fan then. EPA

Nemanja Matic 5. Found it difficult in changed system to match Chelsea up. More success for Chelsea in the FA Cup than he’d had with United. Reuters

Daniel James 4. If you get a chance you have to take it. Didn’t. Has to prove he’s good enough to play for Manchester United. Reuters

Bruno Fernandes 6. Best of a bad bunch. Always wants the ball. Cool on the penalty. AFP

Marcus Rashford 5. Poorest game since resumption of football. Limited service to him, but he offered limited movement too. EPA

CHELSEA: Willy Caballero – 7. Few saves to make but was alert to any dangers and quick to come off his line to clear up balls over the top. Had the occasional flap at crosses and couldn’t do anything about the penalty. Getty Images

Cesar Azpilicueta – 8. Lovely low cross to set up Giroud’s opening goal and was untroubled on the right side of the three-man defence. Getty Images

Kurt Zouma – 8. The Frenchman can blow hot and cold but at Wembley he was certainly on his game. Reuters

Antonio Rudiger – 8. A reminder of how good he can be. Solid as a rock at the back (save for one clumsy challenge on the edge of the area). Forced Maguire’s own goal for Chelsea’s third. AFP

Marcos Alonso – 8. How can one player be so ordinary at full-back and absolutely superb at wing-back? Introducing Marcos Alonso. AFP

Jorginho – 6. Plenty of typically nice, short passes and touches but didn’t impose himself fully on the game. The Italian didn’t need to playing alongside Kovacic. Reuters

Mateo Kovacic – 8. Bossed the midfield. Drove his team up the pitch, always in space for a pass, and ran all day to provide a presence in defence and attack. Getty Images

Mason Mount – 7. Doubled Chelsea’s lead right after the break, although the goal owed just as much to a De Gea blunder. Full of high pressing. EPA

Willian – 6. Quiet game from the Brazilian on the attacking front but always offered an outlet and tracked back fulfill his defensive duties. PA

Olivier Giroud – 8. Neat finish to score the opener to continue his fine form since the restart. EPA

SUBS: Tammy Abraham (80’) – 5. Had little time or opportunity to impact the match as Chelsea looked to close out the victory. Getty Images

These were the details of the news David de Gea 3, Mateo Kovacic 8, Olivier Giroud 8: Manchester United v Chelsea player ratings for this day. We hope that we have succeeded by giving you the full details and information. To follow all our news, you can subscribe to the alerts system or to one of our different systems to provide you with all that is new.